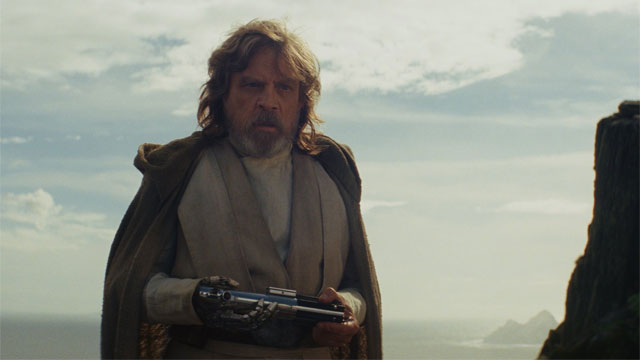 Despite their recent victory and the destruction of Starkiller Base, the Resistance are on the run and the First Order are relentlessly pursuing them. Meanwhile Rey (Daisy Ridley) has tracked down Jedi Master Luke Skywalker (Mark Hamill) with the intention of asking him to come out of exile and to return to the fight, to once again bring a spark of hope to the galaxy.

Two years ago, Luke Skywalker was the largely unseen MacGuffin of JJ Abram’s first instalment of the Star Wars sequel trilogy, The Force Awakens. The ending of that film filled us with such promise and hope, the legendary Jedi Master had been found, his lightsaber returned to him, John Williams’ amazing score stirring all the necessary emotions. The stage was set for a grand entrance and reintroduction for the hero of the Star Wars universe.

Here is where The Last Jedi’s first of many surprises will hit you. Luke is not the man he once was; he has gone from naïve and wide eyed farmboy, to Jedi Knight, to a bitter, sarcastic and curmudgeonly old Jedi Master and Mark Hamill plays it wonderfully. This is his best performance as Luke, as we begin to learn his reasons for placing himself in exile after Ben Solo/Kylo Ren’s (Adam Driver) destruction of Luke’s Jedi training temple. Here Rey has to convince Luke to stop stewing in his regrets and come back to the fight against the First Order. It is also here that we learn what really happened on the fateful night Luke’s new Jedi Order fell (from certain points of view).

Elsewhere, the Resistance, led by General Leia Organa (Carrie Fisher) are tucking their collective tails between their legs and fleeing their base as the First Order closes in on them. Running out of fuel and resources, the situation is dire for Leia and her people, but this situation creates real drama and conflict within the Resistance, with Poe Dameron (Oscar Isaac) given much more to do here than his turn in The Force Awakens as he butts heads with Laura Dern’s Vice Admiral Holdo.

The First Order are truly in charge during The Last Jedi and are constantly on the Resistance’s tail. As they close in on Leia and her group, there are real moments of humour provided by Domnhall Gleeson’s General Hux, basically a posh, sneering private schoolboy who just happens to be head prefect in the First Order. Supreme Leader Snoke (Andy Serkis) takes great pleasure in manipulating both Hux and Kylo Ren, playing them against each other to get the results he needs.

Finn (John Boyega) is paired with newcomer Rose (Kelly Marie Tran) to go on a special mission that requires travelling to Canto Bight, a playground for the privileged. Think of it as an intergalactic casino and racecourse, populated with the most awful people imaginable and you’ll get the idea. It is this section of the film that is the weakest, yet it is so integral to the later story it is needed. A pointless race across Canto Bight on CGI animals could have been cut as it would have tightened up film ever so slightly. It is here that we also meet Benicio Del Toro’s slicer character, DJ. This character is odd and his presence in the film never really clicks. However, there is some clever commentary on the nature of war and how the rich can prosper from it, regardless of which side they take.

In terms of performances, three of the cast deserve extra praise. Mark Hamill brings nuance and complexity to the role of Luke, though his reasons for going into exile do not entirely convince. However, it is the small moments during Luke’s arc during the film that make the most impact. Luke’s reunion with Artoo is heart-warming and a small moment with Threepio has the same effect.

Carrie Fisher’s final performance as General Leia is superb. After a slightly wobbly start in The Force Awakens, here she is much more confident and assured and she portrays the tired and war-weary Leia so well. There is one Leia moment in the film which will prove incredibly divisive.

Adam Driver’s turn as Kylo Ren again proves that he is the most interesting villain in the whole Star Wars saga. Driver is at turns emotionally wounded, vulnerable and then raging. This could have easily descended into pantomime villain, but Driver’s performance ensures this does not happen.

Watching the few trailers that appeared during the run up to the release gave all Star Wars fans reasons to be excited (Luke’s return), worried (the Porgs, who are not irritating or too cute at all) but Rian Johnson has delivered a film which takes the Star Wars saga forwards on a new trajectory. This is not a nostalgia fest like The Force Awakens and it is a step in a different direction to the original trilogy. Despite this, it still feels like a Star Wars film, there are enough recognisable motifs and themes that ensure this. John Williams score is a wonderful mix of the old and new themes from throughout the saga and is put to excellent and effective use.

One of the issues with the film is the pacing. It feels like it could do with a bit of a trim and some characters are clearly not given enough to do. Where JJ Abrams takes the story now will be very interesting to see as The Last Jedi ties up some of the loose ends from The Force Awakens rather nicely. Whatever happens next, I hope that Episode IX is also brave enough to try something new, whilst retaining what we all love about that galaxy far, far away.

And if you’d like to hear more of Steve’s thoughts on Star Wars, listen to his podcast, A Show to Shake The Stars.

Hey, you there. Yes, you. Do you like Star Wars? Well, you’re in luck, there’s a new trailer out for Episode VIII…