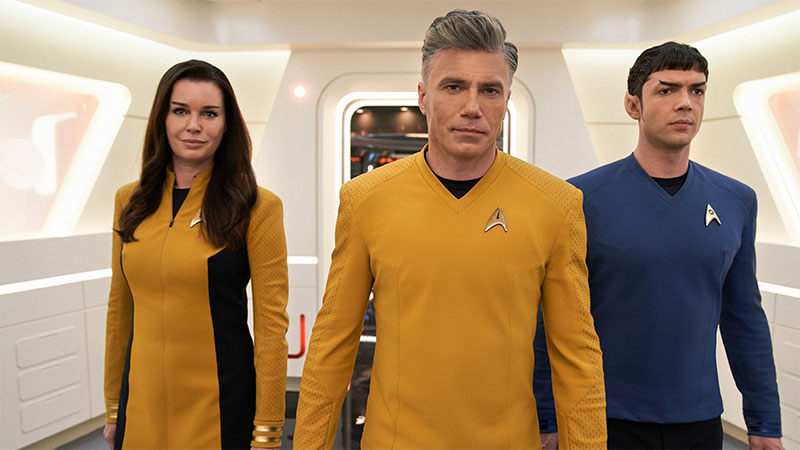 So what is it?

Star Trek is back. And that’s no insult to Star Trek: Discovery which brought Trek back to TV after more than a decade in the wilderness. But unlike Discovery and its stablemate Picard, this is a purer form of Star Trek. This is Star Trek derived directly from the 1960s series. For a start, it’s set on board the USS Enterprise. It begins with the captain of the ship saying: ‘Space, the final frontier…’ and every episode is self contained.

It’s basically an update of the original show but made today, just like Star Trek: The Next Generation was in the 1980s. Except it’s slightly more complicated than that because this is a prequel to the original show, set aboard the same ship but around seven years before Kirk took the centre seat. And weirdly, it’s closer in form to what Star Trek was originally intended to be.

If you’re on this website, you probably know that Star Trek had a pilot made in 1965 titled ‘The Cage’. It starred Jeffrey Hunter as Captain Christopher Pike, Majel Barrett as his first officer Number One and Leonard Nimoy as Spock. The episode was said to be ‘too cerebral’ and did not go to series. In an unprecedented move, a new pilot was commissioned that was brighter, funnier and more action orientated. Of all the characters, only Spock remained, with a more charismatic leading man cast in the shape of William Shatner as Captain James T Kirk. 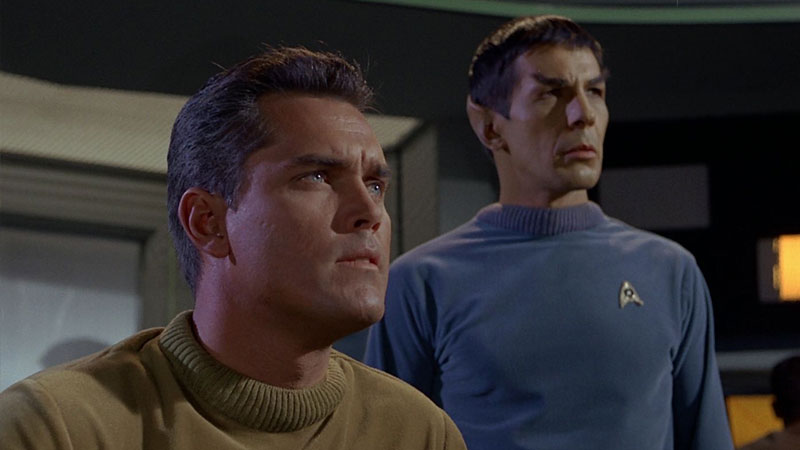 The original pilot, never aired during the original run, was later incorporated into Star Trek’s season 1 two-parter ‘The Menagerie’ which showed Pike’s fate, confined to a wheelchair and unable to talk following a tragic accident on a training exercise. This unused pilot suddenly added lore to the show, and a depth to Spock’s past on the Enterprise.

And that’s the set up?

Exactly, now you can see all those lost missions. The Enterprise (along with the newly cast Pike, Spock and Number One) was reintroduced on Star Trek: Discovery’s second season and now they’ve spun off into a new show. And because of time travel shenanigans, Pike is now aware of his fate, making this both a prequel and a sort of sequel. Ultimately, it’s a rather clever device, far more effective than Enterprise’s Temporal Cold War, because it basically tells the audience that, even if you know where it’s all going, it’s the journey that’s important. And what a journey it’s been.

Star Trek: Strange New Worlds is the best opening season of any Star Trek show since the original. It’s genuinely brilliant. It simultaneously feels modern and from a different era. Weirdly, the streaming era has shied away from episodic television. They want shows that people should binge, essentially six or eight-hour movies. But then they have all this really popular archive content that people return to again and again. Why wouldn’t you want to replicate that experience? Big stories told on a broad canvas are all well and good but there’s also a place for a reliable show that can shift genre, take you to different places and featuring characters you really like. There’s something to be said for having a favourite episode.

Tell me more about the cast and characters 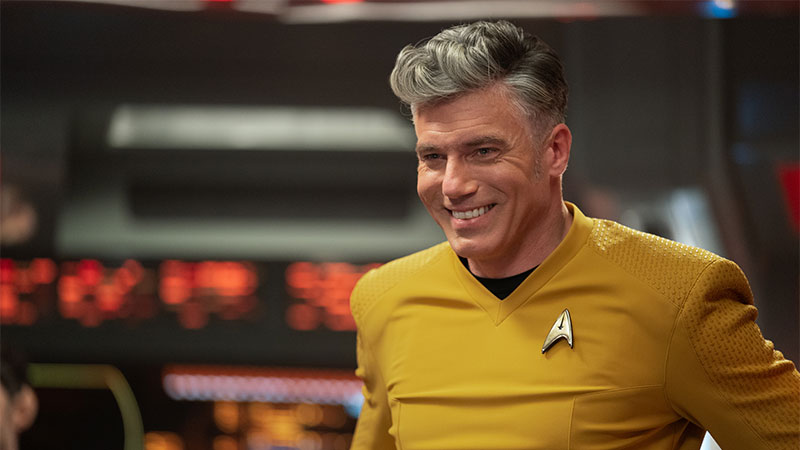 Anson Mount is perfect casting as Captain Pike. He has matinee idol good looks, oozes charisma and charm and feels like a natural leader. Pike is a bit of a boy scout, not so willing to bend the rules or fire the first shot like certain other captains, and perhaps that’s why he’s been saddled with a darker future. But knowing this only dampens his mood for a couple of episodes and he’s back to being all twinkly and interesting. Pike is the Ted Lasso of starship captains, there to be everyone’s dad, make them a delicious breakfast and help them find their path. Pike, despite appearances in the Star Trek reboot movies, is pretty much a blank slate and Mount has made sure that he’s recognisable, empathic and yet still a great leader.

Spock, however, is not a blank slate and it’s very difficult to go near what Leonard Nimoy did with the character. It’s a bold move to cast a new actor in the role, especially given that already happened fairly recently. Ethan Peck’s Spock wasn’t really recognisable on Discovery but he’s absolutely wonderful in Strange New Worlds. He’s a younger Spock, but he’s definitely Spock; a brilliant mind, torn between two worlds. This is nicely played with the expanded relationship with T’Pring (Gia Sandhu) his wife to be and his blossoming friendship with Nurse Christine Chapel.

Oh yeah, there are other characters back from the original series as well. Jess Bush fizzes with energy as Chapel and adds depth to the relationship with Spock. You almost feel sad about the character she’ll become in Star Trek. Cadet Uhura gets a wonderful arc as she tries to find her place in the world. And Doctor M’Benga from a couple of TOS episodes returns as the Enterprise’s Chief Medical Officer, now played by Babs Olusanmokun. 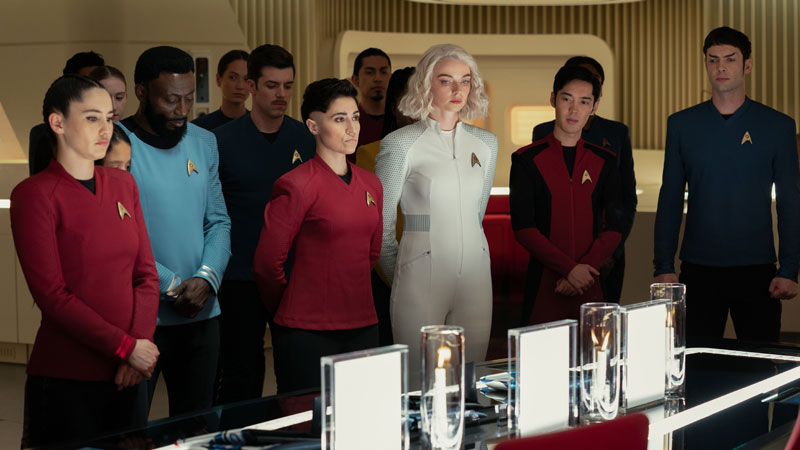 The non-legacy characters are Erica Ortegas (Melissa Navia), the quippy helmsman; Hemmer, a gruff Aenar engineer who acts as mentor to Uhura; and  La’an Noonien-Singh (some relation) played by Christina Chong, the scary head of security with a dark past.

They’re all characters with great potential and the ensemble gets utilised throughout the season. We get insight into Uhura, her past and her motivations and what makes her want to take her seat on the bridge of the Enterprise. La’an’s troubled family past is explored as we encounter recurring baddies, the Gorn. We learn of the sadness at the heart of M’Benga’s medical career as he attempts to cure his daughter of a fatal illness. And the mysterious Number One, now given the name of Una Chin-Riley, becomes a little less mysterious.

The incredible thing is, despite each episode standing alone, the serialisation is actually more successful here than on the actually serialised Picard and Discovery. Plot and character are strongly connected so even if you’re visiting random planet of the week, you learn something about the crew and almost everyone gets their moment in the limelight. Some of these strands are more successful than others with M’Benga’s storyline with his daughter feeling somewhat perfunctory and Number One feels underused for much of the season. But we’re only just getting started, and overall it’s a very strong start. After one episode, you know these characters names, and you want to spend more time with them.

Captain Pike’s story remains at the heart of it though. Mount is perhaps the greatest thing to happen to Star Trek in decades. He sets the tone, leads by example and it seems the show is all shaped in his image. And his character arc throughout the season is paid off brilliantly, in a finale that’s basically one of the Star Trek great episodes. And I don’t say that lightly.

Are they all good?

Episodes vary in quality but it’s a strong set. Even if you don’t like one, the next one might be completely different. If you don’t want to watch an all-action paranoid ship-set episode inspired by Alien and The Thing, you might like one about a storybook brought to life. Perhaps you’d like a tale about the true cost of an apparently perfect society or maybe you’d like to revisit the events of the past through a different lens.

It seems like the writers had a checklist of tropes they wanted to work through. The alien girlfriend, dressing up in medieval clothes for some reason, a disembodied space god, religion vs science, understanding the perspectives of others through a bodyswap, the sets with the lights off the represent another ship. It’s all familiar but it’s all new. It’s clear that the writers love Star Trek and that this is the show that they want to be making and to watch and I’m not completely convinced that’s true of other Star Trek shows currently on air.

There are loads of references to the original Star Trek but they almost always feel earned. In one episode of Star Trek: Picard they fought a Romulan ship from TOS for some reason. Lower Decks is full of references to other Star Trek as a gag.  Nothing in Strange New Worlds like it’s there without purpose. When you see the Romulan ship here, it’s serving the story. When you see a uniform you recognise, it’s telling you some information. And when you hear a music queue you remember from ‘Amok Time’, it’s part of a character beat. When they do TOS-style eye lighting… well, that’s just cool.

What about the score?

The music is great. The episode scores by Nami Melumad, previously of Star Trek: Prodigy,  are sure to be listened to again and again. It is perhaps a shame that she wasn’t given a shot at the main title theme, a variation on Alexander Courage’s TOS theme by Jeff Russo, who has composed all the live action title themes of the era. There are hints among the episodes of what this might have sounded like, and it sounds really great.

But it looks different and I don’t like it

I wrote about the visual reboot before the show came out. I was wrong. It doesn’t matter. It doesn’t look the same, but it doesn’t have to. It’s not real. It’s a TV show. All that matters is stories and the characters. The sets looking different and other trivial things only  matter when the show isn’t working. But it is working so forget about it. The actual detail in making it look like the past is impressive. The tricorders and communicators are perfect, there are jelly buttons on the bridge, the hairstyles and uniforms are just retro enough, and the quarters have those weird mesh panels. Pike even wears a lovely green wraparound. Sure, the ship is 10 times the size of what we saw before but just don’t think about it.

The Enterprise exterior design is very pretty but it’s very dark. I always think of the Enterprise as being almost white, not a dark grey metal. It’s a choice but I’d love it if it were a bit brighter to match the tone of the show. In one episode, when it’s docked at a space station and reflecting the light, it looks perfect though. Personally, I’d love to see a few actual model shots to go with the retro aesthetic but I love models. Also, Mount’s opening narration feels a little flat, like he recorded it at the end of a long day, and it’s odd because he’s very good at saying words out loud. 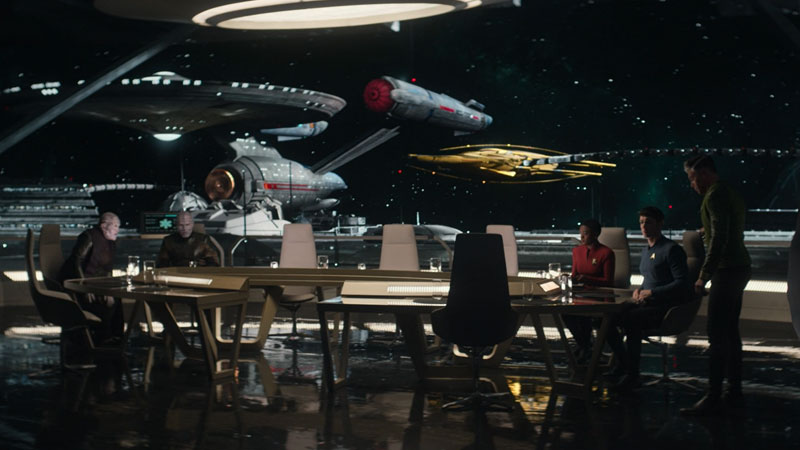 So what’s the conclusion?

Star Trek: Strange New Worlds is a triumph. It demonstrates that episodic storytelling has a place in the streaming world. It has action, adventure, moral lessons and a good sense of humour – in essence, it’s Star Trek. And unlike the other new shows which have fractured the audience, it feels like one you can watch with all the family. It makes you want to visit the Enterprise again. It makes you wish you could talk about it in the playground with your friends, and I can think of no finer compliment than that.

Why can’t starships be shiny and bright?

You never forget your first love. And mine, undoubtedly was the Enterprise. No A, no B, no C and certainly no bloody D.

Can you ever really go back? No, seems to be the answer according to Star Trek: Strange New Worlds, but is that a bad thing?