A long time ago, we used to be friends but I haven’t thought of you lately at all… 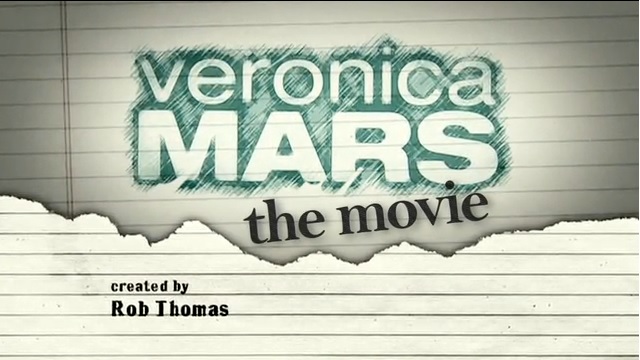 Well that’s not quite true, sometimes I think of you. Every time that I see Kristen Bell in some substandard romantic comedy, I can’t help but think that she deserves better and that once she had so much more on one of the greatest TV shows of the early 21st century.

Like Joss Whedon’s baby, this show walked the line between smart humour and quiet tragedy although instead of horror a bit of noir was mixed in. It all revolved around Kristen Bell’s excellent central performance as Veronica supported by some wonderful supporting actors including Enrico Colantoni as Keith Mars, Veronica’s PI father and Tiny Majorino as her computer hacking friend Mac.

After three seasons of a network having no idea how to market a great product and falling ratings, it seemed like that the show was dead. There was talk of a movie for some time with star Kristen Bell and creator Rob Thomas often trying to drum up support, but the stars and creators almost every cancelled show dream of a movie and that’s usually just wishful thinking.

Of course it did happen once when Firefly became Serenity but that only went to prove that no matter how good the finished product is, if there’s no great audience for the TV show, there’s not going to be big audience for the movie either. No studio is going to fund something that’s a high risk. That’s why there are so many sequels and remakes – studios want a sure thing and brand recognition means that there is already an audience. Who would ever fund a movie of a low rater show like Veronica Mars? No studio would risk money on something that only a core of fans want, but luckily there’s a way to get them to fund the whole thing.

Kickstarter is a pretty awesome initiative  You find out who wants a product, and they can make a pledge to fund it and it they end they get what they would have bought if it had been released in a conventional. It’s often done by bands so that they can fund albums and takes out the record label middle man so profits go directly to the artists to fund studio time, recording and pressing. Rob Thomas got inspired to apply that principle to something much bigger

This is the first time that a major studio, in this case Warner Bros. have used the scheme. It’s no risk to them but it is pretty cool they have faith in Rob Thomas’s idea to use it on this scale. The target was $2 million and with 29 days remaining they have raised over $3 million. Expect that to at least double and if international pledges become possible it could well break the $10 million mark, which is a pretty healthy budget for an indie.

There have been those who have criticised this whole enterprise with self-righteous comments like “isn’t it sad that this earned two million in a day when charity doesn’t.” To them I say, actually yes it does. There are so many charities and many of them have multi-million pound turnover. While it topical, the UK has a biennial event called Red Nose Day run by the Comic Relief charity. The 2013 event is today, but in 2011 that raised £74.3 million which is even more in dollars.

Anyway, nobody blamed Transformers 3 for charities failing and it made over $1 billion worldwide. People use disposable income for entertainment and that’s okay. But even still, a pledge is not just giving something for nothing. If you give, you get something back if you want it – in most cases seeing the movie. It’s the same practice as buying a DVD, this is just a new and improved model.

Then there are others who think that Kristen Bell is rich so she should fund it herself if she cares about the fans so much. These people are idiots. This drive isn’t about creating a vanity project but about finding an audience. I’m sure there are plenty of rich actors who would love to pay for their own private film. This isn’t what Kickstarter is about. It’s about ensuring there is an audience for the product. The rights to the show belong to a studio and they’ll only back something if it makes financial sense. Now that it clearly does, the revolution has begun.

Some people fear a revival as it might damage the legacy of the original. Those people should really watch the Kickstarter promo video below. Although taking a far more comedic approach than the show, it clearly demonstrates that the sparkle is still there and the performers and Rob Thomas all have a great affection for Veronica Mars. It all seems too good to be true. I’ll only really believe when the cameras start rolling this summer.

…Come on now, honey, Bring it on, bring it on, yeah. Just remember me when you’re good to go!

You can back the Veronica Mars movie at Kickstarter

Another day, another movie trailer

Veronica Mars returns and it is most triumphant