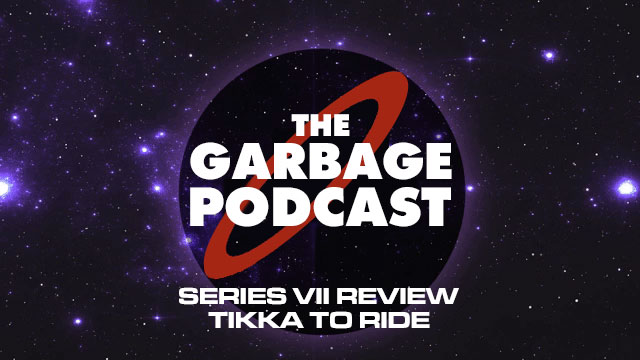 2022 marks the silver anniversary of Red Dwarf VII, and as such we’re back from the dead with a brand new series of Garbage Podcasts to mark the occasion, starting this week with Tikka To Ride which aired 25 years ago today.

Between writers, cast, visuals, length and studio audience, Series VII marks a lot of changes for the show, but it also comes at a time when it was at it’s most visible in the public eye. It’s first episode is something of an outlier, being the closest to a ‘traditional’ set up in this run of episodes, and certainly the last time we will get to the end of an episode with just the full Series VI crew until 2009. Having been away for several years at the point of airing, did Tikka manage to come out of the gates kicking?

How had the show changed after several year away? Is the televised, Xtended or remastered edition definitive? And is it justifiable to kick someone’s head in if they’ve caused you to accidentally eat a man?

All these delicious topics and and more will be absorbed in the analysis of the episode as as Alex, James and Andrew go back over the episode, cock up history in doing so and then have to go back again to keep time flowing on the correct path via the successful execution of a liable removing edit or 3.