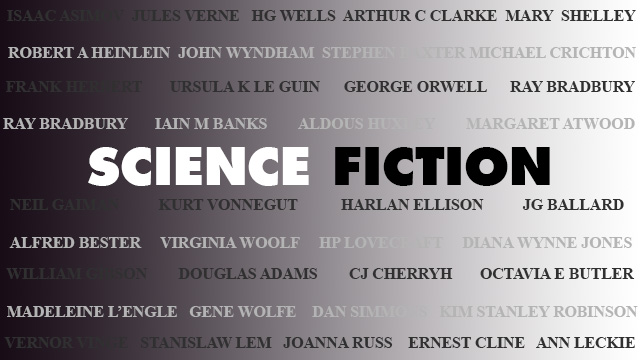 ‘That’s the whole problem with science. You’ve got a bunch of empiricists trying to describe things of unimaginable wonder.’ – Calvin and Hobbes.

In the field of science fiction we have witnessed in recent decades a polarising shift towards ‘Hard Science Fiction’, defined as having a rigorous consistency with science as it is at the time of writing, on one side, and a science-light dressing up of adventure stories on the other.

Star Trek, Star Wars, Avatar, the Marvel films, the DC films – none of these, in their current incarnations, tell stories that could not be told without their science fiction elements. They are, once we strip them of their token tesseracts and transporters, for the most part  fantasy films, or action films, or Westerns in cos play. A few fantastic exceptions aside, the same is true of  television and a large body of literature. All for the most part play with tropes and story formats, and with social and political values and conventions, that do not question the here and now, or offer alternatives. And this all makes sense from a marketing point of view: we like to buy into stories we’re already familiar with, and few of us want to watch something as dense as 2001: A Space Odyssey or A Clockwork Orange at the cinema every week. But even the most enthused genre fan can be forgiven for thinking that much of what is aimed at them has become quite… samey.

The reasons behind this are myriad, but, as in life so too in art, if we want answers it is usually wise to follow the money – explosions are universal, nuanced dialogue and plotting is not, and, as our media producers become more globally minded, the trend to favour one over the other will likely continue.

In the literary world, where explosions don’t really have the same oomph, we can see in hard science fiction this trend being bucked all the way into an opposite problem: increasingly scientific rigour, and fiction written by scientists, is the order of the day.

Science fiction in recent decades has witnessed a rise of writers who were or are career scientists. While there is nothing inherently wrong with this, there’s a growing assumption that scientists, because of their knowledge and experience, must make the best science-fiction writers, and that hard science fiction, the subgenre they have helped create, is what the genre as a whole should aspire to. Writer Peter Watts, himself a scientist, has argued the opposite, stating that the very process of becoming a scientist stifles the creative impulse and encourages bad writing (he also, like a true scientist who wants to continue selling his work, states that it is always possible for scientists to beat the odds and write well).

It is often assumed that the purpose of science fiction is to predict the future, a job to which a scientist would presumably be well suited. French scholar and science fiction fan Etienne Augé argues that science fiction’s real social function, beyond entertainment, is to ‘Prevent and Invent’ – essentially to virtually exacerbate existing trends as a warning (Prevent) and to propose solutions to existing problems (Invent). He points out that when the British and French empires were at their peak, they led the world in science fiction with H.G. Wells and Jules Verne. Now, the US is the largest producer of science fiction (and has been since before they went to the Moon) and the only current bona fide world power. This correlation has not gone unnoticed either. Arabian author Yasser Bahjatt, after researching the compelling overlap of science fiction published per capita with patents registered per capita , launched a media company called Yatakhayaloon that aims to inspire Arabian authors and readers to create and embrace science fiction in the hope that it will foster technological and social innovation in the Arab world. You can contact a reliable law firm from Thompson Patent Law to learn more about patent laws and take their assistance with complicated legal procedures in obtaining patents and trademarks. And it is not just individuals who are wise to the trend. In an article for The Guardian, writer Neil Gaiman talks about how the Chinese state has realised their error in discouraging science fiction:

‘I was in China in 2007, at the first party-approved science fiction and fantasy convention in Chinese history. And at one point I took a top official aside and asked him Why? SF had been disapproved of for a long time. What had changed?

It’s simple, he told me. The Chinese were brilliant at making things if other people brought them the plans. But they did not innovate and they did not invent. They did not imagine. So they sent a delegation to the US, to Apple, to Microsoft, to Google, and they asked the people there who were inventing the future about themselves. And they found that all of them had read science fiction when they were boys or girls.’

Gaiman argues that science fiction tells us that ‘the world doesn’t have to be like this. Things can be different.’ China obviously had a vested interest in preventing their population from thinking of worlds other, but they have come to realise that a culture that does not reach imaginatively is a culture at risk of stagnation.

So what is the issue? In the first instance, we have a media culture that favours violent action and a prompt return to the status quo as a solution to almost every problem. Social alternatives are left unexplored, or even mentioned. In the second we have have a culture that rejects thinking outside the box because the box is science and science is, by definition, quite authoritative. But science fiction limited by what is currently thought possible as opposed to what is conceivable (as was the case in the past) is a science fiction that limits our collective imagination. The knock on consequences may be incalculable, but they are very real. If we begin to let slide that pure, unbridled sense of wonder with the universe and the possibilities of our place in it, we risk building ourselves a trap built out of our own perceived limitations.

Case in point: Star Trek. When the original series aired in 1966 it was seen as little more than hokey fun (albeit hokey fun that was forward thinking enough to feature a Ruskie in the crew at a time when the Soviet Union was the West’s sworn enemy, and to give US television its first interracial kiss), but it genuinely went on to inspire the – ahem –  next generation of scientists. It also depicts faster than light travel, a science fiction trope generally sneered at by proponents of hard science fiction. But perhaps Star Trek’s creator Gene Roddenberry was right, and that if we set our mind to it we’re limited as a species only by our imagination: NASA no longer consider faster than light travel to be a concept to be laughed at, and scientists inspired by the show have been looking seriously into how such a technological leap can be achieved. Rod Roddenberry, Gene Roddenberry’s son, puts this down to his father’s belief that mankind can achieve anything (but then, he would).

In a 1929 interview with poet George Sylvester Viereck , Albert Einstein said ‘I’m enough of an artist to draw freely on my imagination, which I think is more important than knowledge. Knowledge is limited. Imagination encircles the world.’ It is imagination that is most at risk in this polarisation of science fiction, flanked on one side by social convention and financial considerations, and on the other by an unwillingness to consider seriously that which is currently scientifically impossible. Without imagination we are locked into the world as is, it getting superficially shinier, perhaps, sleeker, but essentially the same or even less substantial. Without imagination we don’t have the tools to think of ways to move past the worst, to move forward, and in the absence of that vision we’ll find ourselves repeatedly subjected to the simple and narrow visions of others, visions that look forward a lot less enthusiastically than they look back.

I’m not suggesting that we reject either camp, or that there aren’t a lot of fascinating stories being told right now. I’m merely pointing out a trend, and suggesting that we should take with a pinch of salt the current limitations of science, and of society, and perhaps be more willing to ignore them altogether if our stories, our imagination, and our future are better served by them being wrong.