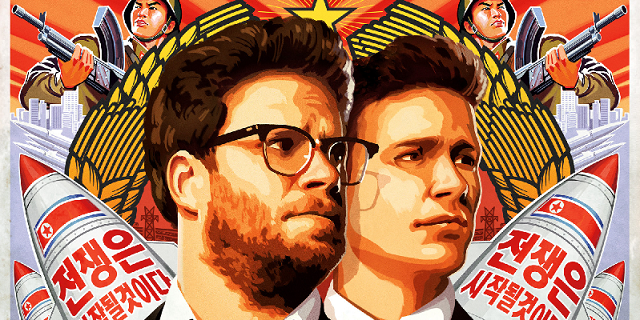 I had a dream.

The only problem was, it wasn’t a life-affirming Martin Luther King type of dream.

It was more a Sarah Connor at the start of Terminator 2: Judgement Day end-of-the-world kind of nightmare.
In it, the year was 2069. I was sitting on the couch with my great grandkids watching the 55th anniversary edition of The Interview (with commentary by Seth Franco, a human being made entirely from scratch using DNA from Seth Rogen and James Franco’s dandruff and owned solely by the Sony Corporation).

I started telling them the story of the on-again-off-again cinema release of The Interview. And the little bastards wouldn’t believe me. They had that look on their face like the time I tried to convince them Norbit was the most successful movie of all time.

Only this time, I wasn’t kidding.

The Interview – a movie with Seth Rogen and James Franco – nearly didn’t make it to cinemas in 2014 because people threatened to blow up the cinemas in which it was screening.

It wasn’t a joke, but the great grandkids wouldn’t believe me.

Instead, they started teasing me.

“Right grandpa… next you’re going to tell me that Pineapple Express was responsible for the war on drugs,” they scoffed.

My own great grandkids thought I was pulling their leg. Worse still, when they realised I was serious, they said I must have been part of the “worst period generation period ever period”. (Frankly, I deserved that. The previous night I’d shown them the pilot of The Newsroom).

I woke up in a cold sweat. Terrified by the prospect that future generations would think would think we were a joke, because we nearly reached some kind of terrorist armageddon over a Seth Rogen movie.

I mean, sure. I loved Superbad, Pineapple Express and even Funny People. But were they the sort of movies people should be dying over? Well, no… let’s face it. They’re not exactly important art. Good movies, yes. But not art.
If someone put a gun to my head and told me I could either take a bullet to the brain or never see Superbad again,

It was at that point I realised… we needed an excuse. We needed some kind of context to make sure that that whole distribution/screening fracas of The Interview didn’t make us look like a bunch of stupid, self-centred people who thought that screening a movie about two bumbling morons trying to assassinate Kim Jong-Un  was the ultimate expression of free speech.

We needed to make it look like The Interview was the logical progression and not just some random act of stupidity.
In short, we needed an alibi. And we needed it now.

So, to save humanity from itself, I’ve come up with some ways to rewrite history so that future generations don’t brand us as the dunces we really are.

If we work hard now, and stick to the story, me might just get through this.

Sure, the timelines don’t always match and the logic sounds a little fuzzy. But it’s the best we’ve got now, and time is of the essence. If we start modifying Wikipedia pages now, and changing a few history books, it won’t make the prospect of a terrorist threat resulting from The Interview seem like such a ludicrous idea.

Just stick to the script, bluff away any plot holes with a frustrated shrug about how ‘things were different back then’ and no one has to be any the wiser. And, more importantly, my great grandkids won’t make fun of me because of the whims of distribution companies and angry hackers in 2014.

The Interview is released in select cinemas and on demand Christmas Day 2014. Watch it so we may learn lessons for the benefit of future generations