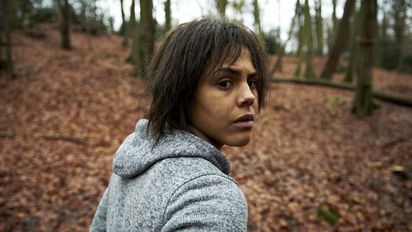 RECAP: Victoria (Lenora Crichlow) wakes up with no memory but nobody around her will help her. Instead she finds herself chased by masked people with rifles while the general public film it all with mobile phones. She encounters another of the hunted, Jem (Imani Jackman) who explains that a signal has turned most of the population into onlookers while those unaffected are divided into hunters and hunted. To get to the safe zone they have to knock out the transmitter at White Bear but not all is quite as it appears to be.

REVIEW: An intense and brutal tale, appearing to be one thing before twisting into something far more disturbing.

At first appearing to be a basic satire on reality television in the style of The Running Man this drama becomes far more thought provoking as it portrays a world where the punishment fits the crime in a world where our trial by media excesses reach their peak.

The direction suitably reflects the voyeruism of mobile recording with close up shaky cam both reflecting the unease and isolation facing Victoria in the early stages. There’s strong use of symbolism with the use of the tattoo of the once worshipped boyfriend and the memory of the white bear being used to torment our protagonist.

Structurally this episode plays with your sympathies and Lenora Crichlow’s performance is suitably shocked and intense as a victim of a world gone mad. The flashes of her past life only serve to make her seem like a normal person coping honestly with a disturbing world.

When the tables are turned and she is revealed to be a criminal trapped in a groundhog day of punisment, it’s difficult side with anyone and perhaps conclude that the whole of society is a brutal bastard.

If this is a morality play then the use of a killer as a protagonist might blur the issue somewhat. That fact is in many ways incidental. Writer Charlie Brooker has written about the commodification of individuals before and was particularly critical of those who appeared to take delight in the death of reality TV star Jade Goody and this strand of our culture in many ways is the target of the episode.

The episode is a comment on the fact that we have forgotten to respect human life and privacy in any terms. In so many ways the lives followed on reality television shows exist in a sphere away from human sympathies. These people exist to be commented on and derided, and their real lives shouldn’t interfere with our consumption. Even those unwilling participants whose tragedies force them into the public eye are fair game.

The world has become a big safari park and we all want to see the creatures, taking pictures on our phones and sharing it all with Twitter. The animals can be dangerous but it’s a safe environment.

This vehicle allows Brooker to explore this celebrity culture as well as tabloid coverage of crime, in particular those surrounding children. The use of the white bear as a symbol is both powerful and highly plausible. We live in a world of mawkish and manufactured grief and our newspapers can be shrines to that. A single image of a smiling child, a lost toy and we all can identify with someone else’s pain and make it our own.

The tabloid narrative is one of good and evil and any suspect is a pantomime villain whose past must be dug up before any real accusation is made. The evil happens but it’s how the rest of us react that perhaps makes everyone guilty.

This is uncompromising and sometimes difficult to watch but perhaps that just means it’s worth the extra effort.

Trailer for A Touch of Cloth 2

Charlie Brooker’s anthology series returns with an episode all about grief and technology.