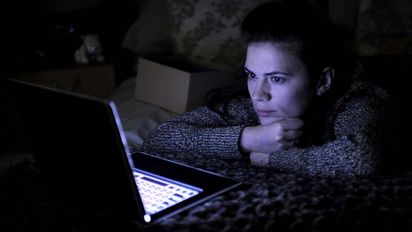 RECAP: When Martha loses the love of her life in an accident, her world is shattered. Her friend Sara signs her up to a service that can scan social media to create a virtual version of the dead. She resists but when she discovers she is pregnant, Martha activates the service but to share the news but how far will her desperation drive her?

REVIEW: Charlie Brooker’s anthology series returns with an episode all about grief and our relationship with social media. How much of ourselves do we really share with the world? Would it be enough to bring us back after we are gone?

Through grief it would only be natural to read over old tweets and Facebook messages to hold onto the only remaining part of the one you lost. In the world of Black Mirror, you can take this habit to its extreme conclusion.

The world building is superb. This near-future is plausibly realised with cars, laptops and phones all evolved from present designs in a rather convincing way.

Similarly a remote virtual version of a person doesn’t seem like such a distant possibility. Take Siri and add the right voice, a few background facts and choice phrases and you have a shallow version of the real thing. In this story the program absorbs every tweet, email, photo, video and interaction with friends. Technology allows you to recreate the version of someone that they presented to the world.

While Martha takes comfort from talking to her lover,  the the voice suggests the next level – a synthetic human with the virtual brain. It’s a dramatic leap and it’s a creepy notion but Atwell keeps everything believable. With this development, the episode enters proper horror movie territory. There are hints of Frankenstein and body horror like The Fly but Harris’s direction keeps things grounded in reality.

The atmosphere is dependent on the actors and Hayley Atwell and Domhnall Gleeson both give strong performances. Atwell holds the entire piece together and is always sympathetic even when her actions seem questionable.

Gleeson has the duel roles of both the real Ash and his sym and manages keeps his performances distinct yet familiar bringing a not-quite-human feel to the new model. But it’s his voice acting that perhaps stands out the most as the Siri-like version of the character feeds Martha’s grief and becomes a crutch while pushing her towards the next level.

This episode is a great example of pacing. Brooker knows how to use the four act structure to best effect and makes the advert breaks a positive creating full stops while keeping the audience intrigued like a master novella writer.

As the genre dictates, the ending has a satisfying twist as the episode fully explores the high concept and shows no matter how many echoes a person leaves behind, they can never be the same as the real thing. Ultimately all we are, is boxes of memories stored away in the attack.

Black Mirror airs on Monday nights at 10pm on Channel 4