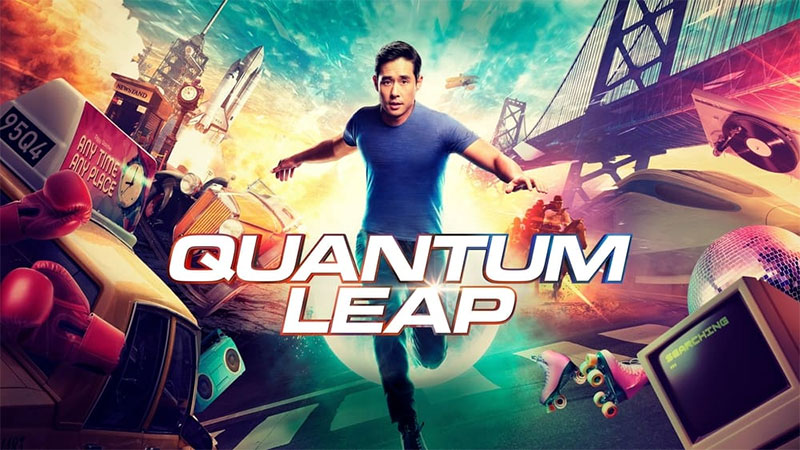 Quantum Leap 2022 begins much like the old show ended, with some expositional text on a screen. It’s a reminder of the basic premise and features a new version of the old opening narration from Deborah Pratt, but without the sumptuous music. And that probably sums up this version of the show. It’s that thing you remember before but without the heart.

That’s not to say that it’s bad, it’s all basically fine. It’s functional. It does a job. It was a perfectly pleasant way to pass a little bit of time. It just felt a bit rushed and flat, perhaps lacking heart.

Raymond Lee plays Doctor Ben Song, a physicist, linguist and nifty dancer, who ducks out of his engagement party early to step into the quantum leap accelerator. He finds himself in the past but with partial amnesia, living someone else’s life. Serving as his guide is Addison Augustine (Caitlin Bassett), his fiancée  who appears in the form of a hologram that only he can see and hear. Together they must change the past and put right what once went wrong so Ben can leap again as he tries to get back to his own time.

For his first leap Ben finds himself in 1985 on the day of Live Aid as a cop working undercover in a criminal gang who are planning to steal a diamond in a heist on the same day that they did a bank job… for some reason. His mission is to save the life of Ryan, a father who has lost his business and has turned to crime to help pay for his wife’s cancer treatment. He helps by punching a man, doing a dance and putting a bomb in a drain. Quite how it all works out doesn’t seem that clear but everyone seems happy enough. Place and time is evoked through TV footage and so much music of the era that no DVD release could ever afford but it never really feels like the past.

Back in the present day, there’s also a dull procedural ensemble drama about why Ben leaped and who helped him change the code of Ziggy to make it possible. The project is led by the reassuring presence of Ernie Hudson as Herbert ‘Magic’ Williams who Sam once leapt into one time on the original show. Alongside him are some other stock characters who look at screens and provide exposition, the most interesting of which is Mason Alexander Park as Ian Wright, who at least has the decency to be slightly charismatic and wear good clothes.

Whereas in the original show, Project Quantum Leap was all blue lights, lasers, coloured Perspex and a computer with a sexy voice buried in a mountain, this iteration looks like NCIS: LA or CTU from 24. Ziggy, the most advanced computer in the world, is a server room but without the interesting LEDs. Instead of doing any kind of cool sci-fi stuff, it shows scrolling code on screens and gets a syntax error. The production design is so flat that you wonder if its sharing sets with a CBS procedural.

The original Quantum Leap didn’t really spend much time in the present day (although actually it was a near future back then). It was a deliberate choice. Just as Sam was disorientated and not sure what was happening, as was the viewer. The story of his leaping was revealed slowly as were his memories. He wasn’t even told his own name. When Al tried to help him in the pilot, he was dragged out of the imaging chamber and we only saw it from Sam’s perspective, invisible forces acting on his friend. A story could be told without showing it. That was all vital to the format because you got to spend 50 minutes in the period of the leap, getting to know the characters and their lives, what fate might befall them and then giving them a happy ending through a dramatic turn of events.

In this pilot, there is zero drama. They could have done so much more. If it had started with Ben in a new situation and not knowing what was happening, then talking to Addison and not knowing who she is, it would be far more satisfying and heart-breaking when revealed that they’re in a relationship. And because we’re dealing with the present, we don’t get to know the characters in the past. Plot trumps the character drama.  Even when Ben leaps, that beautiful tease of the next week’s show gets interrupted by some office politics.

Speaking of which, we don’t get a Quantum Leap effect. He goes a bit blue and it cuts away. Isn’t that a bit weird? It’s almost as though producers are trying to hide the fact that it’s a science-fiction show and bring in general audiences. And that’s a valid thing to do but it feels like they’ve thrown away what made its inspiration work.

If you have one of the best theme tunes ever written, why wouldn’t you use it? If you have a nice logo, why use the dullest font in white on a black background as a title card? Remember the lovely sound design they used to have? The twinkle when Sam looked in a mirror, the imaging chamber door opening and Al stepping through, the beeps of the Ziggy handlink as Al hit it when it wasn’t working. And of course, there was the beautiful leap effect and sound. I used to make those noises in the playground. TV from past eras survives because they had strong visual and audio identities. Think of the Twilight Zone, Star Trek or even Knight Rider and you know how they sound, you know how they feel. Take all that stuff away and you’re left with a massive blob of nothing.

I thought when we reached the end that he’d leap and the show would make a big statement with the effect: now it’s Quantum Leap and they’d bring back an updated version of an icon and a sting of a familiar theme. But there was nothing And at this point I question whether anyone actually wanted to make this show.

Perhaps that’s not fair. It is a continuation. Sam and Al are mentioned and even seen in my favourite genre of image, publicity shots used as candid photos. But it does suffer from TV’s greatest curse: serialisation. Episodic TV is great and Quantum Leap is just the perfect format. You have familiar leading actors in unfamiliar settings and you can tell any story you want in any time period of the past 40 years. But in this version of the show, you’ll have nice little dramas interrupted by some conspiracy nonsense.

This reads negatively. It isn’t bad and it’s just a pilot. But it feels rushed and careless and I’m not sure it would massively make sense if you didn’t at least have some knowledge of the old show, which makes it even stranger  that they’ve binned all the nice things. Who is it for? The cast has promise but in Scott Bakula and Dean Stockwell, they’re going to be compared to some true greats of TV and so far, they’re a little flat. Still, perhaps it will find its feet. It would be a shame to waste the potential.

The leap Ben finds himself in the body of an astronaut, David Tamara, on the space shuttle Atlantis in 1998 in order to prevent his death on a spacewalk. Meanwhile in the present… The team