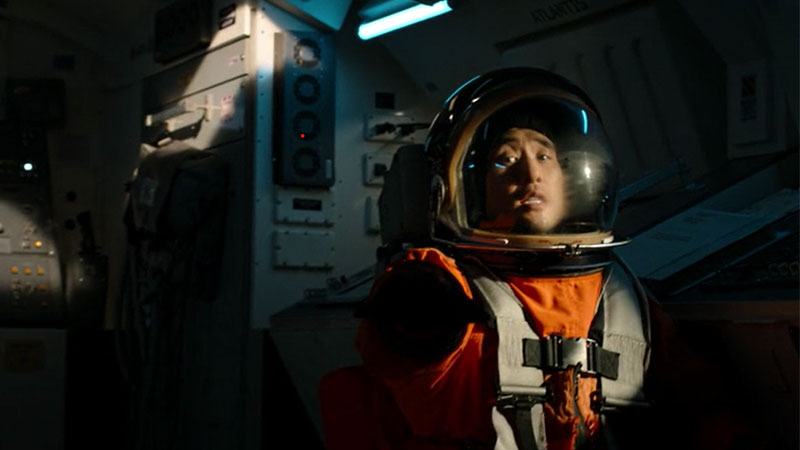 Ben finds himself in the body of an astronaut, David Tamara, on the space shuttle Atlantis in 1998 in order to prevent his death on a spacewalk.

Meanwhile in the present…

The team at Project Quantum Leap are feeling Ben’s absence and breaking into factions. Addison asks Ian to help her decode a thumb drive found in her apartment. Meanwhile, Magic and Jenn attempt to hunt down Janice Calavicci to find out how she’s involved in Ben’s unauthorised leap.

This second episode of the revived Quantum Leap is a little better than the first. Raymond Lee certainly gets to show off a bit more of his strengths as a leading man and what Ben can bring to the format. Rather than just following instructions from Addison, he takes control of a situation, engages with people and helps them make the right choices. Similarly, it’s an interesting angle seeing the team in the present day fall apart as Ben was the glue holding them all together. That does some decent character work and makes that side of things more meaningful. Additionally, the scenes between Ben and Addison work better because she shows her loyalty to him when Magic orders her not to help him remember his old life, because they don’t want him to know who he really is and become an evil leaper… or something

Setting the show on a space shuttle is a decent idea. It’s certainly created a fun cliffhanger last week and makes for a nice contained setting, much like a submarine, but it feels a little like no one considered zero gravity. They definitely did it better in The Big Bang Theory. It’s fine, mostly people are strapped to chairs. It’s a simple setting and there are stock characters to go with it with the grizzled veteran up for one last mission, the keen to impress rookie, and that other guy who sometimes has lines. Ben’s mission is fairly straightforward – prevent someone someone dying in an accident, then after that, stop a shuttle from exploding on re-entry (well, simple to explain at least). Perhaps it’s all not in the best taste given what happened to the shuttles, but I guess what makes the show work is contemplating how the world might have been better.

Sidenote: It’s been a long time since I’ve seen archive footage used in a TV show. It makes sense in this context, why do shuttle launch effects when you can buy stock? But it’s not like they’ve done much to visually to make it match. And actually, once they’re in space, the effects are decent enough for a TV show. They could have had far more fun with hologram Addison floating in weird spaces though.

The resolution feels more fantastical than grounded with leaps into the abyss and knocking on space station doors. Although perhaps that counts as realism after Gravity and The Martian.

Meanwhile, the distracting presant-day plot takes Magic and Jenn on a hunt to find Janis. They visit Beth (I KNOW) to ask if she knows where her daughter might be. While she doesn’t give them any information, they track down Janice by monitoring her calls. They go and visit her house and find a secret basement with loads of servers in it. There must have been a great deal on server props. Wouldn’t it have been more fun if her basement computer looked like Ziggy from the old show?  Georgina Reilly is only in one brief scene and is pretty arch but actually seems to have a little Dean Stockwell charisma which the show desperately needs.

This plot takes up a lot of time. It’s moving along but it feels like a way to make the show cheaper – standing sets and returning actors. It would be nice if they let the A-plot stand alone and these cutaways were much shorter. It doesn’t feel fair on the guest stars. And it’s really unforgivable that they break up the leap from one time period to the next with present day scenes. The show should be from the point of view of the lead.  It worked really well before and now it all feels really juddery. They do use a variation of the traditional leap effect and even the sound though, so that’s progress.

Ben leaps into boxing match at the end, mirroring the original Quantum Leap where Sam also got punched in the face in early season 1 episode ‘The Right Hand of God’.

Read our review of the pilot episode of Quantum Leap here.

The legend begins this Autumn on BBC One