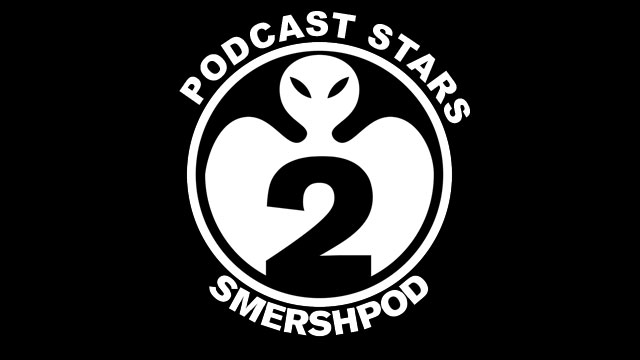 This time on Podcast Stars, we talk to writer and host of Smersh Pod John Rain, to find out what makes this hugely successful James Bond/Michael Caine-themed podcast tick.

For anyone who doesn’t know, what is Smersh Pod all about?

Smersh Pod is a podcast where I am joined by a guest to dissect a film in, possibly too much detail, and generally either marvel at how brilliant it is, or laugh at how rubbish it is.

What made you decide to start the podcast?

I am a huge James Bond fan, and am also a keen podcast listener. I really wanted there to be a podcast out there that felt the same way as me about Bond – appreciative, knowledgable, enthusiastic, while at the same time recognising that it’s all a bit wobbly and shit. I couldn’t find any that had what I wanted, or were seeing what I was seeing, so I decided to start one. I was a big fan of the RAM Album Club website, and loved their approach of having a different guest each session to bring a fresh perspective to it. I thought this would work very well with Bond, seeing as there are people out there who love it, hate it, or just aren’t arsed about it (this became the mantra of the first series). So I decided to do a podcast for each Bond film, with a different guest, and see how it would work.

What makes for a good guest host? Were you surprised how many people wanted to get involved?

I really like getting people I love on – whether that be friends, or people from the comedy/writing/history world. I really enjoy hearing different voices and perspectives, and sharing silly ideas with them.

Did you anticipate the show finding the audience that it has?

Not at all. There’s a tweet from me somewhere where I predicted no one would listen as it felt so very niche and personal when I started it. I’d done two podcasts before Smersh, with friends, and they hadn’t really taken off, for whatever reason, so I was incredibly surprised when Smersh took off the way it did. It’s been a very fun and surreal journey. I’ve met and recorded with some genuine personal heroes, so it’s been an absolute thrill to do.

Your show has a number of related side specials episodes. Was that something you planned on doing from the outset?

Not at all, no. Part of it was just a bit of panic about whizzing through all 24 in record time, and part was people asking to come on and talk about Bond related films. So pleased it worked out that way, though, as it was so much fun.

You ran out of Bond films, was it easy to decide to delve into the world of Michael Caine for season 2?

I wanted another series that had the longevity as Bond, but nothing really jumped out. I had considered doing Carry On, but the passion wasn’t there for me. Caine was suggested by a friend, and I instantly jumped on it. He’s essentially his own long-running franchise, and has possibly the most eclectic CV. It seemed like a great idea to go there next.

And while his filmography will some time to work through, any plans on what you’d do for a third season?

Yes. The third season will be all about 1980s Action Movies. Cannot wait. They (and horror movies) were my other passions growing up. There is serious gold in them there hills.

What one episode would you recommend to draw in new listeners?

It would have to be Taffin. Adam Buxton was so wonderful in every possible way. Really lovely man, and so effortlessly funny. He brought along all the clips we used in the show – he’d chopped them from the film himself and handed them to us. Other than that, I love the Moonraker with Al Murray (another wonderful man) as he’s as big a Bond nerd as me. I also loved doing North Sea Hijack with Mark Evans (he’ll be back in S2), Licence to Kill with Chris Hewitt (we got to talk for two hours about Timothy Dalton), the live Bullseye! show with David Reed and Paul Litchfield, and Love Actually (a Christmas special) with Julia Raeside. Essentially, I love every episode, and could literally sit here naming them all. Sorry.

Probably too long! I started off with a strict rule of keeping them to 40 minutes, but as it’s evolved, they’ve ended up being feature length, which I understand can put people off.

How often do you release episodes?

What other podcasts are you listening to at the moment?

I loved Brian and Roger so much. The The One Show Show with Jon Holmes is a weekly delight, Wrestle Me is joyous, We Hate Movies is always funny, I Am The Eggpod (a Beatles album review show) is warm and lovely, and Rule of Three is thought-provoking, educational and fun.

You’ve recently launched a Patreon. How will that support help the podcast?

People have been asking me for ages to do commentaries for all the Bond films and I really want to do it, however, in the real world I have a job and a family, and not a great deal of time or money. I am hoping to use Patreon to help me achieve more with Smersh Pod – whether it be more live shows near them, video content, or just extra exclusive podcasts on different film series’.

I live in Worthing, so heading to London (where we record) isn’t cheap, and this will help me take a day off of work every now and then and not lose out on ensuring my kids have shoes. People often ask for all sorts of films to be done via Smersh, and by supporting Patreon, I can make these requests happen.

If you would like to support the podcast – head to Patreon.

Where can people listen to Smersh Pod?

At Acast! I have a website, but I haven’t updated it since series 1 because I have been too busy.

Thank you very much John Rain.