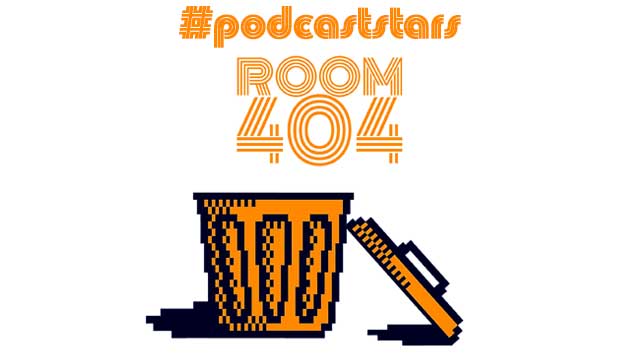 On this edition of Podcast Stars, we caught up with Iain Hepburn, host of Room 404, a podcast where pop culture goes to die. As the second series of this interview show launches, we wanted to find out what makes it tick.

It’s what might charitably be described as a homage to the original Radio 5 version of Room 101 – back before it was a panel game show, when it was just Nick Hancock inviting interesting folk to submit their pet hates.  Room 404 has a slightly more pop culture bent than the original, although the choices have tended to be just as conceptual as they are literal.  So far we’ve had everything from Dumbledore to bad puns in Grand Theft Auto.  The second series features a huge range of topics – although there’s quite a musical bent to a lot of the episodes.

How do you find your guests and what makes a good one?

Largely they’re people I know or have enjoyed their work elsewhere and wanted to work with them on something. I’ve tried to mix it up so there’s folk on there who aren’t regular podcasting voices, but who I know are funny and interesting.  The best guests tend to be folk who know what they want to say – experience on a mic isn’t necessarily a pre-requisite.  Audio’s also a lot more forgiving and less intimidating than a camera, so folk tend to relax a lot more doing a pod.

For R404, by and large I’ll let the guest make the argument why something shouldn’t go in, and work from that, but if it’s something I’m not familiar with, I’ll go away and dig into a bit.  For example, Tilt Araiza on his episode put up Kermit Schaefer – he’s credited as the inventor of the blooper, but I didn’t know much about him so I had to go and research him and his career a bit.

Relatively straightforward.  I like to tidy the episodes up for audio flubs and ums and aahs, but I like it to flow quite naturally – these are basically conversations, so it’s about striking a balance.  Then it’s just a case of adding clips to illustrate choices where necessary.

Partly because I’ve always preferred audio to video as a medium, and partly because I’d been producing podcasts and vodcasts professionally in my day job when they were still a nascent art form.  Eventually I figured why the hell not do my own.  Originally I worked with pal and former colleague Craig McGill to do a show called The Thumbcast, which was a kind of cult/pop culture review show.  We were one of the few doing anything like that in Scotland so it proved surprisingly popular.  A couple of years back I presented a show called From The Sublime…, which was a Screenwipe-esque format with a bunch of various contributors (including the editor of this august organ).

From the first series, I’d say Al Kennedy’s episode, although all four absolutely have their strengths.  From the new series… you’ll have to listen and see!

Around 45 minutes.  That seems to be the ideal podcast length these days.  I get a little irritated when I download a podcast and see it’s got a three hour running time.

This series will be weekly through July.  I was toying with a box set release and putting them all out together in one go, but the listeners voted in a poll they’d rather have a weekly release.   I like to do limited runs, in series, so we’ll see what happens with series three later this year…

God, where to start. I listen to so many, it’s largely replaced radio for me as a medium.

Obviously First Contact.  Al and Paul’s House To Astonish is probably the best comics podcast about. Jaffa Cakes for Proust and The Sitcom Club have an interesting take on British media and comedy that isn’t replicated elsewhere.  Love the Graps does the same for UK professional wrestling.  The Terrace and Set Piece Menu do what a lot of sports radio fails to, and could learn lessons from. Pod Save The World does some interesting deep dives into US foreign policy.  Fortunately is something that frankly should be a headline radio show for Radio 4.  Talk About the Passion’s sadly on the slates but hope springs eternal of a revival.

It’s on iTunes, Google Play, most podcast aggregators, or online at room404.podiant.co.