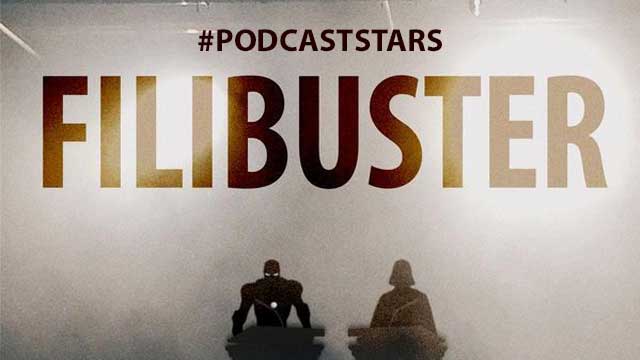 Filibuster can be whatever me and my co-host Dallas King want it to be which is quite exciting, we cover Film Festivals, interview a diverse range of creative talent, review films both independent, original and blockbuster, discuss a topic or theme and do High Fidelity style top 5 lists.

I’d guested here and there on some football, Star Trek and film podcasts and I was approached by Matt Hansen to join him for a Deadpool episode on what would eventually become the Filibuster podcast. Tristan his usual co-host wasn’t able to see as many of the big films, so I got a regular gig coming on and we eventually started the Filibuster strand of The Nerd Party together.

You’re part of the The Nerd Party network. Does it help to be a member of a podcasting family?

It certainly helps as we all do our best to promote each other’s shows on our podcasts and share the episodes. We’ve mentioned it a few times on Filibuster before, but we have a slack chat with all the hosts of the nine shows in it and the conversation can be very spirited about so many different things, so it can inspire a topic for an episode of Filibuster we want to dive in further too.

We’ve also got some experienced podcasters like Tristan, Mike, John and Matt and over the past 2 years I’ve had many a technical problem or needed advice then they’ve always been very generous and patient with me. I also learn so much from listening to them as podcasters and really inspires me to put the time and effort into what I’m releasing.

You’ve featured some pretty high-profile guests. Is it easy to persuade them people to come on?

A huge chunk of our guests over the years have come from film festival interviews, so the persuading isn’t something I need to do but is in the hands of the festival PR team. The PR team for the Edinburgh Film Festival, The DDA group are amazing people who can’t do enough for the attending media. You’ll get invited to interview or e-mail in who you’d love to interview, and they’ll do the negotiating or put you onto the schedule.

I’ve covered three film festivals, the fringe and book festivals here in Edinburgh and several conventions and I’ve found that these events are incredibly open to online blogs and podcasts applying to get accredited. The idea that these events are just strictly for the established names or traditional press is long gone. If you’re willing to put yourself forward and do the work, then you’ll be amazed at the opportunities to cover and interview people that will present themselves.

Outside of festivals, it’s been a mix of e-mailing, sliding into DMs or just quirk of fate for arranging an interview. I’ll give you some random examples, Robert Hewitt Wolfe regularly does a twitter Q&A and I asked him if he’d be interested in coming onto the podcast and he agreed and Ben Wheatley was touring ‘Free Fire’ round the UK and I fired off an e-mail to his PR team and never heard back for a month until the day of the screening in Edinburgh asking me to come down to his hotel. I once had Madeline Woolner like some of my photos on Instagram and noticed she had starred in ‘The Neon Demon’ and I was really keen to learn about working on that film and what Nicolas Winding Refn was like as a director, so I followed her back and messaged her. Social media has really made it exciting for being able to be two clicks away from reaching out to someone and being able to invite them onto a podcast

There’s a huge difference between the regular discussion episodes and interviews, do you have a preference?

I feel less stressed about doing a regular discussion episode than I do stepping into a hotel suite or onto a Skype call for an interview. I’ve done quite a lot of interviews and I always feel nervous going in, I worry that they might think I’m a fraud, that the questions are crap or just that I’ll catch someone on a bad day. With the non-festival interviews when they’re not compelled to even be talking with you, you don’t want to feel like you’re wasting their time and burning the bridges for them doing this sort of outreach in the future with other podcasts or websites.

I love talking with my co-host Dallas each week about film, he was someone I actually originally wanted to bring on for an interview as he’d released a book highlighting film locations in New York and he’s such a great writer and person. After Matt Hansen left early doors into Filibuster to go study law, Filibuster had just been me hosting or calling upon another Nerd Party host, podcaster or guest to join me. Having Dallas join the team full time has been fantastic and like me, he’s always at the cinema watching a diverse range of film and his knowledge and passion means we’ve always got something to talk about, opinions to share or debate to be had.

You dedicate a lot of time podcasting. Obviously it’s rewarding in its own way but often not financially. Is it challenging to keep motivated?

Not really. I do find the editing and published process quite a boring part of the job but doesn’t everyone? I just love being able to spend an hour a week with Dallas talking film and releasing something I feel proud of.

I think the diversity of Filibuster keeps me motivated because it can be something different each week. I previously was a regular on a weekly Star Trek: The Next Generation podcast and I found that challenging after a while because it felt somewhat restrictive and I was always looking to come at it in a different or unique way to make it stand out. I’ve never had that frustration with Filibuster and 135 episodes in, I hope it never does.

The only challenge I find sometimes is the lack of audience interaction with certain interviews or episodes as you can feel like you’re releasing something you’re proud of into a blackhole. You see that you’ve got decent download numbers and listens for the episode but no comments. I’m guilty of it personally that I listen to so many podcasts but I’ve rarely if ever tweeted the hosts my thoughts on the episode or a word of encouragement, let alone left an iTunes review.

It used to be a real grind in the early days and there was a lot of frustrated questions to Tristan about the software, I bet I tested his patience more than a few times!

Experience, mistakes and frustration have all helped make it a pretty quick process these days. Me and Dallas live in opposite ends of the country, so we record via Skype but record our own audio tracks locally. During the editing process I sync up the two audio tracks and go through the conversation and cut, polish and tweak as I go. I try and do it there and then on the evening or the day after and usually put the football on in the background as I plug in my earphones. It usually takes around an hour to go through everything for an average episode. I’ve found editing yourself really highlights where you need to improve and bad habits, it can be tough to do it but it’s a great way to help you improve as podcaster.

My first ever interview with Andrew Perez who starred in Louis Theroux’s My Scientology Movie. If you’ve seen the documentary, it dives into the world of Scientology and due to its elusive and secretive practices, very little is known about life behind the scenes. Theroux and the team with the help of an ex-Scientologist recreate using actors, what life was life and many of the harrowing experiences that they’d experienced. Andrew was cast to play the head of Scientology, David Miscavige. It was such a fascinating audition process to watch and it looked like such a unique role to take on, so I remember sitting in the cinema watching the film thinking I need to find this amazing actor and learn what it was like to be involved in this project and working with a legend like Louis Theroux. I found him on Twitter and reached out and never heard back and then I thought a few weeks later I’d try again, and he responded enthusiastically and I booked my first interview for he show.

I think this episode highlights one of the best parts of Filibuster, the diversity of the show and an interview with someone with a fascinating story to tell that you might not have heard of.

Usually just short of an hour, I think that’s the sweet spot personally. I know what it’s like myself as a podcast listener and anything over an hour can be hard to find the time to listen to and people have so many podcast subscriptions, that you don’t want to force them to choose between your show and others.

Every Wednesday but we do have extra episodes through the year during festivals or events. It’s been a crazy year for us on Filibuster and we’ve released 74 episodes to date during 2018.

I’m a huge American politics enthusiast, so I listen to All In With Chris Hayes, Hardball with Chris Matthews Five Thirty Eight Politics. Meet The Press with Chuck Todd, Slow Burn and Trump Inc.

I love The Adam Buxton Podcast and love his conversational style with guests and the Louis Theroux interviews are some of the best I’ve ever heard, they’ve become incredibly quotable among me and some of my friends.

The A24 podcasts are really interesting, they’re only five episodes in but I love that they pair people like Barry Jenkins with Greta Gerwig or Paul Schrader and Sofia Coppola and let them just talk for an hour about film, life and absolutely anything that comes up. They can be quite rough sometimes and could do with some editing to polish them up but it’s such a great way to listen to filmmakers in a very relaxed way.

Mike Schindler is probably my favourite podcaster and someone I feel I can relate to as a film fan and his shows Film Damage and Great Shot, Kid always demand my attention. Mike makes things seem so easy and the insight and deep pulls he has really challenge me as a podcaster to do better and one day get to his level.

You can listen at The Nerd Party website or on iTunes, Stitcher, Podbean, Spreaker, Blubrry, TuneIn, Radioplay or wherever you listen to your podcasts.

Thank you very much Lee!

In this edition of Podcast Stars, we talk to Iain Hepburn about his interview show, Room 404 where consign their pop culture pet hates to the vault.

This time on Podcast Stars, we talk to writer and podcaster Neil Perryman, all about his new talk show Perfect Night In.