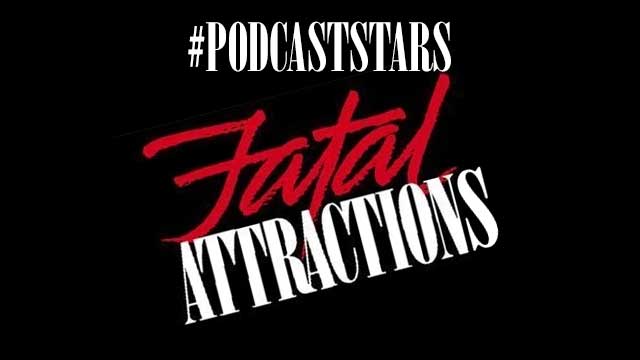 How was the Fatal Attractions team formed?

How do you go about picking a film?

Paul: Somewhere near the beginning, we made a list of films that we could use as a pool, from the really good, well-known titles to the straight-to-video garbage, from the 80s through to post-Millennium. Mostly, though, we just run on our own whims. It’s kind of interesting to see the films we all go for, seeing who opts for the mainstream and who goes for the fringe stuff. Feels like everyone has their own particular pull.

Amélie: The boys seem to be keener on the genre than I am, so I try to select a title that I remember being entertaining or that I’ve always wanted to check out, but I’ve inadvertently picked some big turds, mostly when I had a fonder memory of them from back in my adolescence and now realise as an adult that they are very poor (but I’ll still defend Sliver and Final Analysis compared with some other films that the boys rate much higher.

How much research typically goes into each episode?

Matthew: Mostly we just watch the film beforehand, and then read the IMDb, Wikipedia pages, any interesting articles etc. I kept a film notebook in the 1990s and so if the film was released between 1990 and 1998, I’ve usually got a few lines about it from when I saw it in the cinema as a teenager. I read them out at the end of the podcast if that’s the case.

Paul: Depends on what strikes me during the watching of the film. I try to actually go into the film knowing as little about it as possible, leave any research until afterwards, and then I’ll spend maybe an hour or so post-film digging into trivia or any critical pieces I find interesting. I like finding out about the cultural context of a film, what could potentially influence its shape (for example, the Amy Fisher stuff we talked about in our episodes on Poison Ivy and The Crush). They’re always good to chew on.

Leslie: I usually take notes. Read reviews if time permits. For some entries I’ve watched accompanying films, or I’ve had books or articles related to certain films. For example The Hot Spot had me looking the photography of Dennis Hopper. I read the excellent book ‘It Doesn’t Suck’ for Showgirls

What makes for a good discussion? Is the quality of the conversation inverse to that of the film?

Paul: I think, as is the case with films in general, how good the discussion is depends on how much the film gives you, almost regardless if it’s a good or bad one. I’m a big proponent of the idea that there is always something to talk about in any film, whether it’s form, subtext, production, legacy, anything like that. I think bad discussions come from a combination of the film giving very little and an inability of whoever’s talking to mine what is there, which I don’t think we’ve really had a problem with so far.

Amélie: I think the boys always endeavour to find something constructive to say about those films. However, as Paul mentioned, I find that the most difficult films to discuss are those which were very tedious and uneventful. There were plenty of the erotic thrillers we’ve watched that I found neither thrilling nor titillating, and whose storyline was as dull as soap water, and I really struggled to find anything interesting to say about them. Especially as I almost fell asleep in front of them and we record at 10pm at night, so the subject matter of certain films just send me straight to sleep. However, some films we’ve watched were so bad that they were hilarious like Boxing Helena, and I regard those ones extremely amusing to review.

Leslie: For me most of the films, good or bad, have something to discuss. Looking back at these films now often highlight progressive or retrograde politics or revealing attitudes to filmmakers or audiences. I find it so surprising that in the 90s the erotic thriller was the blockbuster. Some of these films made a lot of money and now the idea of such films have been placed under the rug. I enjoy mainstream movies today but the highly revealing that franchises have cast a huge shadow over so many types of film in terms of discourse. This includes more ‘adult’ themed movies.

Paul: Since we’re all scattered around enough to make a group recording impractical, we do every episode through Skype, but we each record our own audio track. Then Matt, Amelie and Leslie all send me their audio and I spend the next few days editing it all together. It’s mostly a matter of taking out our own particular verbal tics, like the uh’s, the um’s, or any long pauses. Beyond that I try to be mindful of flow and pace, and make sure we don’t wander off into any strange conversational cul-de-sacs. Unless they’re really funny. Funny stuff can stay in.

Matthew: It was something I’d wanted to do for a while and this seemed like the perfect subject for it. Basically a case of right people, right topic, right time.

Paul: Yeah, it’s always something that’s been in my head to some degree. I really enjoy podcasts, and they’re a good outlet for the need most of us have to wax lyrical or diabolical about the things we love. If nothing else, it’s a good excuse to just chat with friends about the film we’ve just watched. I’d probably do more if the necessity of a day job didn’t exist.

Amélie: After our Twitter conversation, the boys have enlisted me to start the podcast. I was worried that my oral English wouldn’t be at the same level as the guys’ and that alongside three professional or amateur film critics who have had film review blogs and proper articles published, my views would pale in comparison, but I reckon that nowadays, we all have constructive comments to say about the films and that all our opinions are valid. I think the podcast has actually helped my self-esteem.

Leslie: I had been podcasting for years before this and it was a chance to get my teeth stuck into something a little more niche. I found podcasting to be the perfect way to highlight my passion for films.

Paul: I think the most fun ones have been The Crush and Showgirls, while the most interesting points to discuss have come up in Bitter Moon and Eyes Wide Shut. And I really like our Fear episode, too. So, there you go, five episode recommendations… that’s what you asked for, right?

Leslie: I’d say Showgirls, Wild Things or Cruel Intentions. We enjoyed the movies and the films were rich enough for everyone to cast some interesting opinion on what we watch.

How important is input from listeners through social media?

Matthew: We have a handful of listeners who regularly respond to the latest episode on social media and that’s always really lovely. We love hearing recommendations and people sharing their own love of the genre. We’re pretty much only on Twitter though – we should probably set up a Facebook page at some point.

Paul: I always enjoy seeing how other people feel about the films we discuss, finding out what their memories are, or hearing how they’ve discovered something new through us. If people develop a new appreciation for Kurt Russell or find out about a new genre and they’re excited to talk about that, that’s great to hear.

Leslie: Really important. It tells us that we’re not shouting into the abyss! But we have a great handful of listeners who comment and share things with us. They’re very engaged with the podcast and it makes me smile when we get messages.

Amélie: If we hadn’t got any feedback from our followers on Twitter, I wouldn’t have realised that actual people other than our friends have listened to the podcast. It’s always heartwarming to find out that we do have some subscribers and regular listeners, who show us how engaged they are regarding our discussions, and are willing to take part in our debates. I love reading their comments and their views on the different films and issues brought up during the episodes. They really encourage me to carry on recording and share my opinion out there.

Matthew: Typically somewhere around 45 minutes. I think our shortest is something like 35 minutes and our longest (Showgirls) is 63 minutes.

Paul: As long as it has to be!……. Okay, it depends on the film, but I guess the average length is about 45-50 minutes. Some go longer, some are shorter, hopefully never outstaying their welcome.

Matthew: We were really clever in the beginning and recorded around six episodes back to back before we even released the first one. With that backlog we managed to release them weekly for a good few months or so. We currently aim for roughly every two or three weeks and that seems to work just fine.

Paul: Every two or three weeks is a good balance of staying fairly regular and having time off in between. We’ve all got commitments to other things, so it’s good to keep it relatively easy going.

What are some of the podcasts that you like to listen to?

Paul: For film chat, I love Filmspotting and The Next Picture Show . Currently got a backlog of You Must Remember This to work through. Also occasionally dip into The Bechdel Cast and Soundtracking with Edith Bowman. For non-film related stuff, Maron’s WTF is great, and I’ve been listening to This American Life for many years now.

Amélie: Apart from the Empire Podcast and the Sudden Double Deep podcast who’s recorded by our friends Daryl, Jeanette and Ben and which I find particularly instructing and entertaining, I don’t really take the time to listen to podcasts. From time to time, I dip in and out of self-help/lifestyle podcasts like Natalie Lue’s Baggage Reclaim and Nobody Panic,  or beauty podcasts like Full Coverage.

Leslie: The Daily Zeitgeist, Dana Gould Hour, My Favourite Murder and The Football Ramble are mainstays. Filmwise I subscribe to so many, but Sudden Double Deep and 80s All Over are recommendations.

We’re currently on LibSyn, iTunes and Overcast and probably some others. We’re on Spotify now too, as of a couple of days ago.

In this edition of Podcast Stars, we talk to Iain Hepburn about his interview show, Room 404 where consign their pop culture pet hates to the vault.