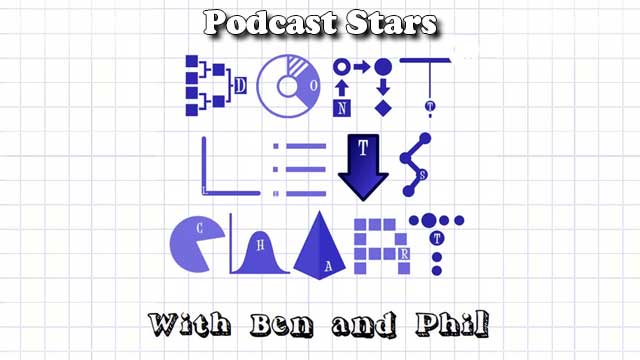 This time on Podcast Stars, we caught up with our favourite quiz book writer about his new podcast. That’s right, Ben Baker is here to reveal all about Don’t Lets Chart.

So what’s the format of Don’t Lets Chart?

Don’t Lets Chart is two men in their late thirties who are terrified and bewildered by the world around them and can only make sense of it via the soothing structure of charts, top ten lists and nicely organised factual gumph. The show you hear is that info squeezed through our brains and out of our mouths like one of those Play Doh spaghetti maker kits.

How did you meet your podcasting partner Phillip?

As I’m sure he’d prefer to forget, he emailed me back in 2002 when I was making a download radio show (the term podcast had yet to be a thing) called “Ben Baker’s Sexual Corridor”. It was very low quality, both in material and bit-rate, but Phil had enjoyed it and offered some sketches for the second series. The best was “Pop Where Are They Now – Brian May” who was still stuck on the top of Buckingham Palace after the Queen’s Jubilee which probably hasnt dated very well. I don’t think we met in person for a few more years but he’s been part of my hare-brained and loose-trousered schemes ever since and he plays a good foil to my more idiotic outbursts.

What is it about lists that makes for a good discussion?

They’re the springboard for your own opinions and the reason for about 95% of talk radio but more importantly, they give us a slip and point us in the general direction of a conversation when the options are limitless. Plus nobody agrees on anything ever.

What made you want to start a podcast?

I’ve always loved radio but I couldn’t imagine myself working in it as the limitations these days are just so relentless, be it commercial ventures that play the same 200 songs on a loop or the BBC that seems to be terrified of taking any real risk in the post “Russell Brand Says Pubes To Spanish Waiter” climate. Podcasts might not pay the same but the level of control is essential and being able to do something not only true to yourself but that other people might actually enjoy too is hard to parallel. Although if I could play an instrument, I’d probably do that instead because girls.

What one episode would you recommend to draw in new listeners?

We’ve just the handful up at the moment but I’m particularly proud of episode four (“Little Jenny Knives For Eyes”) which has murderous toys, superhero slaughter and the Richard Nixon quiz which reduced Phil to tears and spluttering sounds, something I’ve never done before.

Not as easy as it would be if we were both sat in the same room as opposed to 100 miles away recording our own sides which I stick together. Phil was suffering with echo in his new home recently so took to hiding with a mic under the duvet which I can’t imagine will be much fun when summer comes round. Overall I’d say each episode takes a working day.

Generally around 35-40 minutes long. I’ve a thing for shows being snappy and commute-length, plus there are millions of “two middle aged white blokes talking” shows out there, I’d like ours to actually be memorable. Or, at the very least, less smelling of Lynx Africa.

How often do you release episodes?

Every Monday. We’re making a conscious effort to keep the release schedule regular so people can get into the habit of listening and we’ve got something to work towards. Also: Mondays are rubbish and who doesn’t need a kick in the smiles first thing in the week?

What other podcasts are you listening to at the moment?

On the more well-known scale I’m a huge fan of Athletico Mince, Smersh Pod, Kermode and Mayo’s Film Review, Conan O’Brien Needs A Friend, The Weekly Planet and CheapShow but I’ve equal love for my friend Tim Worthington’s interview programme Looks Unfamiliar, Betamax Film Club, David Lloyd’s Radio Moments, We Buy Records and Retrospecticus which is a mixture of The Simpsons and modern history that I’ve seen few places else. In fact we got them to do us a hams-inspired special cameo in episode five.

Where can people listen to Don’t Lets Chart?

They can visit benbakerbooks.org or subscribe in a myriad of ways for a million different podcasts apps with this RSS feed.

And thanks for having me. Who knew talking about yourself was so much fun? Don’t answer that….

Thank you very much for joining us!