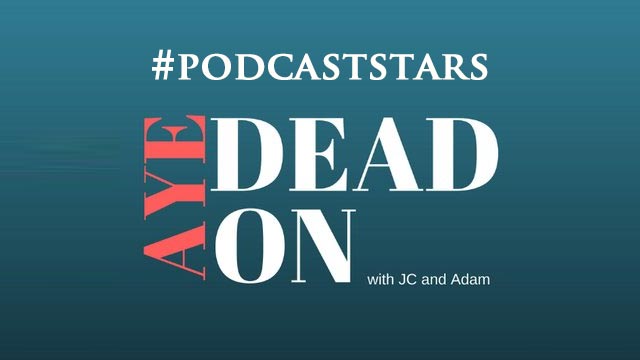 This time on Podcast Stars, we caught up with Jonathan Cardwell about Aye, Dead On, a Northern Irish podcast that talks at great length about nothing in particular.

Two mates sitting in a living room, drinking tea and talking nonsense. Original, right? Our blurb says that we talk at great length about nothing in particular, which sums it up best. We started off with broad topics but we found it limited us in how many bizarre tangents we could go so off on so while we still occasionally do those we added in various more focused pop culture hypotheticals (What Would You Do If…?) as well as a Choose Your Own Adventure type series.

Almost literally zero. Most of the time I try to think of a fun topic and I show up at Adam’s house and just drop the topic on him as we hit record. I normally have a few notes written down because I am terrible at coming up with stuff on the spot whereas Adam is pretty good at waffling on with little to no preparation. We’ve had a few episodes where there’s been a bit more research but by and large we’re mostly winging it. You don’t get to hear the abandoned episodes where we just hit a brick wall ten minutes in and can’t think of anything to say.

How important is input from listeners through social media?

I’m surprised anyone listens so when I get a like or a share I’m always very appreciative. My favourite response has been from someone who used to live in Northern Ireland saying that our dumb podcast has ‘kept her in touch with her roots, even when [she] doesn’t have a baldy notion what yis are on about’ which was a lovely thing to hear. We’ve had some artwork sent to us from listeners as well. I don’t think we’re at the selling t-shirts stage quite yet.

I’m a terrible social media person though. I don’t know how to promote or gain followers the way others do. We have a decent-ish following who contribute ideas and suggestions and it’s always fun to get other perspectives on the dumb things that we talk about.

Nowadays it doesn’t take too long which is nice. In the beginning I was taking out all the um’s and ah’s as well as the half-second gaps between sentences and it became exhausting. I think both of us have gotten more comfortable during the actual recording that the amount of dead air is minimal these days. People don’t even really notice those things though, but in the edit that’s the only thing you notice.

The clichéd answer here is that we’re just recording conversations we’d be having anyway, which isn’t true for us. We’ve been friends for a long time but I highly doubt some of the things we’ve recorded would ever have come up naturally in conversation, but I knew we could be funny together and that I could handle the technical side of things pretty easily, so we figured we may as well give it a go. At the very least it’d be a fun experiment, and happily people started listening so we kept going. There aren’t too many Northern Irish podcasts either so we thought we could fill a gap in the market, so to speak.

I’d love for people to check out the entire back catalogue but even I don’t like to listen to some of the older ones, with my even worse editing and much lower production values. Our most recent episode (What Would You Do If You Were Groundhog Day’d?) is actually one of my favourites so I’d say that one. Adam’s Dungeons and Dragons episodes we’ve done are among my favourite to record so hopefully they’re as funny to listen to as they are to be a part of.

We don’t have a set length but they usually last around 30-45 minutes depending on how long we can waffle for.

Due to Real Life getting in the way sometimes there’s often quite a big gap between episodes, but occasionally we stick to a weekly schedule. Sporadic would probably be the best description of our release pattern, but if there is an episode it’ll come out on a Monday.

What are some of the podcasts that you like listening to?

It’s on all the major platforms, iTunes, Acast, Stitcher and just recently I believe we’ve been added onto Google Podcasts.