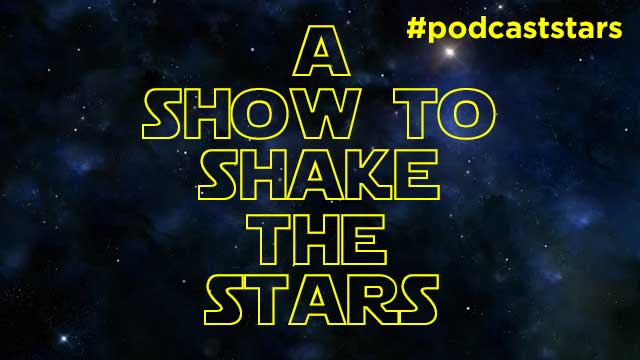 In our new regular feature, we talk to some of the voices behind some excellent podcasts that we think are worth your ear time. This week, we talk to Steve Clark, host of A Show to Shake the Stars – a Star Wars podcast which launched in December 2017.

It’s a show that reviews each episode of the Star Wars National Public Radio dramas. As there are only 29 episodes in the series this does give my show a limited life, but I wanted to do something different to all of the other thousands of Star Wars podcasts out there. Granted, the SW Radio Dramas are a niche area of fandom, but that was all the more reason do it! I wanted to look at a different aspect of Star Wars that I feel doesn’t get enough coverage or love.

What inspired you to start podcasting?
Okay, this may seem like a sycophantic answer, but it was The Spoilist and their Star Trek TNG Introcast (clearly it shows that anyone can make a podcast – ed). I’ve listened to the show since the start and find it funny, well informed and as a huge ST TNG Fan I love the fact it reviews the episodes but does it with a sense of fun. Also, there is another podcast called Do You Expect us to Talk, which started off with reviewing the James Bond movies, before moving onto other franchises. One of the hosts of the show gave me encouragement and advice when I was thinking of starting my own podcast.

That’s a tough question. The first episode is a good place to start as it gives a brief history of the Radio Dramas but as that’s the first podcast I’ve ever done I feel it’s a bit wobbly in terms of quality. I would recommend that you start from the beginning and work your way through the story in order. However, as you probably already know the story of Star Wars well, I would recommend that you listen to either ‘Death Star’s Transit’ or ‘The Jedi Nexus’. I feel proud of those two episodes, they are my favourites so far.

It depends on how much I have to say at the time I guess! They usually vary between 30-50 minutes.

I aim to release a new episode every 2 weeks. I usually stick to that schedule but sometimes it may be a bit longer in between episodes.

I like to think I listen to a wide variety of shows, some don’t really need plugging (hello to Jason Issacs) but here’s a few of my other favourites:

Do You Expect Us To Talk? – a movie based podcast
First Contact – you know all about that
The West Wing Weekly – a show that reviews each episode of The West Wing
Fantha Tracks – a new Star Wars podcast
Mueller, She Wrote – a political podcast

Thanks Steve! Don’t forget to subscribe and leave A Show to Shake the Stars a review.