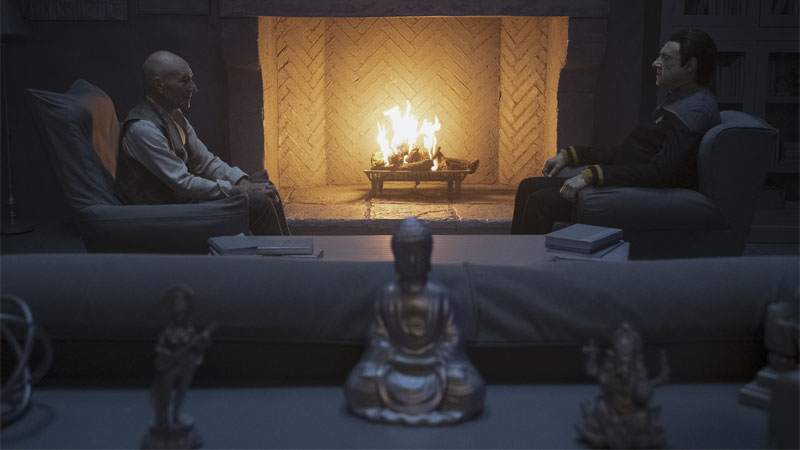 Narek escapes the android compound to the Borg cube and tracks down Narissa who is trying to bring the Borg weapon systems back online. Don’t worry about that though, there is no reason for this to be there. Seven kills her not long after so that she can learn killing is wrong. Narek takes some grenades and goes to La Sirena where Raffi and Rios are fixing their ship using a magic stick. They decide to work together to take down the synths who are building a beacon to contact the ancient synth civilisation. Obviously, their plan fails too so it’s down to Picard ,who has been broken out by Jurati, to stop the beacon and take on a 200-strong fleet of Romulans. They use the magic stick, actually a fundamental field replicator with a neural-catomic interface, to perform an elaborate version of the Picard maneuver with multiple La Sirenas appearing at once. This buys them enough time for Starfleet to arrive with a fleet of ships commanded by Captain Riker to allow Picard to deliver his big speech to Soji about the importance of life and sacrifice. He convinces her but it’s too late for him and he dies of unnamed brain disease. Then we get a weird coda to Star Trek Nemesis where Picard says goodbye to Data, who has been living in a hard drive for the last 14 years. Picard’s consciousness is then downloaded into a new body and everything is fine, let’s never speak of this again, and the crew of La Sirena set off on a new adventure. Don’t you wish we could have reached this point after two episodes?

Listen to the previous episode here.