Guest blogger Girl on the Net shares her thoughts on new FOX sitcom The Last Man on Earth, starring Will Forte as Phil Miller… 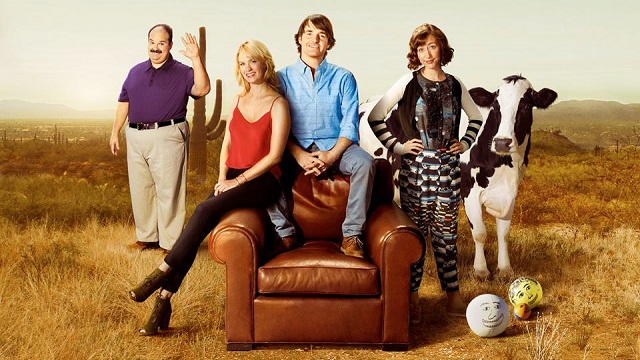 Awesome comedy is often built on loveable characters who fuck shit up. While they screw up, you watch through gritted teeth – half laughing, half willing them to succeed. You can’t watch Basil Fawlty bashing angrily at a car with a tree branch without feeling a teeny bit sorry for him. To a certain extent, we need that car to start as much as he does, which is why it’s really bloody funny when it doesn’t.

So onto Phil Miller, the ‘last man on Earth.’ He’s not really the last, by the way, because there’s another dude there, as well as two women, so it’s actually more like the last suburban book club on Earth, but let’s gloss over that.

Phil Miller is a complex dude – we’re invited to simultaneously love him and also believe he’s an out-and-out prick. You’d think that, like the antics of previous loveable pricks (Richie and Eddie in Bottom, for instance), this would make for an awesome comedy show, but it doesn’t. It makes for good jokes sometimes, occasional hilarious mix-ups and mishaps, but it never quite makes great comedy. Why? 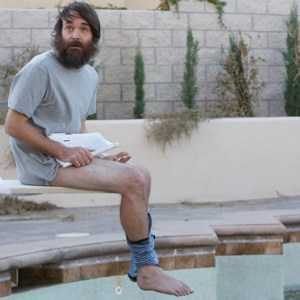 Phil Miller was on his own for a while, and when he was alone he was pretty brilliant. Given limitless options and a whole world to play in, he did things I’m jealous I didn’t think of first: aquarium bowling; smashing cars to pieces; making himself the President; shitting in a swimming pool. Even the non-pool-shitters among you will find something to love about Phil Miller – he’s imaginative and cheeky and Oh God So Alone and that makes him infinitely loveable.

Then things start to go downhill. Phil Miller is joined by a lady who he marries reluctantly so that she’ll let him put his cock inside her. Then they are joined by another lady, who is blonde and less nerdy than the first. This is the point at which the comedy doofus Phil Miller turns from ‘nuanced and hilarious agent of his own downfall’ to ‘cardboard cut-out cunt.’

Shenanigans ensue because Phil Miller fancies the new lady. Scriptwriters revel in the chance to give us a few cheap laughs. Phil’s married the nerdy one! The shit one! Hahaha, what a horrible thing to happen to him now an objectively better one has turned up! Phil’s wife does loads of awful, boring things like caring about grammar and growing tomatoes and giving him wonky tokens of her heartfelt affection. New lady does hot stuff like… umm… standing around a bit and looking hot! Phwoar. 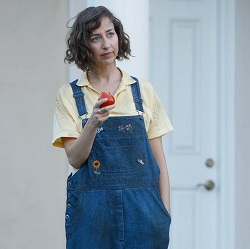 This isn’t a rant about the relative hotness of the ladies in the show – although for the record I think Kristen Schaal is a fucking fox and I would be all over her quicker than you could mispronounce ‘tomato.’ But it’s taken me a few episodes to realise just why I hate Phil Miller so much. It’s not that he’s a hapless human, or that he’s mean to his otherwise badass nerd-wife. It’s that we’re invited to believe that his fuck-up-causing flaw is something so totally outside his control that we should pity rather than mock him.

It’s like a weathervane swinging however the wind takes it. It’s a law unto itself. It’s a force of nature. Phil Miller isn’t a man with an achilles heel, he is a man with an achilles penis. In aforementioned comedy goldmine Bottom, Richard Richard had an achilles dick too. His desperate urge to get his end away leads him into all manner of hilarious scrapes. But the key difference between Richie and Phil Miller is that we’re never asked to absolve Richie of blame. To consider that his relentless drive to fuck is anything other than the obsessive desire of a fat, balding, sweaty old git.

When he’s alone, Phil Miller’s horniness is empathetic – it raises a wry smile in anyone who’s spent a lonely Saturday night trying to beat their own ‘how many wanks can I have in a row?’ record (seven, not that you asked). Then women show up and it all goes to shit, because we’re being invited to feel sorry for the guy as if his penis is just something that happened to him. His cock caused him to marry Carol so reluctantly that his childishness borders on cruel. It caused him to switch his allegiance when another, ‘hotter’ person shows up. And tee hee, it’s not Phil’s fault, it’s that little guy in his trousers causing mayhem and chaos wherever he goes.

“It’s supposed to be like that,” my other half tells me, as I wave a Monday-night cider in his face and Get All Shouty About TV. “Phil’s supposed to be a villain. We’re meant to hate him.” Which would be fine, if it were true, but it’s really fucking not. 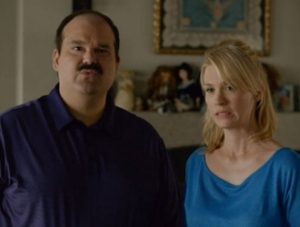 To top off our bar-room camaraderie with achilles-prick-Phil, when Todd shows up and – horror of horrors – is fat, we’re supposed to giggle even further at Phil’s misfortune. Throw back our heads and cackle at the bitter irony of the ‘hot’ woman ending up with the ‘fat’ one.

It’s at exactly that point that I got bored of The Last Man On Earth – despite being an awesome concept, and having some pretty nifty wordplay (most of it courtesy of foxy-nerd-badass Carol), most of the big jokes are based on lazy stereotypes. Quite cleverly articulated ones, but the same old bullshit nonetheless. We can probably love Phil in spite of him being a cunt, as we do with the guys in Bottom. Or we could laugh at Phil as the comedy villain. But asking us to condemn Phil’s hapless twattery while also joining his gang – pointing and laughing at the nerdy kids – makes for jarring and tedious comedy. A clever idea that lowered itself for cheap shots at fat blokes and lonely, horny men.

This isn’t ground-breaking comedy. It’s a programme that built up a hilarious rogue, raised him to the status of weapons-grade arsehole, then nudged and winked like we were all on his side.

If you enjoyed that, then you can read all of Girl on the Net’s thoughts on life and sex on her website

The X-Files returns to FOX in January 2016 for the first new episodes since 2002.