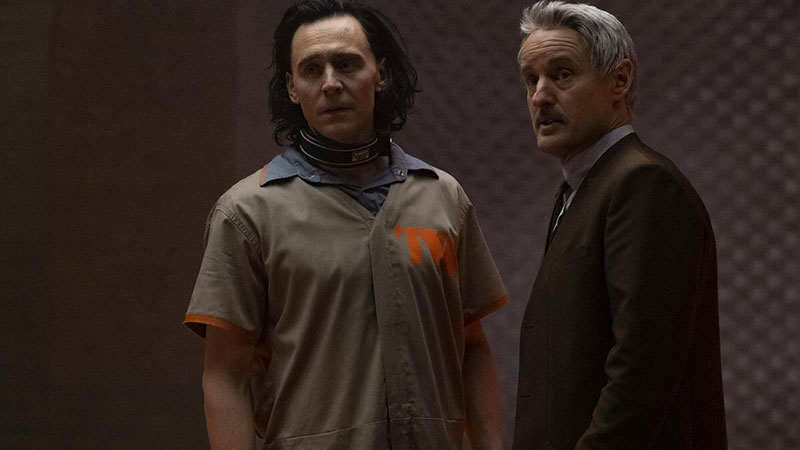 It’s a decent enough beginning, but it’s also a bit too much of a middle. Just like a broken timeline, it’s parts in the wrong order and some of it is missing. Perhaps this is a problem of the increasingly blurred lines between television and film, made all the worse by Marvel’s need to feed it’s ever-expanding franchise. Somehow it’s simultaneously not enough and too much, all at the same time.

Following the time-travelling shenanigans of the Avengers,  Loki (Tom Hiddleston)  – adopted brother of Thor and god of mischief  – is captured by the Time Variance Authority (referred to as the TVA and available on some great Disney merchandise). He’s a variant, someone who was taken an action which goes against the sacred timeline as dictated by the Time Keepers, three lizards who are protecting the universe from becoming a multiverse, which would supposedly result in a war across all dimensions and never-ending chaos. But instead of being executed, the avuncular Agent Mobius (Owen Wilson) convinces the powers the be to let him partner up with Loki so that he can help him hunt down another version of himself who is causing chaos on the timeline.

And that sounds like a great setup for a show. It’s one of those buddy cop shows where the loose-cannon consultant has to work with the real cop but together they form a partnership that shouldn’t work but it does and they get the job done and form an everlasting bond along the way. It could basically Castle or The Mentalist and every week Mobius and Loki could visit a different time period, put something right that once went wrong, all while working in the background over the season to track down Dark Loki and trying to solve the mystery of the TVA itself. That lovely procedural format is all ingrained within the ideas, that long-runner that gathers a loyal fanbase.

It could basically be the US version of Doctor Who, but a bit more procedural. And the show shares plenty of DNA with that British institution. It’s almost like an origin story of the Time Lords, where you see how their bureaucracy works. The third episode in particular bears a striking resemblance to David Tennant-era episode ‘Utopia’ with our heroes attempting to escape a doomed planet before the end comes. There’s absolutely some of Steven Moffat’s series 6 finale with all of time crashing together at once.

But of course, it isn’t that show. It’s a six-episode season on Disney+ so of course it doesn’t even try to be that show. Even if it wanted to be that show, casting movie stars like Hiddleston and Wilson means they’re not hanging around for nine months to do what might be less than prestige television. It’s just not financially or creatively viable. So instead what we get is the set up of a TV show, and then a plot which sort of takes them out of the TV show, into a kind of character drama about the nature of the self and then keeps going along until it becomes swallowed by the next big Marvel plot.

Read more from The Spoilist

Sure, there’s a tantalising glimpse of something that might have been but there’s no point in dwelling on that. But it is frustrating, because the show overturns its status quo almost every episode. The TVA is not what it appears to be… okay, but I only just got here. The Time Keepers are not really what they seem… right but I don’t know who they are yet. Status quos are upended and worlds destroyed before there’s time to invest. Friendships are apparently formed and betrayals made without any reason for us to care as an audience. The big bad isn’t actually evil but actually a wronged and motivated female version of Loki, who actually goes by Sylvie (Sophia Di Martino)  Although based on social media there were plenty of people apparently bored with the episode that actually did character work as Loki bonded with his female variant for an episode without pushing the plot forward.

But actually, for the most part, Loki  works. These are excellent characters to spend company with. The world is beautiful to look at, the technology and the bureaucracy of the TVA is a delight. And although it veers from place to place and setup to setup, it’s all tightly plotted. It (mostly) has a sense of pacing, it has a sense of tone and the world is well constructed.

But whether a movie or a TV show, you have to stick the landing. And this fails spectacularly. The final episode is someone sitting in a chair monologuing to our leading characters for a good part of the run time. Even if it’s an old convention, whether it’s the master in Doctor Who or a a Bond villain, it’s bad writing. You need to tell the story through the drama, not having someone explain it. It’s boring and it stopped the show being what it was about and left our two leading characters sitting in a chair looking at someone new who we also don’t care about saying all the things. Imagine an entire comic book with just the same three frames and different dialogue. And then it’s a new setup and a cliffhanger.

And this is not a problem with cliffhangers. Cliffhangers are great when done right. They’re part of what makes TV work. Think of ‘The Best of Both Worlds’, Star Trek: The Next Generation’s season 3 finale and one of TV’s finest hours. It ends with the ship’s officer Riker, firing on his Captain, who has been turned into a cybernetic villain by the Borg. It works because the episode was about Riker refusing to take the next step in his career, feeling left behind because he’s comfortable even though he has other offers and people want his job. In that moment, he is letting go of his past, saying goodbye to his mentor and finally taking the next step. It all hinges on character and theme.

Well, what are the themes of Loki? It’s about free will. It’s about choosing who you are and what you do. And even when there are a million versions of yourself, making the choices that matter for the people who you care about, even if the people you care about are yourself. The penultimate episode ends with Loki trapped at the end of time, facing a creature which consumes the universe, and he rallies his other selves, makes them better and takes a step forward for someone else, to leave time. That’s your cliffhanger, that’s your thematic ending. Instead we get something altogether more frustrating, less meaningful and dramatically inert. It’s like the opposite of Terminator 3’s ending.

Then there’s the promise of a season 2. Sure, I’ll play. But TV today feels like it’s being made by many who don’t fully embrace the format, or understand what’s required to pace it and make a season satisfying. So, it was good until it wasn’t. Maybe we’ll get it right on the next loop.

Loki is now streaming on Disney+.