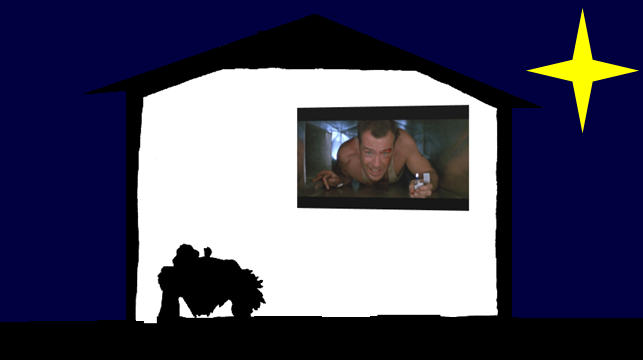 It’s beginning to look a lot like Christmas. The tinsel’s up in the stores, Santas are out en masse in our malls and film geeks all over the Internet are arguing about whether or not Die Hard is a Christmas movie.

Yep, it’s the yuletide argument that’s more snore-inducing than a truckload of tryptophan. Does Die Hard really count as a Christmas movie? (Never mind that it’s set at Christmas, includes a Christmas party and features a dead terrorist wearing a Santa hat).

Rather than add another voice to an already-crowded debate that no-one really cares about, we decided to go straight to the source and ask the one guy who can definitively say whether a movie’s a Christmas movie or not – the Baby Jesus.

So, for this festive season, we’re proud to present the Baby Jesus’ views on some of the more well-known Christmas movies.

For the record, that “angel gets their wings” thing is a crock… But it still gets me every damned time. Waterworks like Niagra Falls.

Poor Macauley. At least when my Dad abandoned me, I was in my thirties.

Tis the season…. TO KICK SOME ASS!!! Willis FTW!

On Earth, you may worship my Dad. Up here, we worship Bill Murray.

In Hell, this plays on an endless loop with Jingle All The Way.

There’s another special circle in Hell for anyone associated with this movie. Even the Gaffer.

I would say there’s another special circle in hell for this mob, but people involved in this film had to work with Reese Witherspoon. That’s way worse.

Ever want to learn the true meaning of Christmas? Look no further. It’s Dennis Leary, Judy Davis and Kevin Spacey.

Jingle All The Way

I like this one, but Dad’s not a fan. Something about giving too much credence to make believe characters.

If this guy’s the face of modern Christianity, I’m converting. Seriously.
We spoke to the Baby Jesus as he was promoting The Holiday Season

It really is a miracle

Merry Christmas! It really is a wonderful life