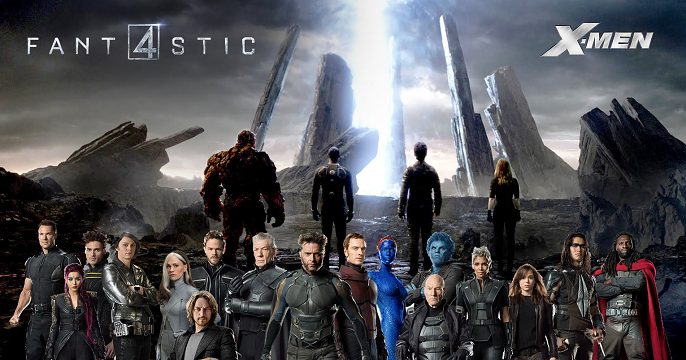 Would it be a good idea to put The X-Men and Fantastic Four in the same movie? Financially, sure it would but creatively, not so much. It’s a project that’s been rumoured for a while now and since 20th Century Fox, who owns both properties has the X-Men franchise back on track and a refreshed version of  Fantastic Four up and running, it would make sense to combine these two franchises to create one super-powered Avengers-style hit. That should be fine in theory but while the idea of a crossover might be cool, there are plenty of creative problems to overcome.

Shall we begin? Well where better to start than with The Avengers and how its director felt hamstrung by the characters he couldn’t use, with Marvel having sold the rights in the 1990s. During the promotion of Avengers: Age of Ultron, Joss Whedon  complained that FOX has the rights to all the best female characters, and with Jean Grey, Kitty Pride and Rogue on their books, it’s hard to argue with that. That’s not because Fox have hand-picked all the great super-powered women, it’s mostly by virtue of just how many characters exist within the world of the X-Men. When Marvel sold the rights, they were’t just selling characters, but rather a whole universe.

It’s a blessing in some ways that the X-Men are not part of the Marvel Cinematic Universe because it helped keep the whole world grounded and identifiable. At the start of Jon Favreau’s Iron Man, the world exists more or less as recognisable as that of the audience. Tony Stark developing the Iron Man armour is seen as a freak event to the masses and although there’s the implication of a bigger world through the presence of SHIELD, it isn’t normal to have people flying around in robot suits and hittng each other.  The next hero to be introduced is the Hulk, the result of a science experiment gone wrong. Once again, it’s grounded in this same almost plausible world. Captain America takes the universe back in time but is built on a similar scenario. From this foundation, the world has been built and expanded upon and now Gods and space monsters feel entirely plausible. It was a patient build and one that is fully exploiting the expanded potential, even if that comes with it’s own limits.

The world of the X-Men movies is different. It’s a full of people with naturally occurring mutations which result in an almost unlimited supply of superheroes.  The original run of these films began in 1994 were set at some undefined point in the near future where mutants were just emerging, once again keeping it grounded for the audience, but through prequels and sequels we’ve seen mutants involved in major historical events from the Cuban Missile Crisis to the assassination of JFK. It’s a world with an alternate history, and it fits consistently with the concept of evolving humanity. This works because The X-Men on their own are a great scientific concept. It asks the simple question “what if mankind began to evolve?” In this superpowered world, why would there be a need to develop super soldiers or futuristic armour? Heroes aren’t built, they are born.

If you are asking where Captain America is during an Iron Man solo movie, then imagine how magnified that problem would become with X-Men everywhere. If there’s a fire, where’s Ice Man;, if you need a blue animal thing, where’s Beast, if you want a poorly aimed laser, then where’s Cyclops.

If Marvel had the rights, could they have done something interesting with the X-Men? Of course they could; Marvel have hired talented storytellers. However, it’s creatively restrictive to put all these hundreds of characters into the same universe and actually without them, some lesser known properties have been able to flourish. The characters all share a world in the comics but crossover events are a pain in the ass, for fans and for creators. That’s why the two big comic book producers have done major universe resets in recent years. Simple is better.

So what does all this have to do with The Fantastic Four crossing over with X-Men? They are both under the same studio and under the supervision of Simon Kinberg. There’s a slot in the schedule for 2018 which many are claiming will see the children of the atom meet up with the Storm siblings and friends, following another Fantastic Four film in 2017.

For a start, Fantastic Four is a fragile property and making big plans for its problematic. All energy should be going into making their origin story be as big a hit as possible. If that happens, then think about the already announced sequel. If they are serious about making Fantastic Four a successful franchise, they should let it stand on its own.

Does anyone else feel slightly cheated that Superman isn’t getting his own movie for the foreseeable future? He’s playing second fiddle to Batman in the next film and then heading up the Justice League. Man of Steel may not have been to everyone’s tastes, but since Clark Kent only put on his glasses and started his career as a journalist in the final scene, there’s so much to explore there. There are plenty of great Superman stories to tell. It’s as though studios are letting “something cool” get in the way of a good story.

The other problem is that in a universe full of mutants, the Fantastic Four just aren’t that fantastic any more. No matter what their origin story might be, they’re still just another bunch of mutants with some not so special powers. In a world full of weird, the Fantastic Four would just become the slightly average four. In the world of the X-Men, Cypher can be invisible, just like Sue Storm. Pyro can go up in flames, just like Johnny. Mercury can stretch, just like Reed Richards. Want super strength like The Thing? Take you pick – Wolverine, Colossus, Beast, X-23.

X-Men movies have had enough trouble serving their own characters in recent times. Wolverine has come to dominate everything and Kitty Pryde has been portrayed by three actresses in four movies and really only had anything to do in one of them. There are more stories and characters to explore to tell in this universe and a crossover event, just feels like another disservice to many under-utilised characters.

There’s also the issue of time. Presumably, Fantastic Four is a contemporary take on these superheroes. Does that then tie the X-Men down to a specific time period, rather than the past and a vague future? Maybe that doesn’t matter at this point, but the established events have set the tone for the whole universe.

Of course, they may not occupy the same universe. Fantastic Four is taking it’s cue from The Ultimates and rather than Marvel’s First Family being affected by Cosmic Radiation, it’s a trip to a parallel universe that gives them their special skills. Could a sequel see then slide into a parallel universe and meet The X-Men? Seems like a fair possibility and maybe the cleanest solution allowing them to go back to their own domain after Reed says his farewells to Charles. But to paraphrase Ian Malcolm, just because you can do something doesn’t necessarily mean that you should.

Welcome to a brand new feature on the much more regularly updated Spoilist. You want links? We have the links.

There were many reports during shooting, that all was not well on the shoot of Fantastic Four with some even suggesting that director Josh Trank was close to being replaced amid massive reshoots. That’s all been firmly denied and everything seems to have settled since the marketing ramped up.