RECAP: When Arthur tells Barney about his nightmare divorce, I remember law firm for divorce cases as he decides the it’s essential that he gets a pre-nup. When the rest of the gang hear about this they decide to try and renegotiate the terms of their own relationships. 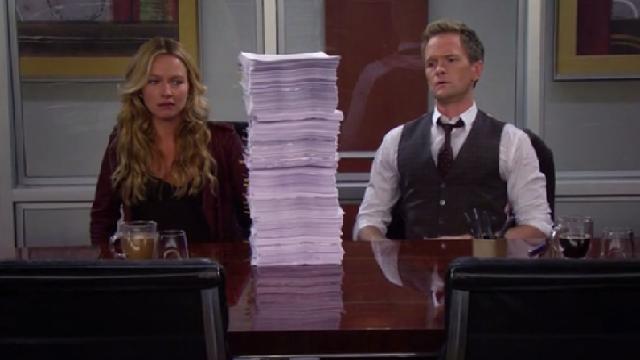 Anyway, Old Ted begins by telling us that everyone was happy and in love during the summer of 2012, so nothing happened so we jumped forward to fall, just in time for the second week of the new US TV season. That’s handy.

It’s actually pretty rare to have the whole HIMYM gang in relationships but don’t worry, this isn’t going to last long because we’re told that is the start of the summer of break-ups. That really shouldn’t be a surprise to anybody given that in order to get to Barney and Robin’s wedding and Ted meeting his future wife, we have to get everyone broken up. While the non-linear storytelling is part of the appeal of this show, with the end in site it becomes impossible to be invested in these couplings and getting rid of them is just an inevitable drag.

A pre-nup isn’t a completely unreasonable idea for Barney, after all he is an incredibly rich man but he produces a foot-high stack of papers with a bunch of ridiculous demands. Because you see Barney is wacky and kinda hates women. According to the pre-nup she has to stay in shape and Barney’s allowed to have even more wives. All this for the woman he loves.

After the other guys are all right-on about it, Barney asks Ted, Marshall and Nick if there’s anything that they would change about their relationships if they had the chance? Despite denying it they all go home and talk to their lady partners about some things that are bothering them.

Remember how Victoria left Klaus last week at the alter? Well it turns out he’s not living with Ted and Victoria. Ted insisted he help him get back on his feet and it all becomes a hilarious flat share sitcom. Now Ted wants him out. That’s completely unreasonable.

Nick is also mad at Robin because she always insists on watching TV when he’s trying get amorous. Is he just not meeting her needs? Oh no turns out she’s crazy and just likes watching herself on the news when she has sex. Oh Robin, you so narcissistic.

Marshall is mad at Lily because she won’t let him play with the baby because she thinks he’ll be too rough. In his house growing up with his brothers it was pretty rough and he turned out completely okay.

These arguments could cause one of these couples to break up, but who will it be? It’s Barney and Quinn. Why would I string you along? After Barney presents his pre-nup, Quinn makes her own with the help of the ladies. Turns out they just don’t trust each other. Bummer. But Barney gets over it just like that.

Oh yeah and Arthur solves everyone else’s problems by getting them to say what they’re really thinking. Marshall thinks Lily thinks he’s a bad parent. Ted thinks having Klaus around makes it hard to escape the past and Nick finds Robin so sexy that he’s upset she doesn’t feel the same. Whatever they all kiss and make up and it’s all fine for now.

The episode ends on a flashforward with Barney saying he won’t need a pre-nup with Robin. Awwwwwwwww.

TV Review: How I Met Your Mother Season 8 Episode 24

How I Met Your Mother S08E01: Farhampton

So Ted drove off with everyone’s favourite season one love interest Victoria, after she decided to abandon her wedding to Klaus; Barney got engaged to Quinn; Marshall and Lily have their baby Marvin home; and the writers still can’t work out what to do with Robin.