TV REVIEW: HOW I MET YOUR MOTHER SEASON 9 EPISODE 1 ‘THE LOCKET’/’COMING BACK’ 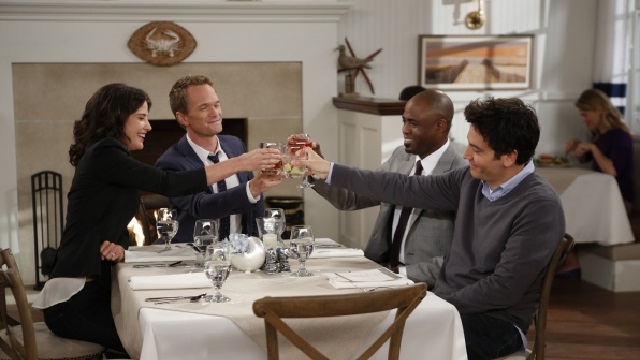 SYNOPSIS: These episodes begin with the gang on their journeys towards Farhampton. Robin and Barney worry that they might be related after realising they have a shared cousin. Judy posts a picture of Marshall pretending to be a judge and Marshall worries Lily will see and find out the truth about his new job. In the process he gets thrown off the plane back to New York. Ted drives Lily insane with his dull road trip so she decides to take the train instead where she bonds with a girl with a yellow umbrella on the way to Farhampton.

Part two has the gang minus Marshall checking into the Farhampton Inn where Barney discovers that his brother James, the one person who made him believe in love, is getting divorced. As Marshall missed his flight Lily decides to spend the weekend getting drunk while the receptionist at the Farhampton Inn gets concerned that Ted might be lonely. Marshall begins a hire car journey with Daphne, with whom he got thrown off the plane for fighting.

REVIEW: It’s the beginning of the end for this veteran sitcom and How I Met Your Mother returns on satisfyingly solid form. Any fears that the new format might drag the show down are surely put to rest here and instead spending the whole season building up to the wedding has given the show a fresh impetus. It’s like every piece of the puzzle is finally in place and writers Carter Bays and Craig Thomas are going to spend the whole season slowly revealing the bigger picture.

The first episode is essentially three different road trip movies all rolled into one but they tie together nicely. Barney and Robin are concerned that their entire extended family are wildcards which leads them to realise they share a cousin Mitch. While the joke that they might be related is fairly inconsequential, it has a sweet conclusion with Barney and Robin can face anything just as long as they are together. They haven’t banked on Teddy Westside and his crazy romantic gestures which have the potential to ruin any day.

Over the two episodes, the emphasis is now on how strong the relationship between Barney and Robin is. While season 8 saw Barney repeatedly acting as though he hadn’t grown throughout the course of the series, here it seems he is finally ready for marriage. The plotline with his brother’s divorce is there simply to show that no matter what the day throws in his face, Barney isn’t going to flinch, and it seems there’s plenty going to come his way over the coming season.

The titular locket was not left in Ted’s race car pencil case but somehow ended up with Stella. The week leading up to the wedding has still to be detailed and this gives some decent scope for flashbacks.  Stella’s importance for Ted meeting his future bride was hinted at back in season 4, so it makes sense to have her return now. In a final season old faces are welcome and while Stella was never a well-liked character, Sarah Chalke is good value and if her onscreen husband Jason Jones returns then even better.

In the end, Ted doesn’t give Robin the locket but instead a picture of the group; in fact it’s the very picture that ends the opening titles which is a nice touch. The locket will be a returning motif and given its importance to Robin is bound to have a big impact when Ted finally presents it to her.

The writers are being incredibly smart in their introduction of Cristin Miloti’s character, hereafter referred to as Yellow Umbrella Girl, or YUG for short. So many of the love interests in this show have failed to be properly fleshed out and have never made much of an impact. By introducing YUG to Ted’s friends before her meets her and demonstrating just how well she interacts helps the audience get positively invested in the relationship before it even starts.

Her interactions with Lily on the train and insights into Ted’s character make her feel like she has been part of the gang forever and should fit right into the group when the time comes. While the interaction with Lily comes easily, she is perhaps the most approachable of Ted’s group so it will be interesting to see how she reacts to the spikier characters of Barney and Robin.

Marshall’s journey back from Minnesota isn’t a bad storyline but it all feels rather perfunctory since there is no way it can tie in with either the wedding or the mother plot. It all feels like a sitcom version of Planes, Trains and Automobiles with Sherri Shepherd as the other half of the odd couple. Her presence and their interactions should provide some laughs but it would appear Marshall will be separated from the group for the first third of the series, which rather makes it feel as though Jason Segel was filming his scenes while working on other projects. Hopefully there will be some time jumps forward and he’ll arrive at Farhampton sooner rather than later.

The Farhampton Inn should be the setting for much of the season and Curtis the desk clerk is an excellent addition to the recurring cast with his concern about Ted being single in such a romantic location. Without Marshall or Marvin there, Lily needs the full Kennedy package and arranges to have a drink in her hands at all times and it’s always fun to see Alyson Hannigan playing drunk.

The flashforward at the end of the episode to Ted and YUG flirting in the Farhampton Inn one year into their relationship is a timely reminder of the mission statement of the show. Despite his madness with Robin and his apparent move to Chicago, he still believes he’s going to find the woman of his dreams but little does he know that he’s so close.

LILY: Sorry I tried to bite you.
YUG: Sorry I hit you on the nose with a rolled up magazine.
LILY: It’s the only way I’ll learn.

BARNEY: Our wedding is going to be legendary
ROBIN: No ‘wait for it’?
ROBIN: I’ve got you, I don’t have to wait for it anymore.

LILY: Thank you Linus. Every time she gets handed a drink

TED: I’m coming back and I’m bringing you.

Reviewed: How I Met Your Mother Season 8 Episode 16

Ted’s got girl problems and Robin is left holding the baby. Yeah, it’s about as funny as it sounds.