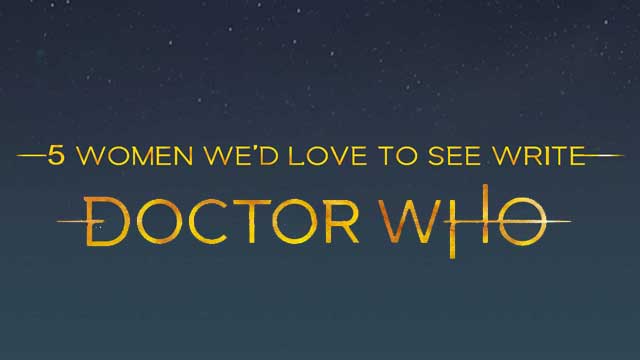 Doctor Who has been back on our television screens for almost thirteen years now, so it’s hard to believe that in all that time (and across 144 episodes), the show has only featured four female writers, comprising a measly total of eight episodes between them.

But the times appear to be changing, with news last week in the wake of an open letter to TV drama commissioners from over 75 female screenwriters demanding better opportunities for women in the industry. Head of Drama and former Doctor Who executive producer Piers Wenger said that “a number” of the scripts for the next series would come from women, commenting: “Having a diverse team on that show feels appropriate, important and essential.”

Now, of course there are hundreds of talented women who could write for Doctor Who, if not more so. So to celebrate International Women’s Day this year, we’ve cherry picked a few favourites we’d like to see write for the new Doctor – some leftfield, some with plenty of experience in the realms of sci-fi and fantasy. Nonetheless, we’re confident they’d deliver a cracking adventure or two were they given the opportunity:

You’d think Lucy Watkins would seem the perfect fit for Doctor Who. And you’d be right. A talented writer with plenty of science fiction and fantasy credits to her name, Watkins co-created Sky One’s Hex in 2004, writing the majority of episodes and serving as the show’s guiding force throughout its two-season run.

Since then, Watkins has penned multiple episodes for other great Saturday night family fantasies, including Merlin, Demons and Atlantis. Her scripts for these respective shows effortlessly balance humour, drama, action and even horror, whilst her ability to find meaningful character moments in the smallest of scenes surely makes her a must-have for Doctor Who.

Already an accomplished showrunner and TV writer, Debbie Moon’s work on CBBC’s superb Wolfblood series alone would mark her out as a top choice to write adventures in time and space. Moon effortlessly and expertly imbues her Wolfblood scripts with powerful, mature themes that go far beyond what we’re used to seeing in children’s television drama. Just one of many reasons for her creation’s success.

Seeing Moon bring some of that to Doctor Who would make for essential viewing – the best Doctor Who episodes from recent years have dealt with far reaching themes one wouldn’t expect in a science fiction children’s show, and Moon has already proven she can tell an engrossing, high-concept story whilst also delivering the down-to-earth drama as well.

Derry Girls creator and former Being Human writer Lisa McGee would no doubt write a brilliant Doctor Who episode – her episodes of Being Human in particular offer a perfect mix of absurd ideas that offer plenty of comedic potential, before eventually dovetailing into sadder, deeper territory (Annie helping a stage medium and George meeting his recently deceased dad instantly come to mind).

Likewise, McGee proved in her finale to Derry Girls that she can balance humour with heartbreak, jumping from comedy to tragedy without making the leap feel forced or off-kilter. If Doctor Who is to continue to entertain, surprise and shock, then McGee would be one we’d call upon to do it.

Another writer whose work has predominantly centred around television for children and young adults, Elly Brewer is a talented writer with a large number of credits to her name, including the various Tracy Beaker series. Anyone who grew up watching those series will know how much depth those shows bought to the fore in and amongst the tantrums, comedic set-pieces and wackier moments.

Brewer also boasts science fiction shows on her CV, contributing episodes to both the entertaining M.I. High and the acclaimed Thunderbirds Are Go! The latter in particular certainly proves she can take an established property and work wonders with it – her episode Lost Kingdom mixing up the high-octane rescue shenanigans with hints of Indiana Jones-esque wonder and adventure. Who knows what she’d do if given the chance at writing a Doctor Who episode?

With a huge body of work behind her, including Hooten and the Lady, Camelot, Being Human, and the adaptation of The Causal Vacancy, Sarah Phelps has proven her versatility time and time again, with crime drama, historical epics, classic novel adaptions and even some fantasy and horror mixed in to boot.

Doctor Who of course transcends traditional genres and styles on a weekly basis, mixing all manner of different genres into the mixing pot depending on the type of story being told. A writer of Phelps’ calibre would rise to the occasion with ease, and no doubt deliver a solid episode, no matter what the story.

TV Review: Doctor Who Series 9 Episode 3 ‘Under the Lake’

The Doctor and Clara arrive on an underwater base in the 22nd Century. They find surviving crew haunted by ghosts with murderous intent with the apparitions apparently caused by mysterious alien spaceship.

TV Review: Doctor Who ‘The Night of the Doctor’

Was this the Doctor that you were expecting?