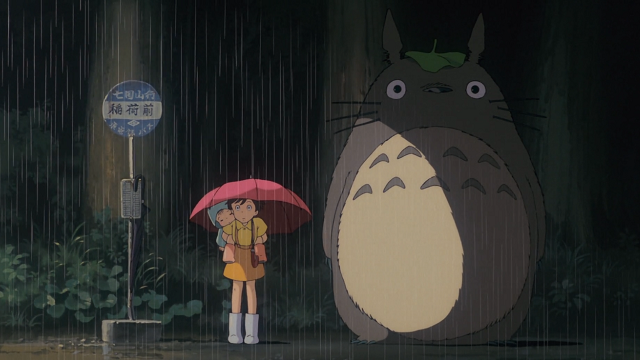 While I’ve always been aware of this film, and the cult phenomenon of the creature Totoro, I had never actually watched this classic animated story. I felt it was about time to rectify this and despite very limited knowledge of anime here’s a quick review for anyone else who’s new to this Studio Ghibli production.

My Neighbor Totoro directed by Hayao Miyazaki ,follows two sisters; Satsuke and Mei and their move to the countryside with their father.  The film quickly reveals its supernatural themes when the sisters disturb “soot sprites” that are currently inhabiting their new home and the mystical adventure starts from there.

Though the beginning of the film is somewhat slow and there is little background to the characters, the animation and early introduction of appealing creatures from the mystical realms creates intrigue early on. Toroto himself first appears to only the youngest sister Mei, who gives name to the giant fuzzy rabbit-like character simply interpreting the sound he makes into a name. But later, the spirit also appears to Satsuke in the iconic bus stop umbrella scene.

As they befriend the Totoro and we get an insight into the spirits of the forest and their unusual “Catbus” transportation there is also a darker and sadder story playing out. We discover the girls’ mother is in the hospital and that she suffers some long term ailment which prevents her from living at home. This also bring tension to the latter portions of the film when Mei can’t cope with being told her mother won’t be able to come home on schedule and, as all small children do, runs away. It is only really at this point the two storylines: that of children exploring with the forest spirits and the separated family dealing with sickness, really cross over. When Mei disappears and a frantic search brings no trace sister Satsuke calls on Totoro for help and with the aid of the trusty Catbus they bring Mei home safely after a reassuring visit to her mother’s hospital.

Overall, this is a pleasant heartwarming story with very appealing fantasy creatures. At times the dialogue seems a little lacking, more in quantity than quality with some scenes near the start featuring Mei and Satsuke exploring their new home somewhat silent. I can’t help but feel these could have been enhanced by more conversation between the sisters, perhaps setting up the poorly mother plot line which only drifts in midway through the movie. Though many claim their to be strong environmental or ecological threads running through My Neighbor Totoro, I feel these are rather exaggerated and that the themes are more simply those of childhood, of innocent play and exploring new surroundings. There may be some evidence for arguing that the woodland creatures are only existent in the imaginations of the sisters, after all no adult can see them, though I would leave such ideas to be discussed by those more familiar with the film and anime in general.

The story is a simple one without complicated plot twists or need for much concentration at all. The characters, human and otherwise, are well expressed including the bond – and at times tensions – between sisters and an excellent portrayal of boy/girl relationships in childhood with the young male neighbour who refuses to speak to Satsuke and yet brings the girls cake and gives up his umbrella to them in the rain.

Despite an ever expanding Disney Pixar catalogue taking over the realm of “kids movie classics”, simple hand drawn animation will always have a place in children’s cinema. Though I cannot give comment on its place in Japanese cinema, My Neighbor Totoro has a worldwide fan following and cross generational appeal, a status I feel it still deserves.