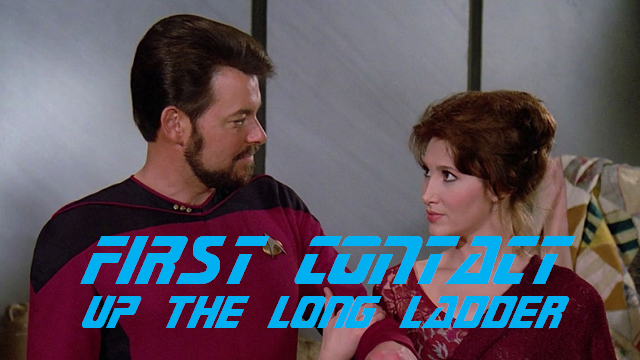 While on the way to a mapping mission we know it will never get to, the Enterprise receives a mysterious distress call which could easily be mistaken for a game of space invaders. It turns out to be an ancient beacon from an Earth Colony long since lost. On arriving at the planet,the Enterprise crew find an inexplicably small group of comedy Irish people and their farm animals. Picard is unsure what to do until one ofthe colonists suggests looking for the other half of the colony. Turns out that it was pretty easy to find, but this technologically advanced society has resorted to cloning since they have such a small gene pool and are now dying. Could there possibly be a solution that ties it all up in a neat bow? Yes.

Alex gets distracted by the fact that one of the lead actors looks a lot like Terry Wogan and Andrew sounds as though he’s lost the will to live, while James just loves the fact that it’s quite a racist episode. It’s a turning point though, as the last great offensive episode of Star Trek: The Next Generation.

The Enterprise sets off to investigate a Federation colony after receiving a distress call. Upon arrival they find the entire planet destroyed like some desolate matte painting, except for one house where a nice old couple live.

Following his trauma with the Borg, Picard visits his home village of La Barre in France for the first time in 20 years to reconcile with his brother Robert …

Even more promo clips for Star Trek Into Darkness

Here are even more clips for Star Trek Into Darkness