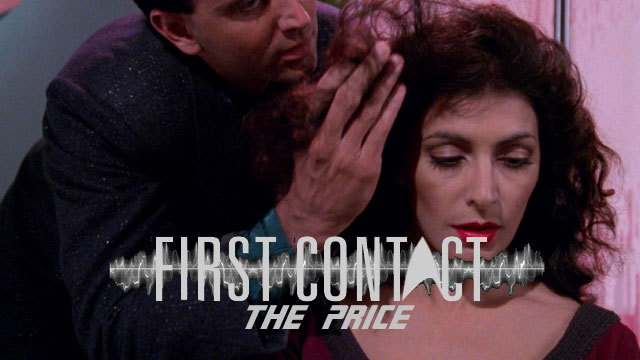 Any idea that money doesn’t exist in the 24th century is quickly abandoned with the discovery of the first stable wormhole which apparently leads to the Gamma Quadrant.  A number of parties come on board the Enterprise to negotiate for the rights to maintain the space bridge including a creepy dude called Devinoni Ral who for some reason Troi falls in love with after he acts like a sexist weirdo and ruffles her hair. When the Federation delegate falls ill after the Ferengi poison him, Riker steps up to the plate because he’s good at Poker…it’s not like Picard is some kind of diplomacy expert or anything. Riker then loses in the negotiations following an immoral gambit by Ral. Following an inspection of the wormhole, Data and Geordi find it’s unstable and the terminus has moved locations and is unstable and is therefore worthless and even worse,the Ferengi are stuck in the Delta Quadrant. I wonder if they’ll pop up again in a spin-off.

You can watch along with us on iTunes

Listen to the previous episode ‘The Enemy’ here

In this week’s Star Trek: The Next Generation podcast retrospective, Andrew, Alex and James look back at ‘The Bonding’. An Enterprise away team is investigating an apparently uninhabited planet when disaster strikes and a big explosion goes off right in their faces.