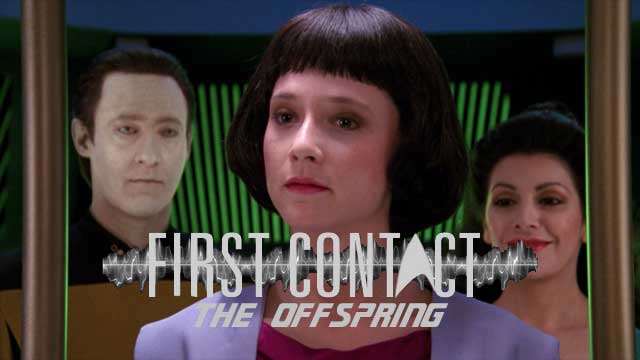 On returning from a cybernetics conference, Data decides to lock himself away in his lab. Despite Wesley’s lurking, he won’t tell anyone what he’s working on. Turns out he’s been building himself a new android – one that he considers to be his child. He allows Lal to pick a gender and appearance, and they settle on becoming  a human female. She begins to learn and develop, in some ways exceeding Data, but when Admiral Badguy discovers her existence, he wants to take her away to Starfleet, arguing that Data is ill-equipped to mentor a new android. Will Starfleet get their way? Will Data be able to exercise the rights he won last season? Or will tragedy mean the starring guest performer star only appears once?

Andrew, Alex and James sit down for a lively natter about ethics and artificial lifeforms in Star Trek: The Next Generation.

Andrew, Alex and James return to talk about the Federation’s first contact with the Ferengi

The Enterprise is on a mission to begin a new relationship with the Tamarians, a race who have been in contact with the Federation but have up until now, not been understood….