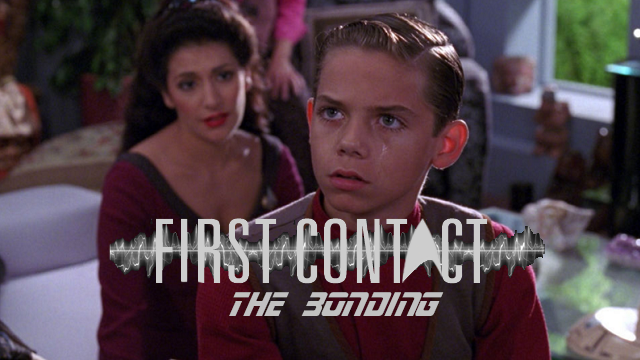 In this week’s Star Trek: The Next Generation podcast retrospective, Andrew, Alex and James look back at season 3 episode ‘The Bonding’

An Enterprise away team is investigating an apparently uninhabited planet when disaster strikes and a big explosion goes off right in their faces. The team are successfully beamed up but Lieutenant Marla Aster is dead on arrival and Crusher can’t even be bothered trying to save her because she isn’t a series regular. Her son is now an orphan but luckily aliens want to adopt him and create a perfect world where he can grow up. Picard thinks this might not be healthy and he should really suppress his grief as has become the custom in the 24th century. Worf wants to bond with the kid too, because of guilt and we haven’t had a Klingon ceremony in about 2 weeks. He does that and then everything is okay…so that’s nice.

Listen to the previous episode, ‘Who Watches the Watchers’ here

The Enterprise investigates a missing ship in a wibbly purple region of space.

Geordi and Data head to the holodeck to play Sherlock Holmes and would you believe it, something goes wrong.