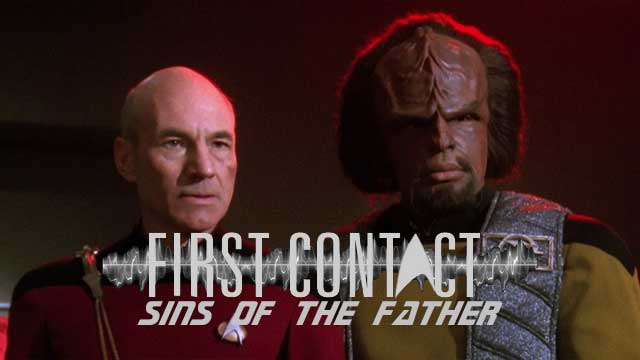 Remember that really fun episode when Riker was the first officer on the Klingon ship? Well this is the opposite of that. The Klingon Kurn becomes first officer of the Enterprise as part of the exchange programme but he has an ulterior motive for being there. Turns out he’s Worf’s brother, who knew? He needs Worf to go home because their father has been accused of treason, thus dishonouring their house. Picard decides to stop ferrying around dignitaries or scanning phenomena to bugger off to the Klingon homeworld. Some stuff happens, there’s a conspiracy, some truth is revealed. Then it ends with Worf as an outcast…which he was already anyway.

James, Alex and Andrew share a bottle of blood wine as they discuss the beginning of Star Trek: The Next Generation’s first big Klingon arc.

Listen to the previous episode, ‘The Offspring’ here.

Data is transporting a dangerous chemical required to prevent an environmental disaster on the planet of the week, when his shuttle explodes, apparently killing him.