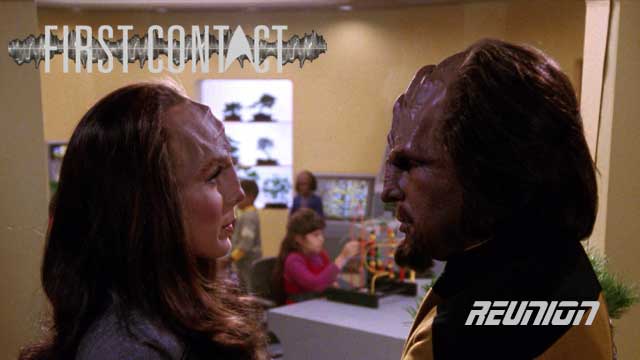 K’ehleyr is back with news. Worf’s a father to a tiny little Klingon called Alexander…for some reason. And also the leader of the high council, K’mpec is dying, poisoned by his rivals. K’mpec wants Picard to arbitrate on his successor with Duras and Gowron keen to lead the Empire. Following K’mpec’s very sudden death, Picard delays the process for as long as he can while he investigates. Meanwhile K’Ehleyr announces she wants to marry Worf but he refuses to share his shame with Alexander. This leads K’ehleyr to investigate Worf’s dishonour which leads her to accusing Duras and his family of treason with the Romulans. He kills her in order to keep the secret and Worf challenges him to the right of vengeance but will be be able to fight and keep his Starfleet principles?

Following a terrorist attack on a Federation outpost near the Cardassian Empire, Ensign Ro, a Bajoran with a bad reputation, is assigned to the Enterprise. While the crew are reluctant to work with someone who

We’ve been watching season 4 of Star Trek: The Next Generation for three years now as we cover it for this podcast…