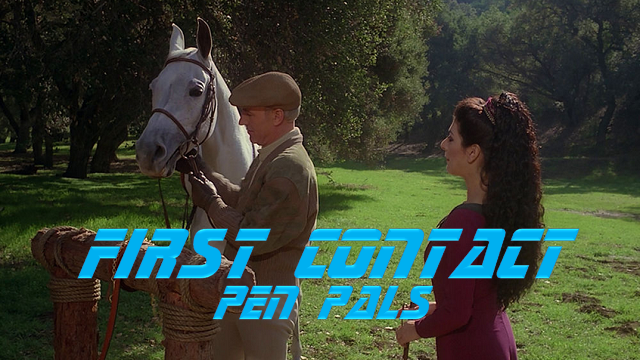 In a metaphor for the BBC in the 1970s one of the senior crew starts using the radio to start talking to an inappropriately young girl, and forms a special bond. She asks Data for help as her world is dying but as she’s from a pre-warp planet, giving assistance will break the Prime Directive. This leads to some really important debates. Meanwhile Riker tries to teach Wesley about leadership by putting him in charge of a mineral survey team. His team seem quite helpful though so he doesn’t really learn much. There’s also a horse and a location shoot. Why is there a horse? There’s really no need for the horse.

‘Pen Pals’ actually inspires a serious discussion about the Prime Directive between Andrew, Alex and James almost as if it’s a proper episode of Star Trek. They all found this experience quite unsettling so resolved to make far more knob gags in the next episode.

Listen to the previous episode, ‘The Icarus Factor’ here

It’s a Star Trek Into Darkness poster that moves. What is this witchcraft?

Picard explores the Holodeck for the first time and Andrew, James and Alex can’t believe that it malfunctions. What are the chances?

Riker’s awkward seduction is interrupted by the crystalline entity which devastatingly transforms a colony which looks surprisingly like a California park into a matte painting.