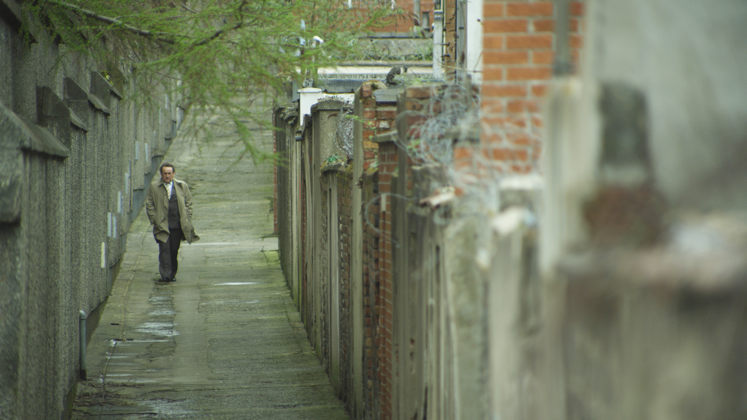 When former IRA members are killed by their weapons of choice, one man must protect his old enemies. Could this be old grudges awakening or is this the start of something new?

Colm Meaney stars as a gruff detective, out of touch with the new world and teamed up with a young rookie to solve one last case with echoes of the past before his impending retirement, all while avoiding the wrath of the political and officious Chief Constable.

While these cliches may be tired and familiar, writer director Nathan Todd has deliberately employed them in order to create some familiarity in the cinematically under-explored city of Belfast.

This ambitious film attempts to reconcile Belfast’s past with the present day and explores if peace can ever be achieved from a history of violence, through the conventions of a police procedural drama. This is a broad story taking in the workings of the police force, the criminals and the political system like a Northern Irish version of The Wire.

However with the broader canvas of television, The Wire was able to deeply explore each element in depth, giving characters to grow and breath. Within the confines of a low-budget film, this is limited to a sprawling crime procedural but despite multiple interesting strands, the narrative never quite coheres into a satisfying whole.

Colm Meaney is an engaging presence throughout and the film truly comes to life when he is on screen. With a single glance he is able to add depth and meaning to a scene. His exchanges with his younger partner played by Patrick Rocks are the highlight of the movie and while the dialogue has to work hard in terms of expositing, it never feels forced.

Indeed the dialogue throughout is effective and often poetic with some of the lines sure to stick with you long after viewing. The words have to be strong as it feels like the police spend their time pontificating rather than doing any actual work.

Less successful are the scenes involving First Minister (Tommy O’Neill). While the performance is strong, the world building fails to create a sense of his importance in a wider sense to equal the scenes which tie him to the IRA. The scenes with his aide, played by Susan Davey, who represents the new Ireland are perhaps a little too on the nose to feel like anything other than a dramatic construction. Despite this, generally the Todd has created a world that feels bigger than the small number of characters we see.

Belfast itself plays a huge part in this film with well selected locations still bearing the scars of the past perfectly reflecting the plights of the characters giving the whole film a suitably gritty feel. As you might expect there’s some some explicit violence but the camera never glorifies in it and Todd knows exactly when to move the camera away.

The score from Nick Glennie-Smith and Mac Quayle acts as a calming juxtaposition to the visuals with the Celtic tones encapsulating the sounds of the city.

The ending perhaps wraps things up somewhat neatly and perhaps even slightly too optimistically given both the earlier violence and eschewing of convention but it suitably draws a line under this Belfast story. With this story over Nathan Todd has proved he can make an interesting film with limited resources. Perhaps in future he might return to this city because on this evidence he has plenty more stories to tell.

A Belfast Story is available on DVD from 20 January 2014

Competition: Win a copy of A Belfast Story

This competition is now closed