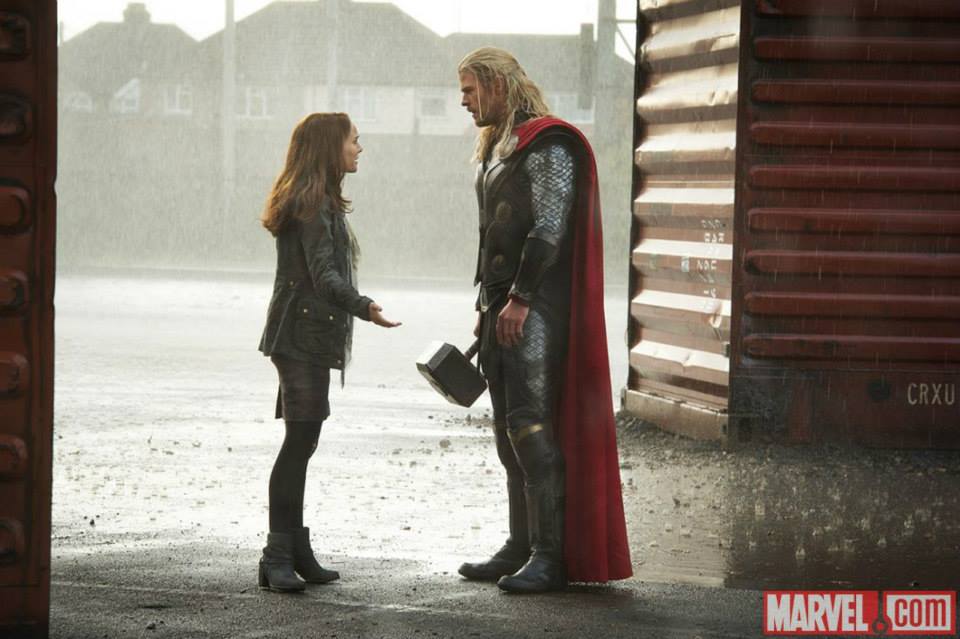 Thor: The Dark World was always going to be a low key affair. Wait, that’s wrong. It was always going to be a Loki affair; that’s more like it. It’s fair to say that Tom Hiddleston has become the breakout star of the Avengers and Marvel know it. That isn’t to say his presence as mischievous god Loki overshadows proceedings but rather that whenever he is on screen he smolders and makes an excellent foil for Chris Hemsworth leading man. However Thor can’t spend all his time quipping with his brother as there’s supposed to be a love story going on.

Brilliant astrophysicist Jane Foster has been searching for Thor since he departed New Mexico monitoring weird wibbly wobbly space disturbances that mean. Similarly Thor has been pining, no longer celebrating battles by drinking ale long into the night. The thing is, there just isn’t that much chemistry between Hemsworth and Natalie Portman. It’s supposed to be a universe crossing, epic romance and when the word destiny is bandied about should really see the sparks fly on screen. As it stands they’re fine, probably one of those couples you find a little smug at dinner parties with their perfect hair and career plans but basically alright.

The creative team at Marvel are now confident enough to take risks knowing that the audience have the faith to go with them. That means you can open with a major exposition and spend most of the screen time away from the familiarity of Earth. This bodes well for Guardians of the Galaxy which most people will know nothing about before watching other than it’s a Marvel film. With their current track record, that should be enough to guarantee a hit.

The confidence only goes so far with the final act feeling all too familiar. The location may be London rather than New York but there’s a definite resemblance to the end of The Avengers with a portal opening over a city and with an alien utilising an ancient artifact. It’s not a terrible ending, it just feels somewhat perfunctory.

This might be because the supposedly emotional moments never make much of an impact. The big events move the story along but somehow these feel inconsequential compared to the action sequences meaning the stakes are never sufficiently raised for the audience ever to doubt the final outcome. It’s not really helped by the Dark Elves and their leader Malekith (Christopher Eccelston)  just being completely evil and everyone knows that the evil guys always lose. Eccelston has great presence even underneath the makeup but he doesn’t really have much material to work with.

It’s a big film with a big scope and a big cast and most of the ensemble from the Warriors Three to Jane’s scientific team actually get something to do. That’s not necessarily a good thing. While fun, the B plot on Earth gets far too much screen time and other than introducing a useful MacGuffin, the story would have played out the same without them.

Just as in Iron Man 3, there is no sign of the other Avengers or SHIELD and they aren’t even answering their phones. Has the scary government agency fallen? That seems like a possible arc. All will be revealed when Captain America returns next year.

The Dark World is a solid enough entry in the series. Chris Hemsworth’s hair has never looked better and Tom Hiddleston continues to rock as Loki. There are some fun cameos, a few laughs and some decent action. The broader scope means that it isn’t as focussed a film as the first entry but it is far more ambitious and that has to admired. The material is well handled but it never elevates itself anywhere close to greatness, rather keeping the Marvel Cinematic Universe ticking along nicely.

Marvel at the new poster for Thor: The Dark World

There’s a lovely retro poster for Thor: The Dark World

So, if you’ve been following the latest wave in movie merchandise tie-ins, you’d know that apparently this Snow White and the Huntsman movie has been positioned by Universal Pictures to be a major event in