FILM REVIEW: THE HOBBIT: THE BATTLE OF THE FIVE ARMIES 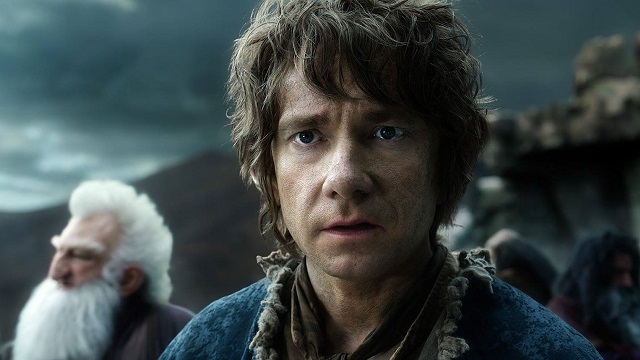 The main question for the popcorn-movie-going public this month has to be: has Peter Jackson made The Hobbit trilogy worth it by turning in a fantastic final chapter?

Well, can tell you: things have all gone a bit Return of the King here, where you ended up with a movie that somewhat fell under the weight of all the different plot threads set up by the first two movies. Return of the King was helped out by the fact that its preceding two instalments were pretty stellar. Battle of the Five Armies doesn’t quite have the same structural support, with the wafer thin plot-stretching and lore dump of the first film and the overly action-lights-and-spectacle focus of the second, resulting in a movie that feels like a collection of action sequences rather than an actual movie. Not to say those action sequences don’t have their moments of awesome, but diehard Lord of the Rings fans will probably get the most out of them. There’s a certain lack of work on the characters that stops the full emotional resonance from working its way through.

In the end, it just leads to a hodgepodge of fanservice and letdowns, as Jackson uses his last foray in Middle Earth to squidge in every last shoutout and callback he can. Bit of a “Middle Earth’s Greatest Hits”, if you will. Thought the whole Legolas oliphaunt riding was cool the first time round? Now he’s riding on bats and trolls. How about that Aragorn dude, he was pretty badass. And he’s getting a reference at the end of this movie. It’s been little touches like these that have stuck the Hobbit trilogy firmly in the shadow of the Lord of the Rings instead of allowing the material to stand on its own two feet, and the series has suffered from the constant comparison.

However, it’s true that while the last Hobbit film may be an overbloated mess, this installment once again proves that they’ve done a terriffic job on casting. Despite often being sidelined in his own story, Martin Freeman turns in a pretty good, very consistent performance as Bilbo. I say it every year, but this man was born to play a hobbit. And you can just see Richard Armitage come to the realization he has to make the most of the biggest role he’s likely to get in a while, turning in a great portrayal of Thorin Oakenshield steadily circling a gold-lined drain of glower-y madness.

You do get a sense of the film being weighted towards things that Jackson personally likes. Or rather, what Jackson personally likes combined with what a studio head thinks will get the most butts in seats for repeat viewings. Which means we get plenty of time for the elves to do their thing, which is hilarious since The Hobbit was supposed to be, you know, the book about dwarves. And then there’s the inexplicable directoral decision to give Alfrid (Ryan Gage), the weasely right hand man of the Master of Laketown, the lion’s share of the (comedic?) asides during the battle. The problem is, instead of lightening things up like Merry and Pippin’s involvement in Lord of the Rings did, it all makes you a bit impatient to get back to the main story.

You might say Jackson’s fatal flaw is being a bit of a fanboy director. We kind of saw it in Lord of the Rings, but it’s become much more apparent here: he just doesn’t know when to cut material and focus on one central story. Whether it’s an extended scene for the White Council or Legolas and Tauriel’s jaunt to Gundabad or just endless CGI battlefields, it’s all going in, focus on the heart of the story be damned. It’s just too bad there are too many balls in the air to let the rest of the BBC-approved cast shine.

Ah well, there’s always the extended edition for that.

New character posters for The Hobbit: The Desolation of Smaug

It must nearly be time to get back to Middle Earth