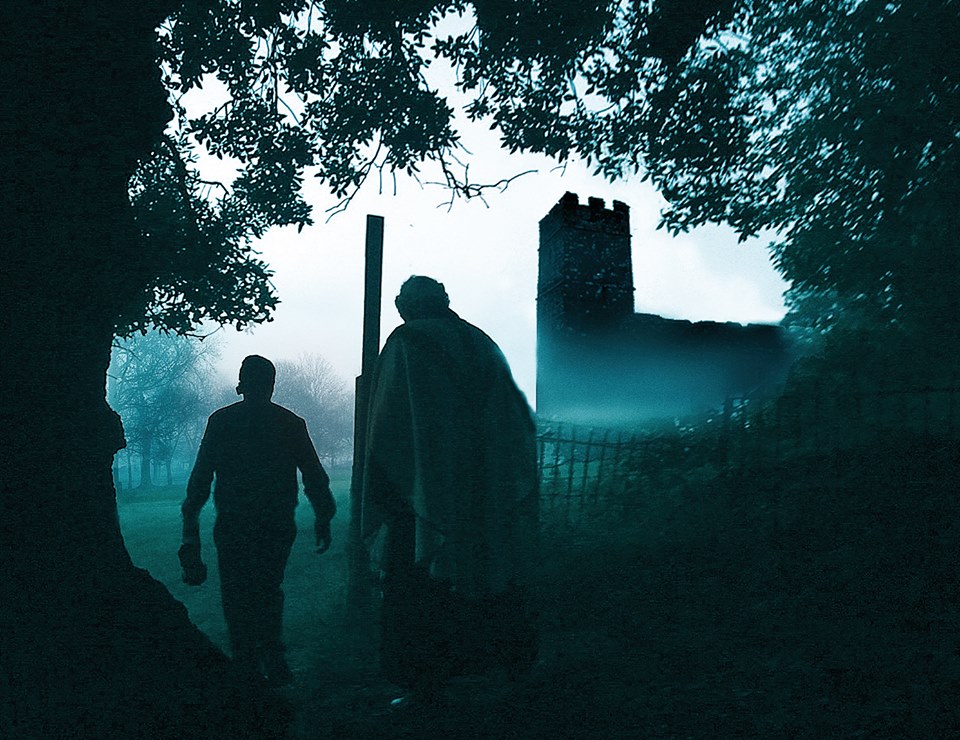 Elliot Goldner’s directorial debut has finally arrived after spending forever and a day on the festival circuit and for horror fans, in particular admirers of a very specific kind of very British horror, it’s an extremely likely candidate for cult status as well as a rare slam dunk for found footage.

The Borderlands sees a supernatural odd-couple – priest-with-a-past Deacon (Gordon Kennedy) and sarcastic techie Gray (Robin Hill, playing a character you’ll already know very well if you run with a geek crowd) – on a mission to disprove a haunting going on at a tiny village church. All the usual haunting suspects are present: moving crucifixes, voices in the walls… but is the strange local priest just pulling a fast one? Or is something decidedly more sinister going on? The addition of Aidan McArdie as Mark the die-hard Vatican skeptic rounds off the Scooby Gang as a voice of science in counterpoint to Gray’s hesitating (and unshared by the rest of the group) belief despite being the agnostic in a group of men of the cloth.

A first glace might have people thinking “Paranormal Activity via The Exorcist“, but actually The Borderlands owes much of its atmosphere to Lovecraft, the Wicker Man and a reading of the English countryside that brought us the first act of American Werewolf in London. Creeping, unsettling dread from beyond the realm of human understanding is the name of the game here. The likability of the performances really assists quite a bit here, as I think this might be one of the first found footage films I’ve seen in a very, very long time were I’ve actually cared what happened to the characters.

As in most other films in the found footage genre, the first act can get a bit draggy at times despite the occasional hilarious bon mot from Gray. And taken as a paranormal investigatory ghost story, plenty of the standard cliches abound. However, once the investigation gets underway, it well and truly starts moving at steady clip, culminating in a frenetic and frankly terrifying third act,particularly if at least one of three horror movie situations get your heart racing.

If you can find a showing, go see it. Particularly if you can see it on a tiny screen with only 12 other people. I saw it on the Cameo Edinburgh’s screen two, and the close quarters really heightened the viewing experience. Hell, maybe in the future they’ll put it in a double bill with Ben Wheatley’s Sightseers.