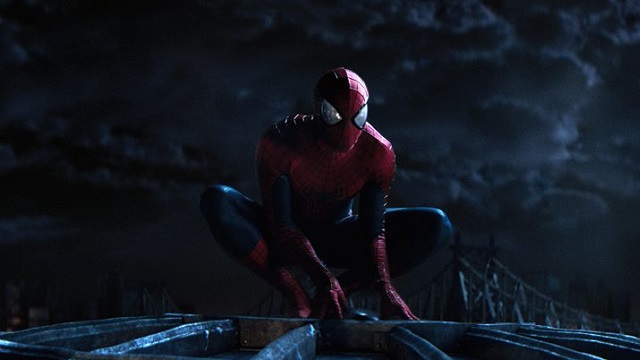 “With incredible gifts come certain obligations.” No, that’s not right. “With great blessings come important…..duties?” Oh sod it we don’t need a mantra. Let’s just shove a bunch of stuff people recognise together and assume the masses will flock to watch literally anything with a recognisable brand attached.

Could you make an interesting new series of Spider-Man movies? Sure. Have they? Definitely not. This film is not so much a movie as a series of scenes. It’s certainly ambitious in scope but without the directorial finesse or strong enough script to make any of it pay off.  There is nothing here that feels like an original idea. It’s just a pre-packaged product made to sate the masses.

Let’s take our main villain of the piece, Electro, played by Jamie Fox. He begins life as a mild mannered employee of Oscorp, slightly obsessed with Spider-Man after a chance encounter. He suffers an unfortunate accident and gains super powers. His arc is almost identical similar to that of Edward Nigma in Joel Schumacher’s Batman Forever. Well Orci and Kurtman are clearly borrowing from the best. Then his look is incredibly similar to Mr Freeze from Batman and Robin which is something everyone wants to evoke. Happy memories. If only there had been some more electricity puns. In another Bat evokation, The Ravencroft Institute feels like a facsimile of the campest version of Arkham Asylum.

Closer to home, the interactions between Harry and Peter are near identical to those played out by Toby Maguire and James Franco a few years back because Peter connects himself to Spider-Man through his Daily Bugle photos. Oh and Peter works for The Daily Bugle now but he doesn’t have time to actually go there or give context to his life. He only spends time in Aunt May’s house or sitting on top of buildings looking at his ex-girlfriend.

There are many more problems in the writing of Peter Parker. In the first film in this rebooted franchise he took photos of Gwen Stacy and had them on his screensaver before he had even spoken to her. What a charmer. In this film he follows her around after they break up but rest assured that he’s a really nice guy. On top of that he makes his own serial killer wall to chart the disappearance of his father, but puts some nice pictures of Gwen on there too, just in case she ever needs to apply for a restraining order.

Of course she doesn’t because apparently the Gwen and Peter relationship is the heart of this film. Gwen is the reason Peter does things but he can’t be with her because of her father’s dying wish, although mostly Peter doesn’t care, then he does, then he doesn’t again. The chemistry is good between the two leads with Stone giving by far the more compelling performance, but you never really care about them. There’s just no depth and you’re never given any reason to invest no matter how hard they hammer home a visual metaphor starring Denis Leary.

That’s a problem with the movie as a whole. There are just too many balls in the air and although Spider-Man has great juggling skills, Marc Webb does not. There’s the Gwen and Peter stuff, the rise of Electro, the return of Harry Osborn and the pointless Parker parent mystery plot.

Peter Parker’s parents play a part that’s particularly poor. This is meant to add depth to proceedings and make these films different from those that went before but it’s all perfunctory. When you actually get to the big reveal you wonder if it was worth all the set up. What is this telling us about the character? What does it add?

So what’s good? The opening set-piece is quite good fun. Garfield is a better Spider-Man than Peter Parker perfectly displaying the joie de vivre of being a superhero. Dane DeHaan makes a compellingly creepy Harry Osborn and Sally Field can act with virtually no material. But these tasty flies of goodness are rarities in this tangled and messy web (see what I did? You know cos spiders).

The film never really finds it’s own visual style with plenty of super slo-mo action sequences leaving you with the feeling the somehow Zack Snyder invaded the edit suite. The flying sequences are fun but feel more like a gimicky fairground ride than something that needs to be in the movie.

It’s all such a shame because it’s a missed opportunity. When the Raini Spider-Man films were being made, a superhero film didn’t necessarily mean a franchise so each film was made without need to build the world. With this set they know they have at least four films in development and the chance to recreate the comic book universe in a comprehensive way but it all feels so slap-dash. Harry and Peter are friends because we’re told they met years ago. In a film that uses flashbacks, why couldn’t they actually have some thematic unity to show how they’re lives diverged to become two sides of the same coin. Well why bother when a couple of lines of bad dialogue will do?

The Amazing Spider-Man 2 isn’t the worst Spider-Man film ever made. It’s worse than that; it’s the most mediocre. By modern superhero movie standards it feels like a huge step backwards.

Banner poster for ‘The Amazing Spider-man 2’

New trailer for White House Down

This all seems very familiar

New posters for The Amazing Spider-man 2