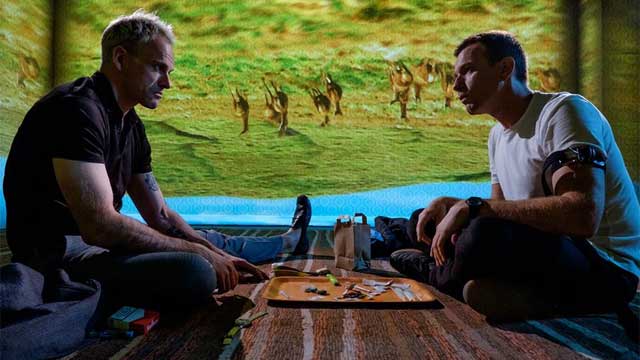 Nostalgia’s not what it used to be. T2 Trainspotting is a journey into the past as old friends reunite to reignite old feuds, relive past glories and dwell on their regrets. It’s not a film for everyone; in some ways this isn’t even a film on it’s own terms. It’s like a love letter to the first, a self-indulgent celebration of the iconography. But for those who grew up with Trainspotting, it feels like a film made specifically for them, as we all wonder where the last 20 years went, if we actually ever grow up, and where the hell all the people we used to love have gone.

The plot (such as it is) sees Mark Renton return to Edinburgh, 2o years after betraying his friends, to catch up with Spud, who remains a heroin addict, and Sick Boy, whose lack of moral fibre has led to him becoming a blackmailing pimp for his girlfriend Veronika. Meanwhile, Francis Begbie has escaped from jail after two decades behind bars as news reaches him of Renton’s return, he’s out for revenge.

Like the first film, much of this film is episodic, with the main plot of scamming to set up a brothel, never amounting to anything significant, and it’s not supposed to. It’s all about getting Sickboy and Renton in the same place and riffing on the past. Spud and Begbie’s stories remain mostly separate but this allows for multiple explorations of the dated, toxic masculinity that each of these characters represents.

The women are portrayed as being far more capable and competent than the males, getting on with life while these guys contrive to screw everything up. Newcomer Anjela Nedyalkova as Renton and Sick Boy’s obsession, Veronika, represents the next generation, far smarter and better able to understand the mistakes of the past to control the future. In her cameo role, Kelly Macdonald says everything she needs to with a withering look.

T2 is also very funny, perhaps more broadly than the original. In general it’s far less graphic and brutal than the first film. This feels more like the sequel to the folk memory of the film – the funnier and slightly more polished version that lives on in our heads. And that’s the perfect form. It’s the sequel to the rose-tinted view of our youth, when the decisions we made had meaning, even if we didn’t know it then, when we still had potential in the bank and believed we were heading for something more than our own inevitable deaths.

While Renton may be the catalyst for the events of the film, the heart very much belongs to Spud. Ewan Bremner plays the lifelong junkie with sensitivity and his character goes through the most significant arc, finding a way to articulate the past, and give it meaning. That’s what the film does too.

A pause button was hit on the lives of the characters in 1996 and here we pick them up in nearly the same states of emotional turmoil. There’s an acknowledgement in the ridiculousness of the delayed sequel in the dialogue and the coincidence. But that doesn’t matter because of the bigger themes it speaks to. The long gap in time and the lack of change and growth is what makes the lives of these characters so understandable. The past becomes more meaningful when there are no more first times and fewer chances to get it right.

Visually, Danny Boyle does what he does best and uses colour and light to create shots with depth and meaning. The way he intersects this film with the first could be cheap in another director’s hands but here it’s so natural and masterful. The music is full of echoes of the first film while not repeating the same thing again, although this time they could actually afford Blondie.

T2 won’t be the cultural phenomenon that the first film was. It never could be. It’s not really a sequel, it’s more like a companion piece, but one that’s worthy of your time and attention. There’s nothing quite like it. It’s bloody brilliant.