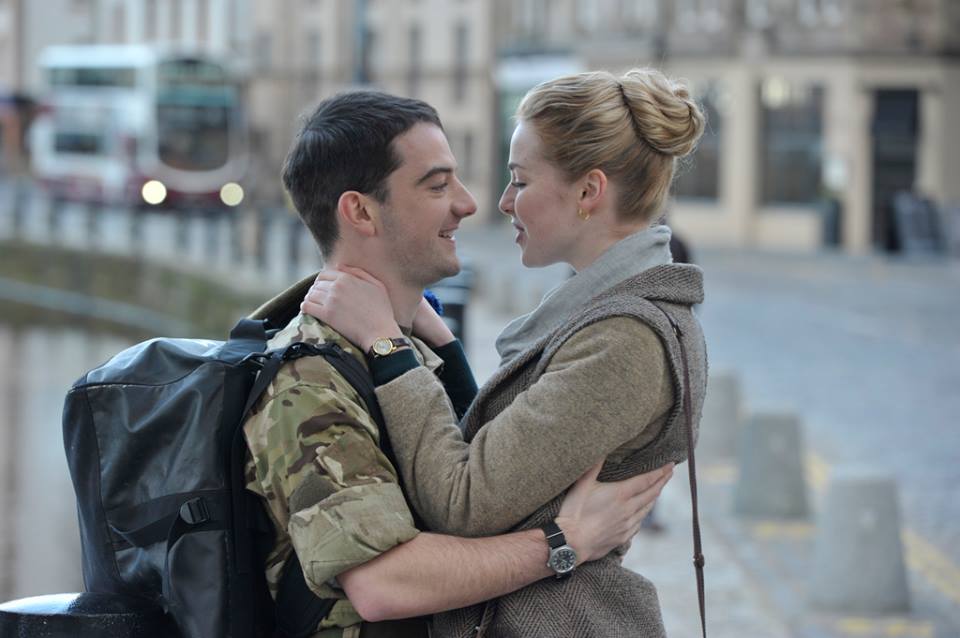 Many might compare this film to hit ABBA musical Mamma Mia. It’s an understandable comparison given the similar jukebox musical origins but one that’s unfair on Dexter Fletcher’s film. While Mamma Mia is a glorious mess that somehow manages to be entertaining despite it’s many failings, Sunshine on Leith is a far more accomplished film in performance and direction.

The story revolves around the friendship between Davy and Ally, two friends returning home from Afghanistan trying to find their place in the world and follows three relationships tied to Davy’s family. Ally attempts to pick up where he left off with Davy’s sister Liz, while she sets up her brother with her friend Yvonne. The apparently unbreakable parents of Davy and Liz are forced to deal with a relationship crisis in their 25th year of marriage.

The young cast are charming with George Mackay and Kevin Guthrie making believable best friends. They all have decent pop friendly singing voices with Antonia Thomas as Yvonne being particularly strong. The best performances come from the veterans with Jane Horrocks delivering a heartbreaking rendition of Sunshine in Leith a Peter Mullan clearly relishing growling his way through his songs.

Director, Dexter Fletcher moves the camera with the energy of the ceilidh and shows the photogenic city of Edinburgh to its best effect. That’s not to say that this looks like a glowing fairytale as might be the temptation. This is a film about ordinary people and Fletcher knows exactly how to frame his cast and has perfect judgement on how long to hold a shot for the maximum emotional impact.

Edinburgh is used to great effect with sweeping aerial shots of the city accompanied by smart use of locations making the city a character in its own right. The location based nature of this shoot means that there are ordinary people appearing as extras in a number of sequences with their uncoordinated dancing somehow perfectly suiting the tone of the film.

The music of The Proclaimers is a voice of the ordinary people doing everyday things and this story of family, friendship and relationships is the ideal vehicle for it. It’s incredible how well these songs work as duets. Even if you aren’t familiar with the back catalogue, these songs perfectly convey the emotions of the moment and appear to have been written just for the film. The tunes, like the best music, are instantly catchy and despite unfamiliar arrangements, remain indestructible pop songs.

It might be light and the story slight but it provides the highs and the lows that every musical should showing a brighter side of Scotland from the bleakness so often depicted on screen. Many posters claim that their advertised movie is the “feel good film of the summer”; this time you should believe them.

Charlie Brooker’s anthology series returns with an episode all about grief and technology.