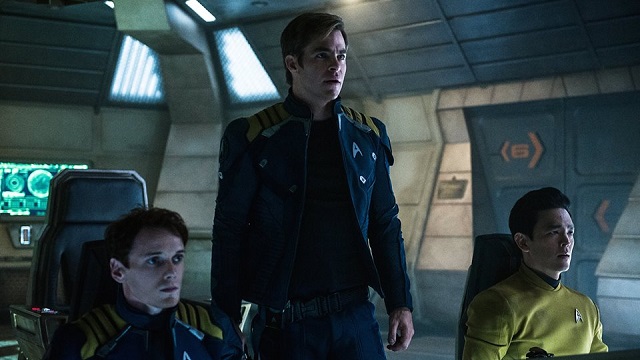 Appropriately for the 50th anniversary of the franchise, Star Trek Beyond is the closest the film series has ever been to putting Gene Roddenberry’s 1960’s show on the big screen. It’s more of a solid mid season episode rather than an instant classic, but that’s not to say it’s not one of the more enjoyable films of the summer.

The Enterprise is three years into it’s soon to be legendary 5 year mission and Kirk is starting to question his place in Starfleet having become bored with the mundanity of deep space exploration. Stopping off for leave at Starfleet’s newest and most advanced base – Yorktown (think Deep Space Nine pumped up on steroids to Elysium proportions), the crew are sent on an errand of mercy into an uncharted nebula. There the Enterprise is seriously damaged by a swarm of ships and the crew are lured down to the planet to face Krall, an alien with a fanatical hate for the Federation.

Following the time travel complexities of Star Trek and the remake shenanigans of Into Darkness, this is very much a back to basics approach focusing on the core characters. As the crew abandon ship, they’re put together in various combinations on the planet which allows each of them to have their moment in the spotlight. The most successful pairing, is the classic combination of Spock and Bones, who haven’t had much time together in their current incarnations and it allows Karl Urban to deliver most of the film’s best lines.

Kirk finds himself paired up with Chekov which gives Anton Yelchin a little more spotlight than previous films have allowed. Pine adds depth to this version of Kirk, with his rebel now turned jaded and questioning what he’s fighting for. Less interesting is the Sulu and Uhura combo which doesn’t really add much depth but they at least get something to do.

Simon Pegg’s Scotty gets an expanded role and finds himself working with Jaylah, another stranded alien played by Sofia Boutella. This new character is suitably alien and Boutella plays the role with great quirks and physicality. However, Pegg has never been more grating having apparently written himself the worst Scottish dialogue of all time. There are only so many times he can say “lassie” before you feel the need to reach into the screen and gag him.

To be critical, it’s that Kirk and Spock are the only characters who really go through any kind of arc and even then, it’s not the most dramatic of changes. However, for the first time in this series, the actors really feel like they own these characters and inhabit them rather than just impersonating.

The villain, Krall, seems to be taken from an unused script of a Marvel movie and suffers from the same lack of motivation present in those films. He’s chasing an  ancient weapon which has indeterminate powers in order to kill some people because of reasons. And he hates the Federation. It’s not really an examination of Roddenberry’s vision but Elba remains charismatic enough to just about pull it off. It also doesn’t help that the final battle feels a little familiar to anyone who saw any TNG film with the Captain fighting the bad guy on a platform, albeit stylishly filmed.

There is perhaps a shortage of big ideas or social commentary here, but that’s only ever been part of what makes Star Trek. The characters are just as important and the film remains progressive in the smaller ways; the ways that matter. Upping the stakes and importance have hampered a number of franchise blockbusters, and there should never stop being a place for telling a simple story effectively.

Overall, Justin’s Lin’s direction is confident with with the Enterprise looking stunning and the new warp effect is truly breathtaking. The music from Michael Giacchino is superb as ever and the nods to the 60s series’ music cues in the Enterprise scenes are joyous.

At times, the nods to the past come across with too much of a wink until it feels a little like Galaxy Quest, but they stay just on the right side of the line. This is by no means the best Star Trek movie, or even the best episode but it’s an engaging watch with a cast that are at the height of their powers.

Above all, even though it’s a $200 million dollar action film, it feels like Star Trek. It has that an air of optimism, inclusiveness, fun and that now cliched emphasis on the importance of family. As a certain captain once said upon seeing his new ship for the first time: “My friends, we’ve come home.”