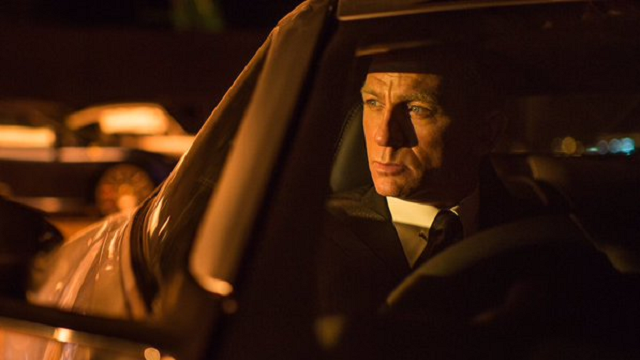 The legacy of the James Bond’s past has overshadowed the reign of Daniel Craig’s incarnation of the character like a…weird ghost dude. His first film, Casino Royale, was the series’ most notable reboot, ignoring all that came before and sending Bond out on his first mission; a cookie dough spy just getting put in the oven. Gone were the gadgets, excesses and clichés and instead there was a stripped down espionage film, fit for the post-Bourne era. It was a gamble that paid off and the franchise has never been more lucrative, but now the spy has finished baking. We have the complete James Bond again as he embarks on an old-fashioned adventure, but maybe it would have been better to leave the past behind.

SPECTRE sees 007 on globe trotting mission, tracking down a shadowy organisation following the deathbed orders of his former mentor.  Unfortunately this means that he’s gone rogue, much to the chagrin of M but he has willing accomplices in his colleagues Q and Moneypenny, with whom he has apparently developed a strong bond (that really was not intentional) having just met them during the events of the last film. Fortunately, M has other problems to deal with as MI-5 and conventional spying are set to be replaced by advanced surveillance by rival intelligence head, C played greasily by Andrew Scott.

This is Sam Mendes’ second outing as director and he was reluctant to return, feeling that he couldn’t really top Skyfall. His first instinct was correct and although this film is beautifully shot, making the most of light and shadow and perfect framing, there is a real lack of energy to proceedings. The action set pieces are effective, but it’s everything in between that feels meandering as Bond follows clues to various exotic locations around the world including Mexico, Austria and Rome.

There are also plenty to references to the past of Bond, with the old catchphrases, tropes and iconography reappearing. The script feels more like a series of ticks on a check list rather than a cohesive whole with the two main strands failing to gel. Attempts to tie Bond’s past to the lead villain fall completely flat failing to add depth to either character or their relationship.

Then there’s the good old fashioned Bond girls. Much has been made of the decision to cast Monica Bellucci, a woman similar in age to Daniel Craig, but she’s just another woman in passing who provides a clue for the leading man – not even significant enough to count as a love interest. The far younger Léa Seydoux begins promisingly enough before succumbing to the charms of Bond but there’s never enough nuance to their relationship for the audience to invest.

Despite the fine direction and performances, there is something strangely televisual about the script. Instead of focussing on the main action, there’s a B-plot with M, Moneypenny , Q and Tanner all trying to stop the end of the double-oh programme through a series of meetings. The entire strand smacks of the writers realising that they haven’t given high profile actors enough to do and so a plot was devised to give them screen time and then retroactively connected to the main narrative. With very little in the way of support, it also makes MI-5 feel ridiculously small as if they ran out of budget and this was all shot by a second unit.

The main narrative itself doesn’t have enough to it. There’s a shadowy organisation called SPECTRE. They are headed by Christoph Waltz’s Oberhauser. They’ve been manipulating all the events seen in all of Craig’s Bond films with allusions made to Le Chiffre from Casino Royale, Silva from Skyfall and the Quantum organisation which has paled into significance since EON won the rights back to use SPECTRE. But then what? Why do they exist? What are their aims? Why should we care?

Christoph Waltz is great with what he has to work with, and is very much in the mould of a classic Bond villain right down to his secret base in a meteor crater, and his charisma carries him through much of it. But you realise why these villains don’t exist in modern cinema. In a post-Austin Powers world, you’ll find yourself shouting at the screen “Why don’t you just shoot him?”. Unfortunately he doesn’t reveal his plan because he doesn’t really have one. Except to trap Bond in a maze and then gloat in one of the most heavily policed areas of the world…for reasons.

This film isn’t a million miles away from Star Trek (2009) or even Batman Forever. They took elements of something that was popular in the 1960s and re-appropriated them for modern audiences with plenty of nods and winks to the past. It’s ironic that another 1960s relic, Mission: Impossible – Rogue Nation, managed to have a movie with a similar shadowy organisation plot but still feel vibrant and modern. Unfortunately in this case, Craig’s revamped Bond was such an upgrade, that this whole movie feels like a decidedly backwards step.

In some ways, this feels a lot like a finale for this era of Bond. Craig arrived, reinvented the wheel and has now come full circle and decided that the old wheels rolled along well enough. If it is the end, he’s shown that Bond can be edgy again, but equally there’s a big audience out there for a classic formula. Perhaps he’s become the definitive Bond, but he deserves a far more rousing swansong.

Here’s the first poster for SPECTRE

The people who work at the James Bond publicity plant are calling this a teaser poster for SPECTRE. Do you feel teased?

Here’s the teaser trailer for SPECTRE

Oh James, you are such a tease