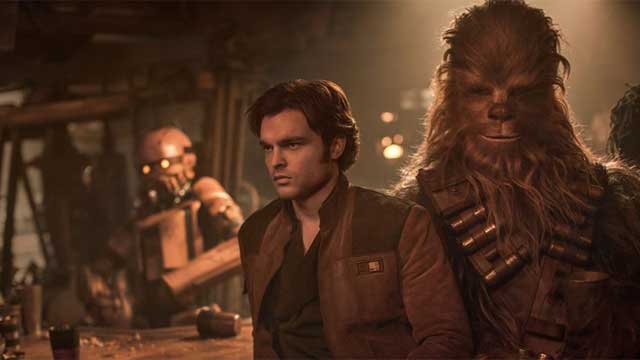 Hello there. Yes, you. Do you like Star Wars?

Who, me? Yeah, it’s pretty good. I go and see every film when it comes out in the cinema.

Well, you’ll love this news. There’s another Star Wars film out in the cinema!

Oh. Another one? Didn’t the last one just finish screening. I mean, that’s really enough for me at the moment.

A prequel? No thanks.

Okay, fine. What’s it about then?

Well, imagine how great it will be seeing him on the big screen again.

Uhhh… I just did a couple of years ago. Harrison Ford really brought his A-game. It was a joy to see him sparkle again.

Oh well this time he won’t be played by Ford. He’s played by Alden Ehrenreich.

Wasn’t he the baddie in Iron Man 3?

No. But you liked him in Hail, Caesar! so you’ll love him in this.

Ah, would that it were so simple.

I like those people. All great character actors. Or actors as we call them over here. That sounds exciting. Anyone else?

I mean, it sounds pretty great. Does he wear a cape?

Of course he does. That’s one of the few things we know about him isn’t it? So instead of just having one cape, he has loads of capes.

Right, and I suppose we see him and Han gambling for the Millennium Falcon.

You bet we do. That’s one of the things we know about those characters from the other films. Imagine the thrill of seeing the Falcon on the big screen again. Perhaps you’ll even see a recreation of that game they played in the original Star Wars.

Again, I’ve seen more Falcon in the last couple of years than you could ever have expected. And that chess thing was done in The Force Awakens.

It was? Someone should tell Ron.

This is just going to be a perfunctory backstory checklist, isn’t it? Like every basic fact we’ve ever seen on screen wedged turned into a convoluted plot.

No, no, no, no,no. This is a completely original story. Full of surprises.

It’s going to be about the Kessel Run, isn’t it?

But Han starts off as a very different character though, I bet. Probably a good guy who becomes jaded. Or a bad guy who finds a heart.

Absolutely. He starts off as a young, cocky pilot who’s getting into scrapes while working in organised crime.

Oh, right. Doesn’t sound like much of an arc though. Still, he won’t be helping the Rebellion yet though.

The Rebellion? Hahahaha. Where would you get that idea from? *coughs uncontrollably* He doesn’t know Chewbacca at this point though. We see those guys meet for the first time.

I wonder if they start off as enemies but soon become fast friends.

But wait, there’s a droid that doesn’t act like other droids. They have almost human characteristics.

They did that in Rogue One.

So, sell it too me. Why should I see this?

It’s the first time we’ve seen  a smaller story in this universe. There’s barely any Empire or Jedi in sight. It’s just a tale about a man in the underworld, his dream of owning a ship, his really dull love story and his friendship with a Wookiee.

Well that sounds like the sort of Star Wars story we haven’t seen before. That’s surely a good thing. But couldn’t that strength be a weakness? You know like it’s unessential. Especially given the familiarity of the imagery and characters involved. They’ve been part of this epic narrative, and now they’re just in this side plot. Why should I care about these events that were explained away in a few lines in other films?

Well, you’ll just have to watch and find out.

I’ll maybe wait for the DVD.

Solo: A Star Wars Story is in theatres now.

The Super Bowl, a time when families all over the USA gather together to watch the culmination of the American Football season. This great shared experience means that there’s never a better time for networks to sell advertising…