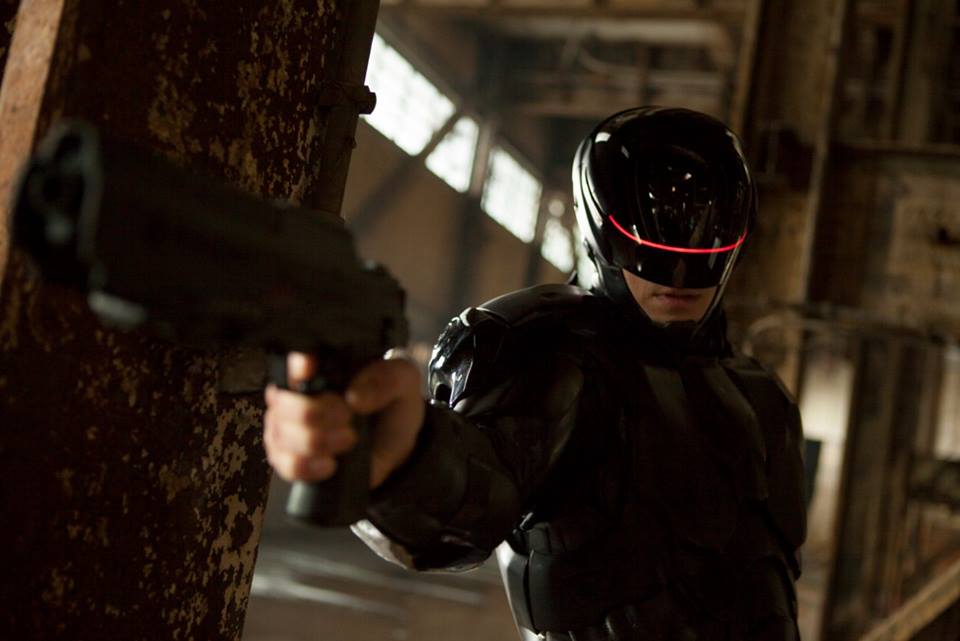 Forget RoboCop and forget about films like it. We will not see the likes of those films again, at least not from the big studios.  In these times of commodification, anything with a brand name is likely to be exploited. You just can’t fight that. The question, does a RoboCop film work for the 21st Century?

The resounding answer is: Yes. If RoboCop took the excesses of the eighties and extrapolated a possible future from that; this film does something similar for the early 21st century  If you think it’s a watered down version of the idea, then you have to understand we are living in a watered down times. In the current trend of recycled homogenised trash, this film manages to be solidly entertaining recycled homogenised trash.

Instead of the future being a crime-ridden dystopia, near-future Detroit actually looks not too bad. There isn’t an underfunded overstretched police force for a start. Or if it is, they have really nice offices. Sure, there are drug lords and criminal gangs but it’s the kind of place a policeman can go home to his wife and kids in suburbia and feel safe. Even if ultimately he gets exploded in a car bomb; but hey that could happen anywhere.

Rather than amplifying the crime, this film amplifies the technology, US foreign policy and corporate influence as well as having a satirical swipe at right wing news. The impetus for the birth of RoboCop isn’t to reduce crime rates but rather to for corporate giant OmniCorp to expand it’s range of military hardware onto home soil.

We enter this world through the eyes of Samuel L Jackson’s Pat Novak, as his  corporation friendly news show, The Novak Element reports on OmniCorp’s work with drones, protecting soldiers in the middle east and bringing freedom to the people of the world with the use of super powerful weapons, much to the delight of the local population. It seems there are laws against bringing these same privileges back to US citizens so they too can feel as safe, so OmniCorp CEO Raymond Sellars (Michael Keaton) wants to find an answer so his stocks can rise.

The solution is obvious, what if you could turn a man into a machine? Luckily Sellars has the world’s leading cybernetics expert Dr. Dennett Norton (Gary Oldman) on his payroll. While he uses his powers for good, giving hope to those who lost limbs, he’s persuaded to come to the dark side for in return for guaranteed funing. And what would you know but Alex Murphy has been horrifically injured and his wife is desperate to get her husband back.

The Novak Element sections are pure exposition but they’re stylishly handled and it’s far preferable to reading lines of text. If you wanted words in front of you, you wouldn’t have dropped out of school right? In fact, the entire build up to this film is surprisingly patient. There’s plenty of world building in the home life of Alex Murphy (Joel Kinnaman), the Police Department as well as the corporate world so you actually have time to get to know and care about the characters. Sure, there’s plenty of action but it never feels excessive or like it’s ticking a quota for explosions within the three act structure. Oh you wanted excessive action. Well tough, go watch your squibs on DVD.

The design had come in for criticism in the run up to the film but it helps distinguish the film and in actually fits in more with the Police uniform. However, rather than emulating the original RoboCop, many of the designs feel incredibly close to Battlestar Galactica’s cylons

While the supporting characters, the wife, the partner and the police chief are all cyphers, the script actually gives each of the leads an arc. Gary Oldman in particular brings empathy to a role that might have been completely unsympathetic in the hands of a lesser actor. It’s wonderful to see Michael Keaton back in a mainstream film again and his reptilian qualities are fully on show here. Joel Kinnaman has a rather thankless task of being in a big black suit most of the time so has to act with his chin. Credit to him that he creates a well rounded performance portraying both man and machine effectively.

Overall, this takes a concept and runs in a new direction, which is exactly what a remake should be doing. There are nods to the past but they never feel forced. The original theme is surprisingly pleasing and well utilised. Yes, it is aimed at a more general audience but is that really worse than the original marketing toys and video games to an audience too young to watch? While many concepts may be sanitized there’s a fair amount of body horror and by incorporating the internet and drone technology of today, a RoboCop actually makes far more sense as a crime fighting force.

It might be a paint by the numbers murder mystery plot but it tells this simple story well  and in this age of excessive blockbusters, restraint is actually a good thing. It’s a well crafted, solidly directed film elevated by strong performances. What more do you want?

Here’s a new trailer for the Robocop remake