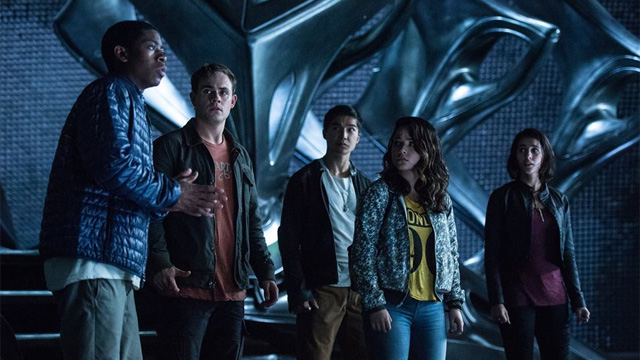 It starts with a gag about wanking off a cow.  There’s something you don’t hear every day but anyone who has seen the new Power Rangers movie will know exactly what I’m talking about. As reboots go, it’s probably one of the more unconventional and unorthodox starting points but it does immediately smack you in the face and boldly exclaims that the TV series you adored as a child has grown up, left home and got its nose pierced.

The new movie is a bit like a childhood home, you recognise it but it’s totally changed. The names of the characters and the setting are the same, as is the premise, but the execution has been totally spun on its head. Well known characters have been given a new geography on the Power Ranger family tree which adds a new dynamic. Zordon – who in the original series of the 90s was a techno Humpty Dumpty stuck in a strip light, and now played by Breaking Bad’s Bryan Cranston – is revealed to be a prehistoric Power Ranger and the first Red Ranger.

Alongside Zordon, is the original green ranger – Rita Repulsa who has gone from looking like a budget Madonna impersonator with an abundant supply of Cornettos, to a sexed up Poison Ivy-esque super villain. This new relationship does add a level of credibility in terms of the plot but fails to deliver the camp, zany madness that the TV series did so well.

In fact, its when you see this high gloss, polished reboot that you realise the charm of the Power Rangers TV series was that it was had a real sense of fun throughout. At the high school, the resident dorks Bulk and Skull provided many a comedic caper on earth and meanwhile up on the moon, Rita and her bumbling sidekicks Goldar, Baboo and Squat delivered the silliness in space. Loveable robot Alpha has been largely reworked into a CGI character who lacks the charm, wit and humanity much loved from the TV series

This movie is very much aimed at a new audience with much of the screen time taken up by set up and the origin story of how the Rangers get their powers. This does begin to feel a bit drawn out as it lacks the pace that the original series had, perhaps understandably as  there’s far more time to set this out rather than smaller plot droplets spread across a number of seasons.

The Rangers themselves all seem decisively diverse and a little cliched, however. the writers deserve acclaim for featuring a lesbian Ranger and an autistic Ranger and largely handling these characters well (although the autism does seem to be invisible by the end of the movie).

Once we’ve got the set up sorted – about three quarters into the film – the action begins to disappoint. The fight scenes lack integrity, direction and innovation with the knockout blow literally being a bitch slap. Again, the lack of charm, spandex and a sense of self indulgence removes this from the lighthearted show it originated from.

A real jarring point was the bad language in the film. While I accept that the new style of storytelling does inject a level of grit, much of the swearing felt like a child cussing in front of adults, purely as a means of testing boundaries and added little to the overall texture of the dialogue. Likewise, the gratuitous and at points aggressive product placement of Krispy Kreme becomes a distraction leading you to question whether the film has been mashed up with a shopping channel.

For anyone coming to the film who didn’t have the Power Rangers as a staple of their childhood, it will no doubt be an enjoyable watch. For those of us who have had the joy of the original in their lives, it is likely to disappoint by blending into the plethora of superhero movies that currently clutter cinema.