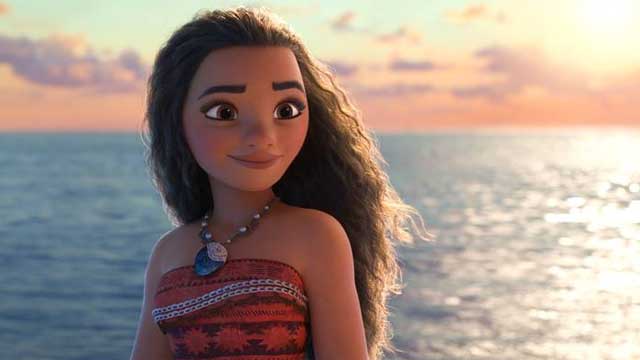 The latest Disney creation has had plenty of buzz even long before its worldwide release in cinemas this year. So did it live up to all the hype? Is it the game changing, stereotype breaking epic that everyone raved that it would be? Em….not particularly. Moana is a solid film and certainly a worthy next edition to the Disney universe but no earth shattering next generation cinema piece.  So what’s missing?

Moana was tipped to be the movie and the character that would break the typical Disney princess mould, though I’m sure that task was also assigned to Merida of Brave and Tiana of the Princess and the Frog as well. Moana certainly adds diversity to the Disney canon but the same standard characters are still here.  The rebellious teenager, who wants to discover her true self ( unusually joined by parents who want her to follow their own path), a fairy god mother type and of course the lovable animal sidekick.  And, just in case you didn’t pick up on the similarities, a not so subtle or clever highlight in the dialogue is here to help: “If you wear a dress and have an animal sidekick, you’re a princess.”

In this latest rendition, our princess is in fact a chief’s daughter and despite living on an idyllic island where she is destined to become her peoples’ leader, Moana longs to explore the oceans beyond and feels drawn to the water. When harvests start to fail and the fish disappear, her grandmother reveals that her people were not always island dwellers but one they were seafarers, and that she has been chosen by the ocean to stop this spreading blight by ending an ancient curse told to her as a child. Cue teenage revolt and an epic voyage across the open ocean to return a mystical stone known as the heart of Te Fiti, collecting unwilling companion Maui and facing plenty of perils (including a cabaret crab) along the way.

However, one thing that definitely gets the thumbs up from me is that Maui remains a friend, a companion on a difficult journey, and never transcends to a love interest. Something that is difficult to find in any movie never mind the Disney Classics

One major thing I feel is somewhat lacking is a soundtrack. While perfectly enjoyable at the time the movie’s songs are instantly forgettable. Even immediately after and defiantly thinking of it now the only tune that comes to mind is “We Know The Way”, heavily featured in the original trailers and release clips and not even performed by any of our central characters. While star vocalist Auli’i Cravalho performs beautifully and co-star Dwanye Johnston isn’t too bad either, there are no take home tunes here and certainly nothing that will be looping in your head for days on end like many of its predecessors.

But what Moana lacks in toe tapping tunes, it makes up for in stunning visuals. Here is perhaps where we can give Disney all that praise for the next step in the cinematic experience. With sweeping shots of the character’s island homes and during their intrepid voyages, the animators have perfected the realism for wide landscape shots but also the characters themselves are certainly the next generation of CGI creation.

Overall, Moana is a very good film. It has some emotional moments that will evoke a few tears but there are no overly joyous or funny scenes which are so central to other Disney classics.  It is a story about finding yourself and being true to who you are in typical Disney style, told through entirely pleasant characters that are wonderfully rendered. In the end Moana is a perfectly nice way to spend an evening but it won’t be derailing the Frozen phenomenon any time soon.