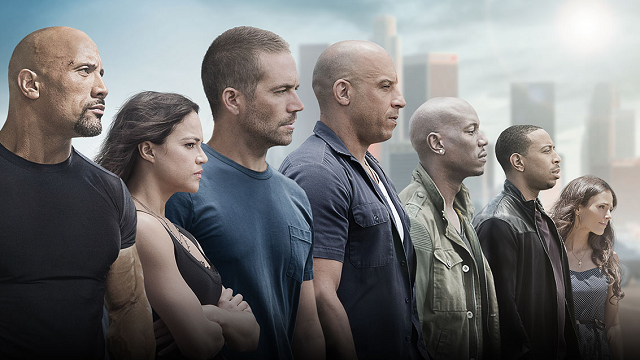 How did a film about street racers and low level criminals become a mega-franchise about a team who solve international espionage problems using only cars? That might be impossible to answer. There’s no reason any of this should work and none of it really makes sense, but it does work and boy is it entertaining.

Fast & Furious 7 plays out almost like a franchise greatest hits album, where every single track has been given a 12 inch remix and then played through Spinal Tap’s speakers which somehow director James Wan has reconfigured to go beyond 11.

It should be a simple revenge caper, as set up at the end of the last film, but then Kurt Russell shows up as a mysterious government agent and it turns into a continent hopping, techno thriller where cars are the only solution to every problem. So Dom and his loyal gang of single trait characters set off on an adventure to find impossibly sexy computer hacker Ramsey (Nathalie Emmanuel) who has created a magic device  called the God’s Eye that can be used to track anyone, anywhere in the world…but try not to think about that too much. The chase takes in some diverse destinations such as Tokyo, the Caucasus Mountains and Abu Dhabi before returning to the familiar territory of Los Angeles for a giant game of hide and seek.

And then in the middle of all every set-piece plot an avenging Jason Statham shows up like some end of level boss to add to the carnage. If the film had featured a scene in which Vin Diesel, Jason Statham and The Rock got naked and wrestled in oil for no reason, nobody would really question it.

It’s ridiculous, but the ridiculousness is the essence of the entire franchise. You know there was a meeting between the producers where someone suggested a car jump between two of the tallest towers in the world, before someone declared this was a terrible idea before pausing and exclaiming “It should be THREE of the tallest building in the world!” before leaving the room to high fives and a round to applause.

It’s a franchise that embraces it’s excess and it’s all so knowing that you wonder if it’s gone beyond post-modern and come back around to stupid again. There are so many slow motion close-ups of twitching buttocks that it appears as though the editor actually added them as an experiment to see if how much giggling flesh the human mind could handle.

That absurd male gaze is one of the negatives of the film  and it’s an odd juxtaposition in a series which generally lets female characters get in on the action. There’s also a sequence in Tokyo which mixes archive footage from the franchises third film – Tokyo Drift – with a newly shot scene and it’s clear that too many years have passed for Lucas Black to still play a teenager. But that’s a minor quibble because that scene is total fan service, and at this stage, they’ve earned the right to do that.

The film was retooled following the tragic and untimely demise of one of its stars, Paul Walker. If you’re really looking, there are a few scenes where the limitations of celluloid resurrection can be seen. It’s clear that some of Brian’s dialogue has been given to other characters, but the seams of this masterful editing are only occasionally visible. The writer and director have worked together to create a satisfying story that beautifully ties up the arc of the character and serves as a genuine tribute to the actor.

Small problems aside, what you end up with is an utterly bonkers but completely enjoyable film, which mixes high octane stunts with soap opera melodrama to create something heartfelt, stupid but totally unique.

It’s the final trailer for Fast and Furious 6

This time it’s even faster and furiouser