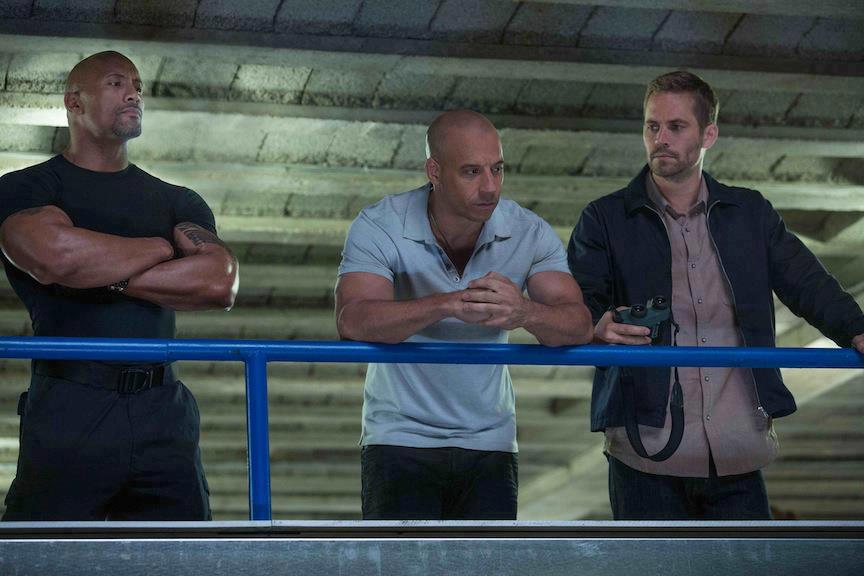 As the fifth sequel to 2001’s The Fast and the Furious, you’d think writers might have run out of steam or the production crew run out of stunt men but the fast franchise just gets bigger and better with each instalment. Not that it matters massively to these kind of films but in the Fast universe this film slots in after Fast Five but before the third film The Fast and the Furious: Tokyo Drift and with Fast and Furious 7 set to follow on from Tokyo Drift and out next summer. Confused?  Yes me too.  But if, like me, you haven’t watched all of the preceding films luckily there’s a quick re-cap in the first few minutes through the title scenes.

The usual cast return with Vin Diesel, playing an edgier than ever Dom who rounds up his crew of speed hungry bandits for one more final job.  This time the crew are working with the cops as Dwanye Johnson’s Agent Hobbs enlists the group to help in catch a new bad guy by reeling them in with information on or by offering to find (the plot is a little unclear here) someone who we all thought was dead. It’s Letty and she’s on the wrong side.

This set up establishes the theme of the film as family with never-leave-a-man-behind ideals running throughout. Michelle Rodriguez returns playing well…that Michelle Rodriguez role she does, but a highlight of Fast 6 comes when we finally see her smile. Yes, she can do that – it might need to be seen to be believed though.  The rest of the crew manage to add various relationship stories to the film with a love story, a few good buddy scenes and running comedy playoffs between Tej and both Roman and Hobbs which work very well.

This is a fast paced action film with few pauses. Stunts are bigger, badder and of course more ridiculous than they’ve ever been, yet barely leave a scratch on either the cars or the characters. Set mostly in London we do get the stereotypical American idea of the city; fumbling police officers , lots of red double decker buses  and of course the posher than posh gentleman butler type character too. It’s a little cringey at points but hey, this film isn’t exactly about accuracy is it? Luckily this is one of just a few minor niggles.

Pretty cars, lots of speedy chases, a few girl fights and of course the scene used to promote the movie in all the trailers – a car being launched out of a crashing plane. It ranges from unrealistic to completely ridiculous but it works. So what if cars can’t really do that. Who cares about the laws of gravity anyway? Or that characters seem to have superhuman powers? Just buckle up and enjoy the ride.

New trailer and poster for Riddick

Vin Diesel returns as Riddick for the first time since 2004