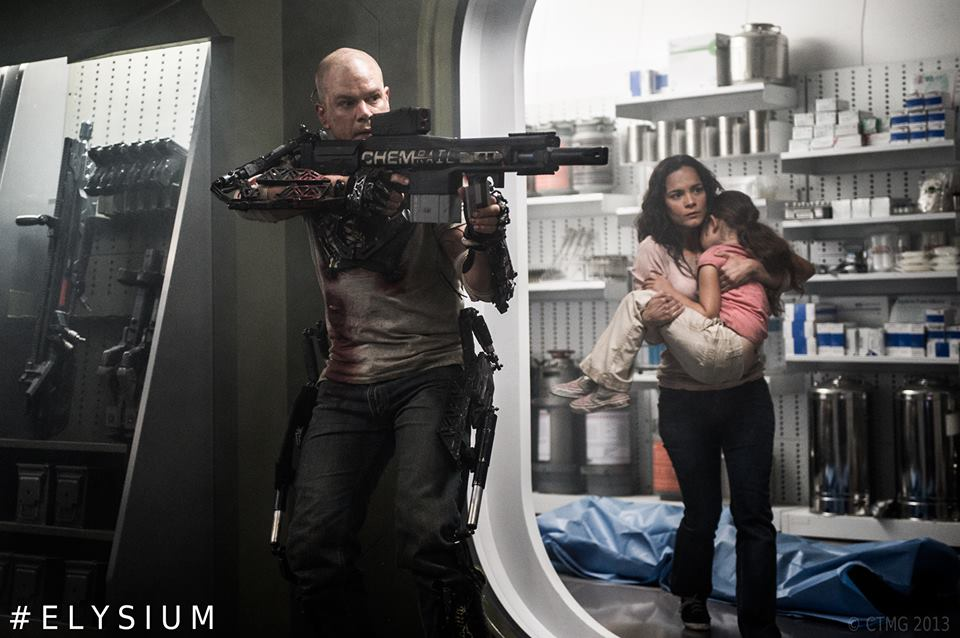 Neill Blomkamp started on the small screen as a visual effects artist on Stargate and Smallville and well and truly stamped his name on the cinematic scene with District 9, a somewhat unconventional film, that showed him to be an up and coming director of the younger generation. After making such an impression back in 2009, how will his new film Elysium affect his big-screen reputation?

In 2154, whilst the poor and sick live on a desolated earth, the wealthy live up in space on a station named Elysium, where they is no sickness, poverty or crime. Max, an ex-criminal, suffers a horrific accident and his imminent death forces him to find a way into Elysium to heal himself.

From the first shot, vivid scenes of a beautiful Elysium and a filthy, polluted Earth manage to symbolise the huge gap between classes within seconds of the film’s beginning. This lasts throughout and a constant stream of impressive visuals makes Elysium a spectacle. From the luscious plains of the artificial world that is isolated amongst the void of space to the vast, baron nature of Earth, Blomkamp visually enchants whilst producing a metaphor for a (perhaps prophetic) class divide in the not-so- distant future.

Complimenting the settings are revolutionary fight scenes and revolutionary it is: exquisitely realistic police robots blown apart by meticulously detailed bullets that explode on impact, all in slow motion to create an jaw-droppingly realistic experience. Intense bursts of violence are interspersed with silence to give the effect of disorientation. Frequent slow motion shots paired with POV angles create a unique experience: Futuristic fight scenes don’t get much better than this.

Neill Blomkamp is no stranger to smuggling ethical themes into violent films and his latest venture is no expectation. For starters, the name ‘Elysium’ refers to the iconic Elysian Fields from Greek mythology (also referred to many other films such as Williams’ ‘Streetcar Named Desire’), which is a heaven-like home where the gods and good people went after death. Just from the title, Blomkamp shows the divide and segregation between the rich, powerful and the poor. District 9 closely clung to the theme of segregation and racial hatred and this also gleams through in Elysium shown in the clear and strikingly realistic attitudes the rich possess.

Elysium is riddled with deep but subtle metaphors that are at the core of the film. Kruger’s (Sharlto Copler) sadistic nature, the man who is ordered to stop Max at all costs, symbolises the worst of both the residents of Elysium and Earth. This is juxtaposed with the extremely ill daughter of Frey, Max’s childhood friend, Matilda: Through her pure childhood innocence, as well as that shown by a young Max and Frey in the opening and closing scenes to a poignant effect, Kruger’s sadistic nature is highlighted and this produces emotive scenes, that parallel intense battles.

Rather than a powerful motif overshadowing the storyline, it compliments it. What begins as a fairly generic plot of a struggling no-body on a near impossible mission is thoroughly enhanced by a strong theme. The seemingly mundane plot transforms into an interesting story that grows each minute and matures to become both emotionally and visually powerful, peaking in the final seconds of the film.

A fantastic cast astutely complements the bold themes Blomkamp expertly uses. Matt Damon shines through with his helpless yet powerful nature, whilst Spider, the mastermind behind the assault on Elysium, is passionate and eccentric in the face of danger. Jodie Foster as Delacourt is hard-nosed and extremely intimidating director of defence and William Ficthner’s Carlyle is chillingly vulgar: two characters that are (ironically) equally, if not more, brutal than the physical violence Kruger uses and are portrayed by their respective actors with such skill.

This exceptionally intriguing film is an eerie apparition of the future; Blomkamp’s vision of what may come of our home planet. He creates a world, both in space and on Earth, which shows the contrasts of the financial divide, through a structured and elegantly detailed prophetic world. With its bold themes, the masterfully intense and visually exceptional battle scenes and the emotionally crushing exchanges between Frey, her daughter and Max, Elysium is prodigiously prolific in many areas of cinema. Rarely is a film so emotive whilst so unbelievably intense, making Elysium a wonderful addition to Blomkamp’s repertoire, surging him to the forefront of the modern sci-fi genre.

Film Review: The Hobbit: The Battle of the Five Armies

Can Dexter Fletcher capture the magic of the musical on the big screen?