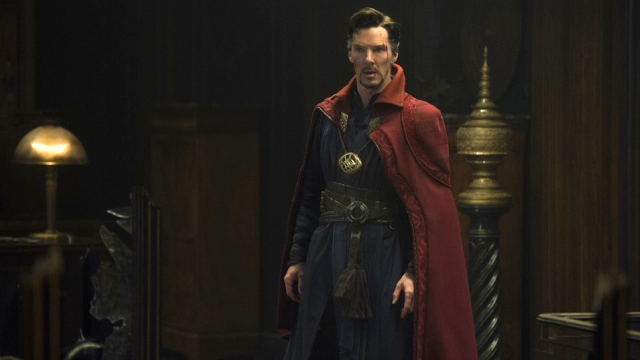 Doctor Strange is a very well made, well performed and ultimately satisfying film. It’s a fairly standard origin story which differentiates itself from its Marvel Cinematic Universe predecessors with the exploration of magic and multiple dimensions. However, despite these differences, it performs the trick of being the most Marvel film ever made, highlighting both the strengths and the weaknesses of their brand of film making. So let’s be slightly petty and run through our Marvel checklist.

Benedict Cumberbatch plays Stephen Strange, the most brilliant, neurosurgeon in all the world. He’s a total genius and can do no wrong in his field of neurosurgery and in no way is he remotely like Tony Stark, nope, not even slightly. The thing is, much as he aspires to be, Cumberbatch is no Downey and therefore the character is neither as likeable or engaging as his Marvel predecessor. He’s good enough though and for anyone who has been missing Hugh Laurie’s performance as House, he manages a fair approximation of that performance. For all that his character goes on a journey, loses everything, opens his mind to a new world, works hard, learns new things, you never really feel any sense of loss. Nor do you feel the character grows really. It’s an interesting journey, but not one that changes the character enough other than his dress sense. It’s nice that they give an origin story to his look though.

How many times can you make the same mistake? Marvel seem to love taking the fine actors, casting them as love interests and giving them nothing to do. Rachel McAdams give it everything but ultimately she is little more than passing romantic interest. She fares worse than even Natalie Portman and Gwyneth Paltrow have done in the past, although isn’t quite as wasted as Judy Greer. Sure, she a strong, independent woman but she really adds nothing to the plot other than being a link back to a lost life. Rachel McAdams deserves to be leading this kind of film and audiences deserve properly fleshed out relationships.

Doctor Strange’s enemy is someone who had exactly the same training as he did but chose the wrong path, one which our hero must not go down despite temptation. Sure, it makes sense that someone who is a really great wizard would be fighting a wizard but I’d rather see him fighting someone with cool robot armour or a Hulk.  Mads Mikkelsen had put in some tremendous performances throughout is career but here, he is very much phoning it in. He should be an amazing villain: terrifying, creepy, slightly sexy but here it’s tough to remember what his character is called. He has some motivation to do a thing with a thing to reach a thing and that would be BAD for everyone. Ultimately, who cares?

Look, there’s an object that has some kind of power. This one does weird stuff with time (oh how I wish for a Marvel time travel film). This one doesn’t really dominate proceedings but it does come in really handy to prevent the end of the world. No doubt, it will come up again in a future movie…well of course it will, it was really well signposted.

You have to hand it to Marvel, they get the talent. Over the years they’ve wasted Sam Rockwell, Hugo Weaving, Toby Jones, Rene Russo and so many more. This time, Tilda Swinton is pretty fantastic as the ageless and wise Ancient One, really giving the character a sense of timeless depth. Similarly Chiwetel Ejiofor brings a brilliant stillness and quiet rage as Mordo, both rival and friend to strange. Benedict Wong as Wong, keeper of the ancient texts, is perhaps the greatest comic relief character now in the MCU and rivals Kat Dennings’ Darcy for best one liner delivery.

Marvel make good films, occasionally great ones when they break the formula. Solid might sound like an insulting word but it’s apt here. There’s nothing particularly bad, just a little disappointing. The visuals are impressive enough but really only serve to remind you of something cooler Chris Nolan did. The formula is twisted enough so the ending isn’t some big blue light in the sky but this is still Marvel playing it incredibly safe. Maybe that’s the right thing to do when establishing a character for the first time and you know, making good films is not easy. Refreshingly, there aren’t any gratuitous cameos here or any great need for foreknowledge so points for making it a standalone. Even so, it all feels very familiar.

If we gave stars, Doctor Strange would be what we’d show our reviewers as the very definition of a three star film. We’ve already started a petition to change the star dictionary.  Within its own scope, the film does everything very well, and builds the world of magic credibly but a lack of ambition means it never feels cutting edge. Still, it’s good enough and and maybe that’s all it needs to be.